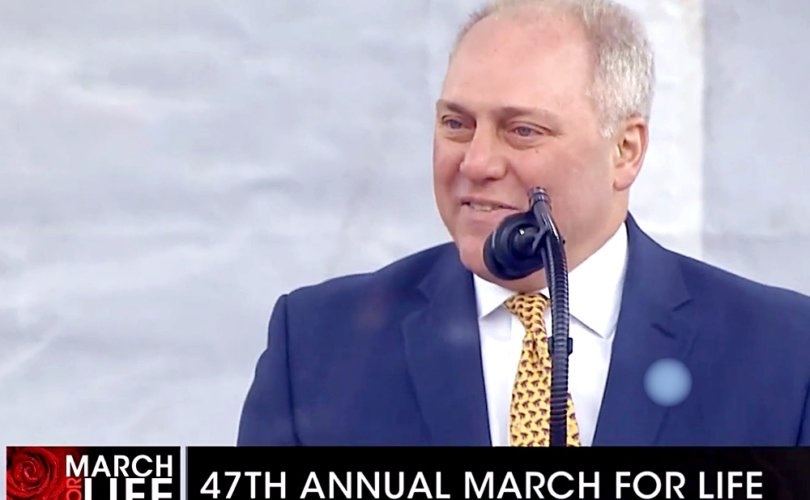 WASHINGTON, D.C., January 24, 2020 (LifeSiteNews) – House Minority Whip Steve Scalise was among the pro-life lawmakers to address the annual March for Life on Friday, taking the opportunity to share with the crowd how they could help House Republicans overcome Speaker Nancy Pelosi’s obstruction of legislation to ban infanticide.

“God has a plan for all of you as well,” said Scalise, who represents Louisiana’s first Congressional district. “That’s why you’re here marching for life.”

He explained the importance of the Born-Alive Abortion Survivors Protection Act (BAASPA), which would require abortionists to transfer infants who survive abortions to hospitals, where they would be given the same degree of care as any wanted newborn. The 2002 Born-Alive Infants Protection Act (BAIPA) recognizes such babies as human beings with human rights, but doesn’t define how specifically to handle them.

In late February, the U.S. Senate voted 53-44 in favor of the bill, falling short of the 60 votes necessary to overcome the current filibuster rules and pass. All but three Senate Democrats opposed the bill, including every senator currently running for president. House Democrats have repeatedly blocked BAASPA from receiving a vote.

“We’ve asked now over 80 times to bring that bill to the floor and (Pelosi has) blocked it every single time,” Scalise said. “But I filed a discharge petition. This is a seldom-used legislative tool to go around Speaker Pelosi and force a vote on the Born-Alive Survivors Act.”

To succeed, the petition requires 218 signatures, of which it currently has 204, including every House Republican and three Democrats.

“Now this should be a bipartisan issue,” Scalise said. “This should be an easy bill to get to the floor … there are a lot of people out there who ran for office saying they would be pro-life. You are not pro-life if you don’t sign the discharge petition.”

He asked the attendees to look up whether their representatives have signed yet on this tracker, and to call and urge them to do so if not.

Only five Democrats voted to support BAASPA when it was first introduced in 2015, and the number of pro-life House Democrats has decreased since then.

Readers can click here to read, sign, and share the LifeSiteNews petition urging the House to vote on the Born-Alive Abortion Survivors Protection Act. Readers can also follow LifeSiteNews’ continuing coverage of the 47th annual March for Life by clicking here.