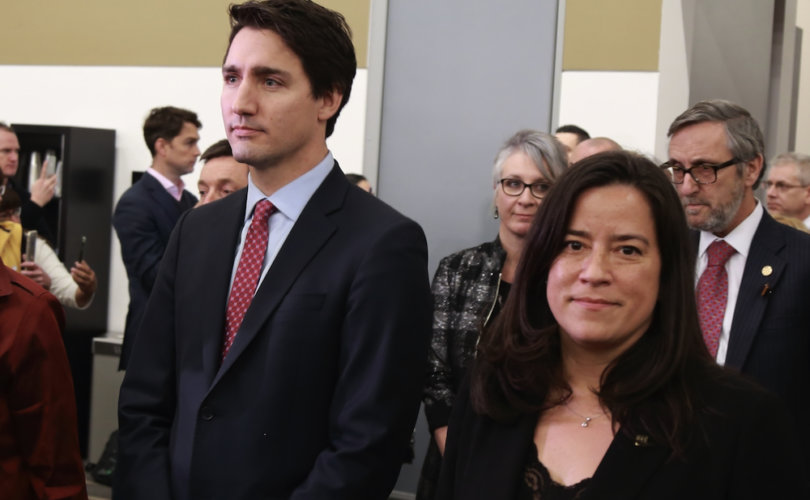 Trudeau announced at a Tuesday press conference he had ejected former attorney general Jody Wilson-Raybould and former Treasury Board president Jane Philpott from his party, and he specifically denounced Wilson-Raybould’s secret taping of her conversation with Canada’s top bureaucrat as “unconscionable.”

Wilson-Raybould’s release of that audio file Friday to the justice committee appears to have definitively turned her colleagues against her, with a number of them subsequently calling openly for her expulsion, CBC reported.

Indeed, the Liberal caucus gave Trudeau a standing ovation after his announcement, Global News reported, prompting Conservative leader Andrew Scheer to excoriate ruling party MPs as sending the “clear message: If you tell the truth, there is no room for you in the Liberal Party of Canada.”

Liberal MPs “have let Canadians know where they stand,” Scheer said in a Facebook post. “They have chosen to condemn colleagues who spoke truth to power and to prop up a prime minister who is drowning in scandal.”

And Trudeau suffered immediate backlash Wednesday when about 50 of the 338 young women visiting Parliament as part of the program Daughters of the Vote turned their back on him while he was speaking in the House of Commons, a revealing image now spreading swiftly across social media, multiple media sources reported.

Wilson-Raybould and Philpott said Wednesday that they had no regrets over their conduct in the affair, the Globe and Mail reported.

Wilson-Raybould has also defended releasing the tape of her December 19 telephone conversation with former Clerk of the Privy Council Michael Wernick, who in the wake of the scandal announced March 18 he would retire, a departure that will take effect April 19.

“I do not believe that I should be removed from caucus for doing my job and for doing what I believe is right,” she told reporters Monday evening, according to CBC.

She taped the conversation because she had reason to believe it would be about SNC-Lavalin, the Montreal-based global engineering firm at the center of the scandal, and she needed to protect herself in an “extraordinary situation,” Wilson-Raybould said.

Wilson-Raybould testified before the justice committee last month Trudeau and top Liberal officials — including Wernick — exerted a “consistent and sustained effort” over four months to “inappropriately” pressure her to interfere in the criminal prosecution of SNC-Lavalin, which is facing bribery and corruption charges in connection with past government contracts in Libya.

A criminal conviction could bar the firm from receiving federal contracts for 10 years, and SNC-Lavalin has lobbied strenuously for a deferred prosecution agreement rather than a trial. As a result, Liberal finance minister Bill Morneau inserted the DPA option into his omnibus budget bill, which passed in June 2018, according to the CBC.

Trudeau moved Wilson-Raybould out of justice in January to veterans affairs, and she resigned from the cabinet in February.

The Liberal-dominated justice committee voted to shut down its investigation of the affair last month and did not allow Wilson-Raybould a second appearance to respond to testimony by Gerald Butts, Trudeau’s longtime friend who resigned as the prime minister’s chief of staff came in the early days of the scandal.

In response, Wilson-Raybould sent the committee a package of materials, among them the recording of her 17-minute conversation with Wernick in which he says Trudeau believed he was not asking Wilson-Raybould to interfere but to use the legal resources she had to secure a DPA for SNC-Lavalin, according to the National Post.

Wernick said the prime minister “is in a very firm mood about this” and would find a way to “do this one way or another,” reported the CBC.

Wilson-Raybould asked if Trudeau understood the “gravity” of what he was asking. “This is not just about saving jobs. This is about interfering with one of our fundamental institutions,” she said.

“Well, I don’t think he sees it as that,” Wernick said.

“Well then, nobody is explaining that to him, Michael,” Wilson-Raybould replied. She also warned Wernick the conversation was inappropriate.

Wilson-Raybould said Monday that she felt free to release the tape because Wernick was not “a member of the Liberal caucus, he’s not my client by his own admission,” and she had been told by a “trusted adviser” that “it was a reasonable, rational thing to do in an unreasonable and irrational situation,” the CBC reported.

Trudeau said Tuesday that he was expelling Wilson-Raybould and Philpott, who resigned over her lack of confidence in the Liberals’ handling of the affair, from caucus over “broken” trust.

“The trust that previously existed between these two individuals and our team has been broken, whether it’s taping conversations without consent, or repeatedly expressing a lack of confidence in our government or me personally as leader,” he said.

“Rather than acknowledge the obvious — that a range of individuals had inappropriately attempted to pressure the former attorney general in relation to a prosecutorial decision — and apologize for what occurred, a decision was made to attempt to deny the obvious — to attack Jody Wilson-Raybould’s credibility and attempt to blame her,” she wrote in a Facebook post.

Current Liberal attorney general David Lametti indicated in March that he has not ruled out the possibility of a deferred prosecution agreement for SNC-Lavalin, or if he is open to reconsidering the case, the CBC reported then.