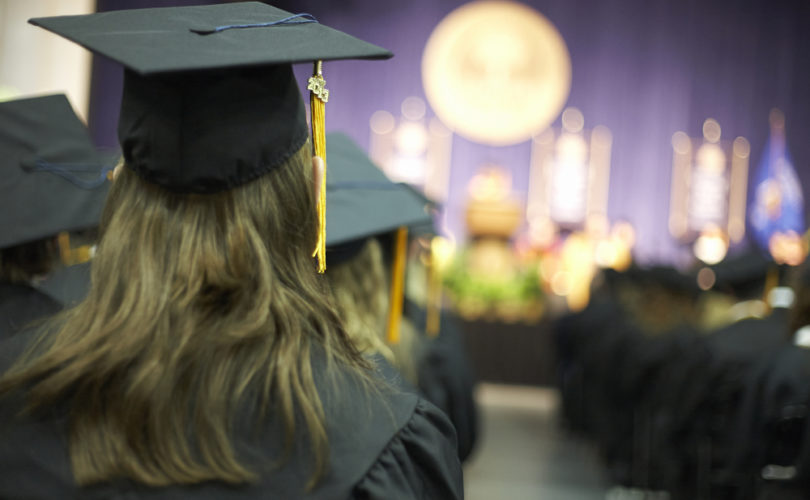 April 23, 2015 (CardinalNewmanSociety.org) — At least eight Catholic colleges have announced scandalous speakers or honorees at their 2015 commencement ceremonies, according to The Cardinal Newman Society’s annual review of college graduations.

Many colleges wait to release the names of their honorees and speakers, so it is too soon to know if this represents an improvement over last year’s report, which exposed at least 20 scandalous commencement ceremonies.

In 2004, the United States Conference of Catholic Bishops (USCCB) released a document requiring Catholic institutions to withhold honors and platforms from public opponents of Church teaching. The document, Catholics in Political Life, stipulates:

The Cardinal Newman Society has identified the following Catholic colleges that are acting in direct contradiction to their Catholic mission of education:

College of Our Lady of the Elms (Elms College) in Chicopee, Mass., will host Congressman John Lewis of Georgia as the College’s 2015 commencement speaker on May 16. As previously reported by the Newman Society, the College chose Lewis for his “personal and political focus on civil rights,” despite a consistent pro-abortion voting record. He earned 100 percent ratings with the National Abortion Rights Action League (NARAL) Pro-Choice America in 2013 and 2014. Lewis voted against banning partial-birth abortions, barring minors from crossing state lines to procure abortions, and requiring minors to involve responsible adults before having an abortion. Lewis also co-sponsored the Women’s Health Protection Act, which would effectively prohibit medical professionals from recommending ultrasounds or other procedures to women considering abortion. Additionally, he voted in favor of increased federal funding for contraception and embryonic stem cell research.

Hilbert College in Hamburg, N.Y., will award an honorary doctorate of humane letters and host Lieutenant Governor of the State of New York and former Congresswoman Kathy Hochul as commencement speaker at the College’s 2015 commencement ceremony on May 16. Hochul has publicly declared her support of abortion and has gained the full endorsement of NARAL Pro-Choice New York. According to On The Issues, NARAL’s Executive Director described Hochul as “a powerful counterpoint to the opponents of women’s health care” and declared that Hochul would “stand up to those who would deny women access to critical health care services,” such as abortion. “I will fight alongside NARAL Pro-Choice New York to ensure women have access to safe and adequate health services, without any interference from the federal government,” Hochul reportedly responded, adding that she was “deeply grateful” for NARAL’s support. During her 2011 run for Congress, Roll Call reported that Hochul was endorsed by EMILY’s List, an organization that financially supports pro-abortion women politicians in elected positions. According to OpenSecrets.org, Hochul received $68,445 from EMILY’s List during 2012. Additionally, she earned a 100 percent rating with NARAL Pro-Choice America in 2012.

Loyola University New Orleans will honor former National Football League (NFL) commissioner Paul Tagliabue with an honorary degree at the University’s commencement ceremony on May 9. Tagliabue has publicly advocated for same-sex marriage and given thousands of dollars to the cause. In 2012, he and his wife donated $100,000 to a same-sex marriage campaign in Maryland. “[T]his is the time not to view this as an expense, but as a capital investment in our nation’s infrastructure,” said Tagliabue at the Marylanders for Marriage Equality fundraiser, according to the Washington Blade. He made a $1 million gift to support the LGBTQ Resource Center at Georgetown University, which has been a significant challenge to the University’s Catholic identity.

Sacred Heart University in Fairfield, Conn., will award an honorary Doctor of Laws degree and host former Senator George Mitchell as commencement speaker on May 17, despite his legacy of pro-abortion support. Mitchell is infamously remembered as a sponsor of the Freedom of Choice Act, which would have made abortion protection mandatory in state and federal laws. According to Chicago Tribune, Mitchell derided the Supreme Court’s 1992 ruling in Planned Parenthood v. Casey, saying it rests “on assumptions about women’s decision-making power that are more suited to the 19th Century than to the present day. The state restrictions upheld rest on a premise that women cannot be trusted to make decisions about childbearing for themselves, that they need government direction.”

Saint Joseph’s University in Philadelphia, Penn., will host Philadelphia Mayor Michael Nutter as the undergraduate commencement speaker and present him with an honorary degree on May 16. Earlier this year, Nutter officiated a ceremony granting marriage rights at Philadelphia City Hall to a same-sex couple— Israeli diplomat Elad Strohmeyer and his partner. According to the Jewish Exponent, Strohmeyer called the mayor’s involvement a “once-in-a-lifetime opportunity” and cited Nutter’s legacy of promoting “LGBT interests in Philadelphia.” In 2011, Nutter launched a campaign to provide free condoms to youth in Philadelphia. In May 2013, Nutter touted the fact that Philadelphia offers “safe” abortion services in the wake of the trial of abortionist Kermit Gosnell.

Saint Mary’s College of California will feature Chris Matthews, host of the MSNBC show Hardball with Chris Matthews, at the College’s 2015 commencement ceremonies according to Inside Higher Ed. Matthews has publicly stated his support of abortion and his opposition to the Church’s teaching of life beginning at conception. As previously reported by The Cardinal Newman Society, Matthews once said about the Church’s stance on marriage, “If you're really anti-gay, you become a Catholic now.” Matthews has compared efforts to regulate the practice of abortion to Jim Crow laws that enacted literacy tests in the South aimed at preventing African Americans from voting. He reportedly told pro-life Republican Ken Blackwell that if pro-lifers want “to stop the number of abortions in this country,” then one step would be to “help people get birth control procedures available to them.” Speaking of the rights of the unborn, Matthews reportedly said, “Pursuit is a word, an active verb. I don’t think you'd associate that with a fetus. And certainly liberty is a word you would apply to people who are alive and born. I don’t know what it means to say an unborn person has liberty. I don’t even know how the Constitution, you could possibly catch up in its original intent to what these people are talking about.” Matthews also reportedly compared pro-lifers to terrorists. In 2003, when Matthews was honored at commencement ceremonies at both The College of the Holy Cross in Worcester, Mass., and the University of Scranton in Pennsylvania, Worcester Bishop Daniel P. Reilly and Scranton Bishop James Timlin boycotted the ceremonies.

Saint Peter’s University in Englewood Cliffs, N.J., has selected Cornell Brooks, president and CEO of the National Association for the Advancement of Colored People (NAACP), to serve as the commencement speaker for the University’s 2015 class and recipient of an honorary Doctorate of Humane Letters on May 18. The NAACP advocates for same-sex marriage, and although Brooks is also a minister in the African-American Episcopal Church, which has consistently voted against supporting same-sex marriage, Brooks has indicated that he would “defend” the NAACP’s position.

Xavier University of Louisiana will honor Mary Landrieu, Eric Holder, and Earvin “Magic” Johnson as commencement speakers, as well as award them with honorary degrees, on May 9. As previously reported by the Newman Society, the University’s commencement lineup has already come under fire from Archbishop Gregory Aymond of New Orleans, who expressed that he was “disappointed” in the administration’s decision and warned that “some of those to be honored do not represent the values and teachings of the Catholic Church.” Landrieu is endorsed by EMILY’s List and earned a 100 percent NARAL rating in 2013 and a 90 percent rating in 2014 (for missing a vote). Holder has consistently defended the Obama administration’s controversial HHS mandate, which forces mandatory insurance coverage of contraceptives, sterilization, and abortifacients, regardless of conscientious or religious objection. Holder has also played a major role in attempting to coerce the Little Sisters of the Poor to accept the mandate. And Johnson, according to the Times-Picayune, “is an outspoken advocate for HIV/AIDS prevention and safe sex,” indicating contraceptive support.