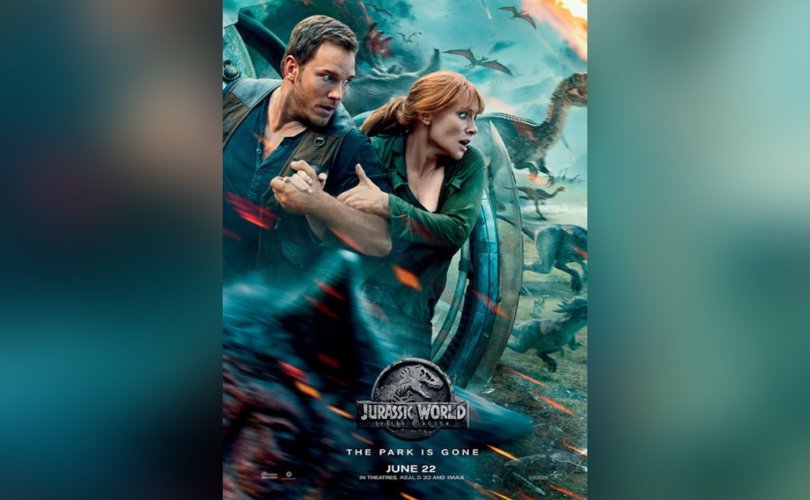 June 21, 2018 (LifeSiteNews) – Yet another Hollywood blockbuster has left a scene of gratuitous LGBT “diversity” on the cutting room floor.

“Jurassic World: Fallen Kingdom,” the fifth installment in the “Jurassic Park” franchise, opens this weekend in American and Canadian theaters. But a scene revealing a main character to be lesbian was cut from the film, Vulture reports.

“It’s me and Chris Pratt and we are in a military vehicle with all of these mercenaries,” Pineda describes the deleted scene. “I look at Chris and am like, ‘Yeah. Square jaw. Good bone structure. Tall. Muscles. I don’t date men, but if I did, it would be you. It would gross me out, but I would do it.’”

Pineda said the scene was “cool, because it was a little insight into my character,” but did not attribute its removal to any political or moral motivation on the part of director J.A. Bayona or Universal Pictures. “I understood why they cut it — for [the] sake of time,” she said.

But while Pineda has no hard feelings about the cut, the same can’t be said of the pro-LGBT media.

“Summer movie fans, it is my somber duty to inform you: we have been robbed,” Mashable’s Alison Foreman announced, noting that the film opened in the middle of LGBT “Pride” Month. “Thanks for noticing,” she added.

The pro-homosexual lobbying group GLAAD released a report last month attacking Hollywood for such incidents, as well as for decreasing its overall LGBT output from previous years. Hollywood’s reluctance to promote homosexuality in big-budget films, despite its willingness to do so on television, may be an attempt to appeal to the lucrative Chinese market, but there is reason to suspect domestic audiences are increasingly wary of “representation” in entertainment.

In March, GLAAD found that America’s LGBT acceptance has actually begun to decrease, which conservatives attribute to the LGBT lobby’s transition from “live and let live” arguments to infringing on the religious, conscience, and privacy rights of Americans who disagree with them. This year, Marvel Comics canceled all three of its comic book series that won GLAAD awards in 2017, citing poor sales. Last year, comic retailers excoriated the publisher for hurting their business with several comics’ political and “social justice” emphasis.

“Jurassic World: Fallen Kingdom” has already made $420 million internationally and is projected to make between $135 and $150 million domestically this weekend, though critical reviews are mixed.