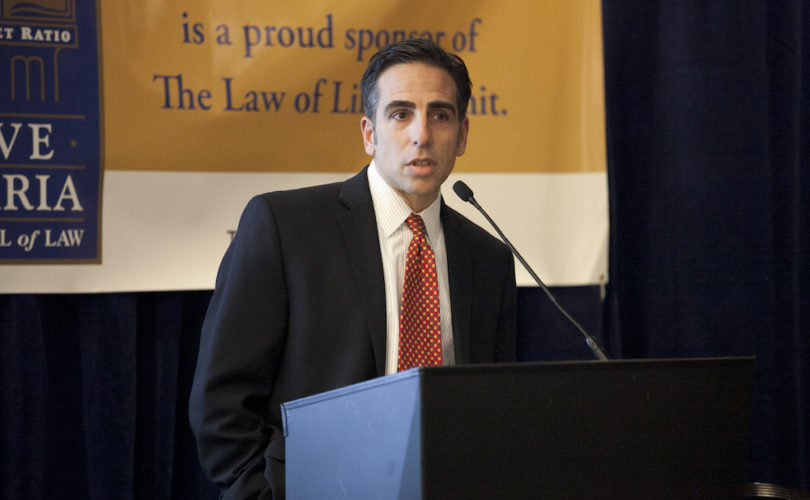 HERNDON, Virginia, July 19, 2016 (LifeSiteNews) —The American healthcare system puts “so many medically vulnerable at risk” and it’s imperative that people educate themselves so that they can protect their loved ones in a culture of death, the brother of Terri Schiavo told LifeSiteNews.

In an exclusive video interview at the 2016 National Right to Life Convention, Bobby Schindler, the brother of Terri Schiavo, said he never thought his sister would be dehydrated to death when family members were so willing to care for her. Terri’s case became one of the most famous in the United States when her estranged husband sought to stop Terri, who was brain-injured, from receiving food and water. After a long legal battle, Judge George W. Greer ordered that Terri be deprived of food and water. She died of dehydration on March 31, 2005, after 13 days without food or water.

“I didn’t think, when there was a family that was willing and wanting to care for their daughter, their sister, that there would be any judge that would decide that it would be better off to … kill this person,” Schindler said. “And kill them in such a brutal and inhumane way by starving and dehydrating to death.”

Since Terri’s death, “we’ve learned so much” and it’s becoming apparent that “the healthcare system is getting worse,” Schindler said. He now runs the Terri Schiavo Life & Hope Network, which advocates for patients’ rights and has assisted more than 1,500 medically vulnerable patients and their families.

It’s important for people to know their rights and understand what many terms surrounding end-of-life care actually mean, Schindler said.

“Too many people out there don’t understand or know what to do until they’re put in these positions and oftentimes it could be too late,” he said.

Schindler stressed that patients or families of patients are never obligated to listen to what only one doctor says. They should feel free to seek second opinions and continue caring for their loved ones despite what doctors or hospital ethics committees say, he said.

“Find out exactly what your rights are … become a voice for that person,” Schindler said, and “stop at nothing” to ensure he or she is adequately cared for.

Schindler said those facing healthcare crises need “caring, compassion, and love,” and that those threatened by physician-assisted suicide should be reassured that they are not burdens.

“Killing’s never the answer,” he said. “Our role and our job as family members is to care [for] and love these people.”

Physician-assisted suicide has been legalized in California, Oregon, Vermont, and Washington state. In 2014, a 29-year-old woman with brain cancer named Brittany Maynard made international headlines when she killed herself. Since then, advocates of expanding the practice have begun an aggressive push to legalize doctor-assisted suicide in more states.