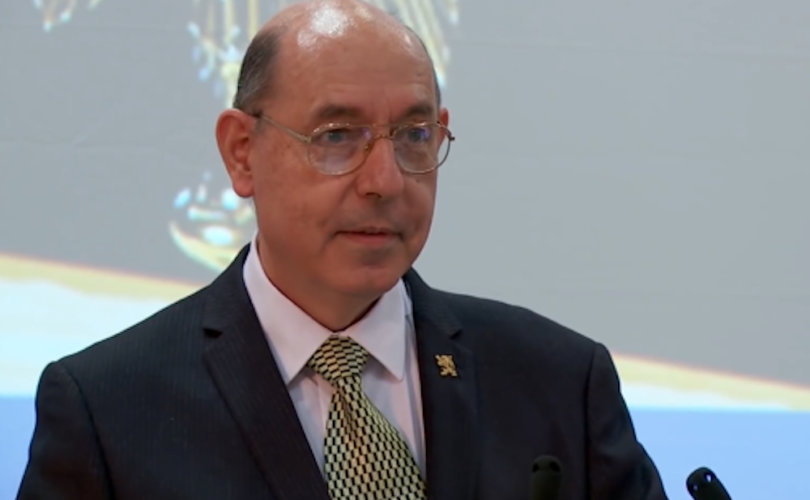 Note: On Oct. 4, 2019, Voice of the Family, a coalition of pro-life and pro-family organizations, hosted a roundtable discussion in Rome to address critical questions for the Church and for the family on the eve of the Synod of Bishops for the Pan-Amazon region. Read LifeSiteNews’s report on this event here. Below is the full address given by José Antonio Ureta.

In his work Revolution and Counter-Revolution, Plinio Corrêa de Oliveira explains that it was pride and sensuality, whose satisfaction is the pleasure of pagan life, which provoked Protestantism. The triumph of sensuality was affirmed by the introduction of divorce and the suppression of ecclesiastical celibacy, while pride led to the denial of the hierarchical priesthood, reducing it to a mere delegation of the common priesthood of the faithful.

The Council of Trent dealt a decisive blow to the claims of Lutheranism by defining the sacramental and indissoluble character of marriage and the divine foundation of the ecclesiastical hierarchy, based on the sacrament of the Order.

Pope Francis’s Amoris Laetitia enacted the practical acceptance of divorce by the Catholic Church. The virtual abolition of ecclesiastical celibacy is requested in paragraph n. 129 of the instrumentum laboris for the coming synod. The extension of such “experience” to the rest of the Church would be a matter of time.

But a neo-Lutheran offensive against priesthood and the hierarchical character of the Church has also been underway since long ago. In 1973, the Eighth Week of Theology in Kinshasa already claimed for “a new structuring of the ministries” and expressed “the desirability of ordering lay people for the presidency of the Eucharist.” Shortly after, French Jesuit Joseph Moingt envisioned such restructuring through a bipartition: a few celibate priests, trained in seminaries, would exercise a permanent, universal ministry, touring the communities, while laymen would rotationally ensure the presidency of the Eucharist in each location.

Liberation Theologian Leonardo Boff rehashed that “the power of Christ (exousia) lies not only in some members, but in the totality of the People of God” and that “all services arise within the community and for the community.” Consequently, “the head of the community by its ad hoc delegation” should “preside over the Lord's Supper.”

In reply to all this nonsense, Cardinal Joseph Ratzinger wrote an article for L’Osservatore Romano, stressing the need to avoid “an undervaluing of the ordained ministry and a falling into a ‘Protestantization” of the concepts of ministry and even of the Church herself.”

This and other Vatican interventions did not prevent the reappearance of the old Lutheran hat of a delegated priesthood of the community under the pen of His Excellency Fritz Löbinger, bishop emeritus of Aliwal (South Africa), who foresees, as a solution for the lack of vocations, two forms of priests, the “community priests” and the “diocesan priests”, similar to those imagined by Fr. Moingt 50 years ago. To stress the difference between these two models, a team of community leaders should be ordered simultaneously and assume the responsibilities together, with the advantage of preserving their commoners’ lifestyle. It is “possible to combine two things: a secular profession and the priesthood,” Löbinger claims, because “there are thousands of part-time presbyters in various Christian denominations.”

The practical details of Löbinger’s formula were given by Pope Francis during an aerial interview back from Panama: “One could ordain an elderly married man, but only so that he exercises the munus sanctificandi, that is, that he celebrates Mass, that he administers the sacrament of Reconciliation and performs the Anointing of the Sick. Priestly ordination gives the three munera: regendi — to govern, the pastor — docendi, to teach — and sanctificandi. This comes with ordination. The bishop would only give the faculties for the munus sanctificandi: this is the thesis.”

This thesis was transliterated into paragraph no. 127 of the instrumentum laboris. It says Amazonian tribes have a “high sense of equality” by which “authority is rotational” and “clericalism is not accepted in all its guises,” and thus invites one “to reconsider the notion that exercise of jurisdiction (power of government) must be linked in all areas (sacramental, judicial, administrative) and in a permanent way to the sacrament of Holy Orders.”

The German priest Paulo Suess, a member of the synod preparatory team and one of the editors of the first Lineamenta, later insisted on the communal aspect of the proposal: “We can imagine a group of viri probati who collectively celebrate the Eucharist. The Church summons them and instructs them to do in common what none of them can do alone [sic!]. The link with the community and for the community, within a diocese and a parish, can make the Church a ‘community of communities.’”

The Lutheran character of such new ministries emerging from the community is evident in no. 138 of the instrumentum laboris in which the evangelical pastors are praised for having “formed small communities with a human face, where people feel personally valued” and for remaining “people like the others, easy to meet, who live the same problems and become ‘closer to’ and less ‘different from’ the rest of the community.” These Protestant pastors, continues the document, “are showing us another way of being church where the people feel that they are the protagonists and where the faithful can express themselves freely without censorship or dogmatism or ritual disciplines.”

If the Synod Fathers and Pope Francis clearly or ambiguously approve paragraph no. 127 of the instrumentum laboris, neo-Lutheranism will have defeated the Council of Trent. But, alas! such a new ecclesiastic structure based on a non-ministerial and non-hierarchical priesthood will no longer be the Catholic Church (1).

(1) A thorough exposition of this subject may be found in four articles I published in the Pan-Amazon Synod.