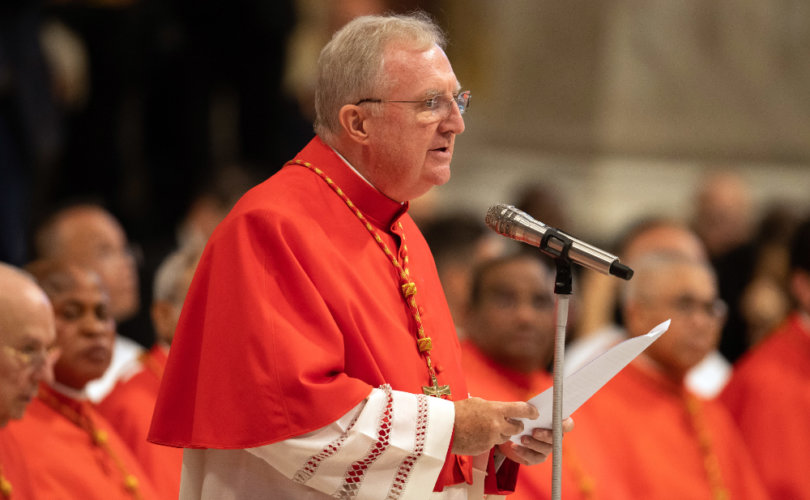 VATICAN CITY (LifeSiteNews) — Traditional Catholics, scholars, and theologians have firmly rejected recent comments made by the head of the Vatican’s liturgy department, when he suggested that devotion to the Latin Mass is a mark of being “more Protestant than you are Catholic.”

This past weekend, when Pope Francis bestowed the red hat on Archbishop Roche and made him a cardinal, the head of the Congregation for Divine Worship and the Discipline of the Sacraments (CDW) gave two interviews in which he strongly attacked devotees of the Church’s Tradition and the traditional Mass.

Speaking to The Tablet and the National Catholic Reporter, Cardinal Roche said that the Novus Ordo Mass was part of a necessary “reform,” and any opposition to it, or the Second Vatican Council, meant that people were at risk of becoming “becoming more Protestant than you are Catholic.”

Mentioning the celebration of Mass as a “point of unity” with the Pope, Roche added: “If you take that seriously, then it raises for all of us an examination of conscience with regard to how we view that: Is that really something that we view seriously, or are we trying to create another church? Are we trying to be Protestant instead of Catholic?”

READ: Cdl. Roche: Devotion to the Latin Mass instead of Novus Ordo is ‘more Protestant than Catholic’

Cdl. Roche: “In the end people have to ask themselves: am I really a Catholic or am I more of a Protestant?”

This is rich, considering that six Protestant ministers helped create the New Mass! Read all about it, courtesy of @LouisTofari and @remnantnews: https://t.co/VTMFfBsiLl https://t.co/S2UcHIar11

Speaking to LifeSiteNews, Dr. Joseph Shaw – the Chairman of the Latin Mass Society of England and Wales and President of Una Voce International – highlighted the example of the English martyrs. “Cardinal Roche rightly points out the characteristic of English Catholic resistance to Protestantism during the period of persecution combined fidelity to the Mass with attachment to the Office of the Pope,” he said.

These are also very strong traits of the traditional movement, including the Una Voce Federation, representatives of which (as he says) he has been meeting. These, like our heroic predecessors, are firmly attached to the Church’s ancient liturgical tradition, and are so concerned with the Office of the Pope that we refuse to content ourselves with celebrations which are canonically irregular, such as those of the Society of Pius X.

Dr. Shaw noted how the cardinal “seems to suggest that this makes us Protestant, but I have never read that followers of Luther and Calvin travelled to Rome to beg the Holy See to allow them to use ancient Catholic liturgical forms.”

“But we have done this,” he added, “and come to that representatives of the SSPX have done the same thing.”

Shaw suggested that “it is difficult to avoid the impression that some in Rome would prefer it if our attitude was indeed more Protestant.”

If we really did set up our own parallel churches, we would stop bothering them, and perhaps they would start talking about intercommunion and ecumenical respect. As it is, we are like the children of the house who are locked in the cellar while the parents are entertaining strangers upstairs.

In line with Dr. Shaw’s consternation, a Dominican theologian described the cardinal’s comments as “regrettable,” saying “one wonders how he can imply that the traditional Roman Mass cannot serve as a vehicle of evangelisation, when it has been the means of evangelising much of the world. Has human nature mysteriously changed since the evangelisation of the new world in the 16th century, or the evangelisation of sub-Saharan Africa in the 19th and 20th?”

In email comments to LifeSite, the Dominican observed that while Roche spoke of Vatican II, “evidently, this council did not lay down as a law that Catholics should attend the Mass of Pope Paul VI, since this Mass was not promulgated until some years after the council had ended.”

“On the other hand,” he said, “the council did state that the Church wished to preserve all lawfully existing rites, and to foster them in every way.”

This is exactly what the so-called “traditionalists” are doing in regard to the beautiful and dignified Roman rite, and they should therefore be warmly commended as loyal sons of the Church. The council also stated, in regard to the liturgy, that “there must be no innovations unless the good of the Church genuinely and certainly requires them; and [that] care must be taken that any new forms adopted should in some way grow organically from forms already existing.”

“It is, to say the least, arguable that the Mass of Pope Paul VI violates these requirements, and that it is therefore incompatible with the liturgical norms of the second Vatican Council,” he added.

“Cardinal Roche mentions the glorious martyrs of the English reformation. I have no doubt that they would have been deeply saddened if they had been shown a vision of a typical Mass today,” continued the theologian. “Who can imagine St. Edmund Campion saying a Eucharistic prayer composed in a restaurant, or St. Margaret Clitherow volunteering to give out the chalice?”

— Article continues below Petition —
PETITION: We won't give any money to liberal bishops who attack the Faith
Show Petition Text
12154 have signed the petition.
Let's get to 12500!
Thank you for signing this petition!
Add your signature:
Show Petition Text

With its table altars, vernacular, priest facing the people and communion in the hands the English martyrs would think it a Calvinistic communion service

They would assume that Roche was an apostate https://t.co/y3XtroDmWD

Indeed, writing on traditional blog Rorate Caeli, liturgist Dr. Peter Kwasniewski extensively highlighted that “the liturgical reform after Vatican II — going far beyond the conciliar remit — emulated, in dozens of ways, the liturgical “reforms” fashioned by Cranmer and imposed on England by its rulers. The Book of Common Prayer was a revolution in the lex orandi so that it might reflect and promote a Protestant lex credendi.”

Pointing to a 2001 lecture given by then Cardinal Joseph Ratzinger, Kwasniewski wrote that “not only Cranmer’s actions, then, but Luther’s theology also influenced the architects of the Novus Ordo.”

“An explicit intention of the modern Catholic liturgical reforms was an ecumenism designed to bring Catholics and Protestants together,” added Kwasniewski, who is soon to publish a book – The Once and Future Roman Rite: Returning to the Latin Liturgical Tradition after Seventy Years of Exile – which highlights, among other aspects, how the “the original Protestants” mirror “their latter-day descendents in the radical wing of the Liturgical Movement that produced the Novus Ordo.”

He noted also the testimony of philosopher Jean Guitton, a close personal friend of Paul VI, who recounted “there was with Paul VI an ecumenical intention to remove, or at least to correct or to relax what was too Catholic, in the traditional sense, in the Mass, and, I repeat, to bring the Catholic Mass closer to the Calvinist Mass.”

Meanwhile, Cardinal Roche did not respond to LifeSite’s questions over the weekend regarding his restrictions on the Latin Mass, and the possibility of lifting them, deflecting all responsibility to Pope Francis.