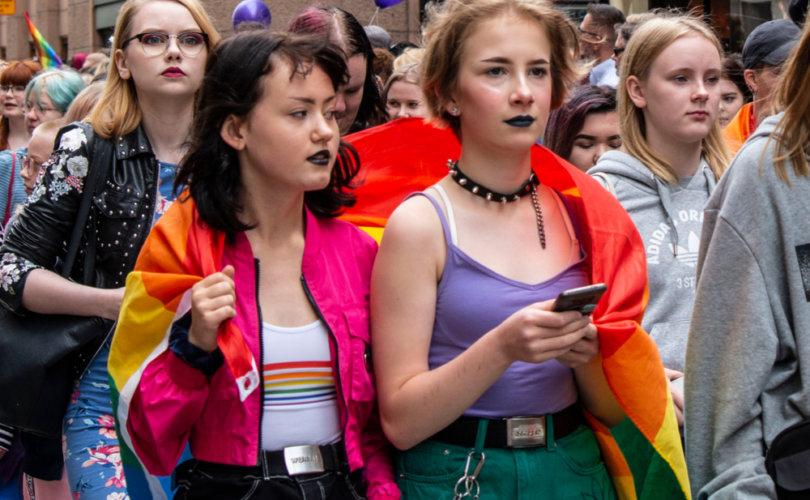 HAMILTON, Ontario (LifeSiteNews) — An Ontario school board issued a new dress code allowing students to expose everything but their nipples and groin area after students complained that the previous dress code was “outdated” and “sexist.”

The Hamilton-Wentworth District School Board (HWDSB) released the new guidelines last Tuesday after a motion was brought forward by student trustees and was passed during a Monday evening board meeting.

The motion was passed after approximately 200 students gathered outside Waterdown High School in protest after an announcement by the school principal that reminded students to cover their shoulders and stomachs. Many students were unhappy about the nature and timing of the announcement, which came only two days after police investigated claims of sexual assault and sexual harassment at the school.

“I definitely felt targeted after the announcement that the principal made towards the girls. I was kind of confused, I didn’t know if they were blaming us or telling us to cover up because it was it was very poorly timed,” one student said.

The principal later apologized, saying “the timing of the announcement was insensitive to the ongoing concerns about sexual assault.”

HWDSB trustee Maria Felix Miller told CP24 that the new dress code “was the culmination of student trustees communicating and really amplifying the voice of students across the board, letting us know that our outdated policy and the way [it was] enforced at schools [was] problematic. It caused harm and a review [was] long overdue.”

Miller also argued that the previous dress code was discriminatory toward “female-identifying” students.

“What we’re hoping to do in the spirit of the motion is really to make sure that we are allowing our students to express themselves in a way that they feel is most appropriate for how they identify,” she said.

A letter to students and parents posted on the school’s website last week states that “decisions about dress reflect individual expression of identity, socio-cultural norms, and economic factors and are personal and important factors to a person’s well-being and health. Students have a right to express themselves.”

The letter, which is infused with gender ideology, claims that the dress code was adopted with a view to being more inclusive of female as well as “non-binary” students.

“Recent events in schools have shown that in the absence of system direction, schools may have been enforcing an outdated dress code in a disproportionate manner that targets female-identified students without considering non-binary views and identities. This is a violation of the Human Rights Code,” it said.

The newly released guidelines state that students may wear tops that expose arms, shoulders, stomachs, midriff, neck lines, chest, and straps as long as they cover the nipples, as well as bottoms that expose legs, thighs and hips and expose straps and waistbands as long as the groin and buttocks are covered.

“We’re not discriminating against one group over another group. There’s no value assigned there, we’re just acknowledging that people have bodies,” Miller explained.

According to CHCH news, the high school said the new guidelines will “use the principles of anti-oppression, anti-racism, anti-colonialism, equity and inclusion.”

CHCH news also reported that the Hamilton board is following the lead of the Toronto District School Board, which recently acknowledged that some dress-codes are “sexist,” or “triggering to students who are non-binary” and “often even racist.”