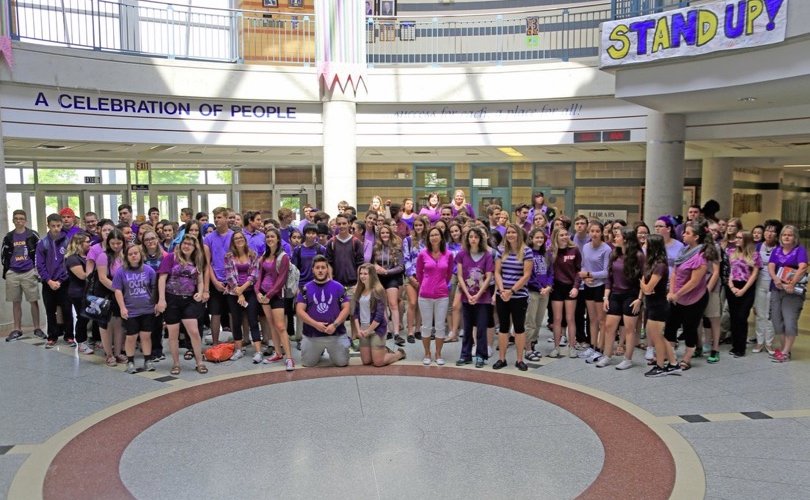 Students at St. Benedict Catholic Secondary School in Cambridge, Ontario dress in purple to 'stand up to homophobia.'Twitter / @danwittwcdsbca

WATERLOO, Ontario, June 16, 2016 (LifeSiteNews) — A Catholic school board in Ontario has used the tragedy of the massacre of 49 people at an Orlando gay night club last weekend to push the acceptance of homosexuality on students.

The Waterloo Catholic District School Board asked all students and staff to wear purple shirts and for school flags to fly at half mast on Thursday as a way to “stand up to homophobia and all hate crimes” and to be in “solidarity with all LGBTQ persons.”

“It will also be a way to signal that we must stand up to homophobia and all hate crimes, and give visible witness to our faith which teaches us about inclusion, kindness and peace,” wrote Director of Education Loretta Notten in a July 14 email to staff, students, and parents.

The Catechism of the Catholic Church teaches that persons with same-sex attraction must be “accepted with respect, compassion, and sensitivity,” but it calls homosexual acts “intrinsically disordered” since they are “contrary to the natural law” in that they “close the sexual act to the gift of life.” Like all Christians, the Church calls people with this attraction to live a life of chastity.

The mainstream media and homosexual movement have portrayed the shooting as an outgrowth of “religious fundamentalism,” with many using the attack to criticize pro-family advocates.

However, as facts emerge, it's unclear that the shooter, Omar Mateen, was even motivated by hatred of homosexuals. Mateen was purportedly a homosexual himself who frequented gay bars and gay online chat rooms. The radical Islamist, who pledged allegiance to ISIS during a 911 call in the middle of his rampage, had previously scoped out several locations for his planned act of violence, including Disney World, but ultimately chose the club for reasons yet unknown.

While Mateen’s motives for the shooting have yet to be determined, an emerging picture of the 29-year-old man reveals a troubled individual who hated the West and everything it stood for and who resorted to an act of terrorism to make his point known.

Parent Michelle Runstedler was outraged that the board would use the tragedy to push the controversial political agenda of a small minority on students while ignoring other significant tragedies happening around the world.

“What about the 19 Yazidi girls who were burned alive by their ISIS captors because the girls refused to have sex with them? Where is the outrage over their deaths?” she wrote to education director Notten in a June 14 email obtained by LifeSiteNews.

“Should we not stand in solidarity with those who held fast to their morality and chose a horrific death instead of disgrace? What about the Syrian Christians who are being targeted? ISIS attacked 35 Christian villages in Syria in February 2105. Why are we not standing in solidarity with them – people forced to leave their homeland because they are hated for their faith.”

Runstedler said that instead of wearing purple shirts which accomplishes nothing, students should pray for peace.

“Ms. Notten, I would suggest that, as Catholics, our call is to pray for all victims of hate and violence around the world, regardless of color, religion, ‘orientation,’ or gender. Wearing a shirt will do nothing to help victims anywhere. As Catholics, perhaps the school board should be organizing real prayer vigils in which students really pray for peace in the world. Prayer is, after all, the greatest gift we can give the world,” she wrote.

The dress-up event was also pushed by individual Catholic schools within the board.

SAINTS: Headbands and bandanas are a modification to the uniform and cannot be worn. You will be asked to turn it in to the main office.

Joseph Sciambra, who left an active life of homosexuality for a Catholic life of chastity 16 years ago, criticized the Catholic school board for having an event that catered to the modern gay rights movement by using its language and symbols.

“First of all, I think it is wonderful and noble for any Catholic to pray for those who died so needlessly in the Orlando massacre, but a Catholic can do this without adopting the vocabulary or the symbols of the modern gay rights movement,” he told LifeSiteNews.

He took issue with Education Director Notten tweeting support for the LGBTQ movement by making use of a rainbow colored heart, saying that either she was “naive or she has an agenda.”

Sciambra said that it is a mistake to define people with same-sex attraction solely by terms such as gay, lesbian, or LGBTQ because doing so reduces them to be no more than the sum of their drives and attractions, instead of being person created in the image and likeness of God.

“As a Catholic educator, Loretta Notten should know better,” he said.