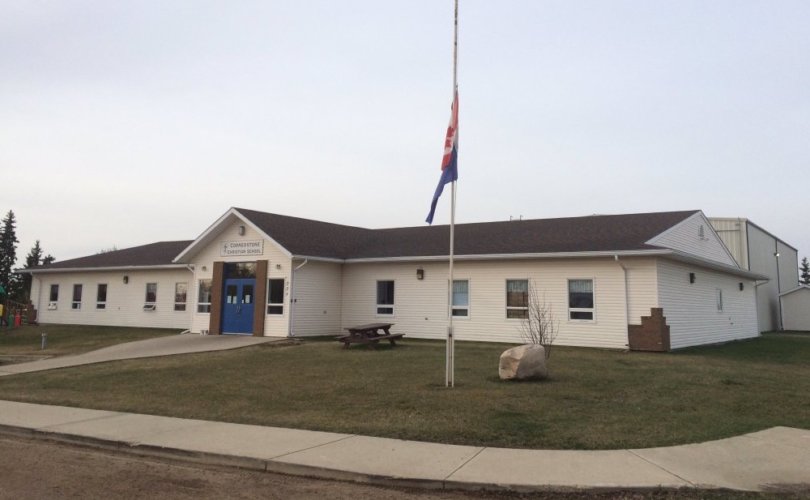 CAMROSE, Alberta, May 4, 2018 (LifeSiteNews) — A public school board has voted to close an associated Christian school that it previously censured for publishing Scriptural texts in the student handbook.

The Battle River School Division (BRSD) voted unanimously on April 26 to end its partnership with the Cornerstone Christian Academy of Camrose (CCA). The board wants to part ways with the school, located in Kingman, Alberta, at the end of the school year.

The CCA Society is seeking a court injunction against the school’s closure, and there will be a hearing on May 19. CCA owns the school building, but teachers are employees of BRSD, and much of the school equipment belongs to the board.

Relations between the school and the school board became strained last year when the board ordered the school not to publish certain texts from the Christian Scriptures. It also said that students could not read or study “any scripture that could be offensive to particular individuals” and which contravene Alberta’s human rights legislation.

After CCA agreed to remove the “offensive” Scriptural passages from the student-parent handbook, BRSD trustees demanded that they must be eradicated from anywhere in the school.

At the time, the Justice Centre for Constitutional Freedoms (JCCF), which is representing the school, said that the trustees’ attempt to ban Scripture was contrary to the agreement between the school board and the school.  There BRSD had pledged not to “attempt to change the essential nature of the CCA program.”

This year, the JCCF’s James Kitchen told the CBC that Alberta’s School Act permits Christian schools to exist as part of public school boards in Alberta.

The chairman of the school board, Kendall Severson, said that the biblical tiff had been resolved, and that the insurmountable issue was the inability of the BRSD and CCA to come to an agreement about their relationship.

“I guess it was the unwillingness to work together for a communications protocol on how we communicate with each other and dealing with issues that arise,” he told media.

“We can’t work together with an organization that’s got legal action against us, and not willing to come together and work on an agreement.”

But the chairman for the Cornerstone Christian Academy Society, Deanna Margel, indicated that the school board’s attempt to censor the Christian Scriptures was still at the heart of the matter.

She said that there was a misunderstanding in today’s culture of what faith really means.

“What is happening at the school is a good opportunity for people to discuss their different ideas and talk about how we deal with those things,” Margel said.

“Anybody familiar with the Christian Bible will recognize that there are many, many passages of Scripture that are offensive to even those of us who follow Christ.”

Margel told LSN last June that until BRSD took issue with CCA’s student-parent handbook, the two entities had had a good relationship.

“If you had asked me about our relationship with BRSD two months ago I would have told you that it's been quite positive,” she said.

“I've really appreciated being able to call and ask for advice or direction when working on various issues that our volunteer board has little experience in,” Margel continued.

The BRSD’s hard line against the school’s references to Christian Scripture came as a “very big surprise” and felt like a “betrayal of trust,” she told LSN.

“We pray that they will retract this statement and that we can re-engage in constructive dialogue with the goal of mutual understanding and support for one another,” Margel said.

“After all, we have the same goal–giving kids a great education in a safe and caring community.”

Hailing from about 100 families, 170 students attend CCA.  If their legal challenge fails, the CCA Society hopes to reopen the school  as a private academy.

Founded in 1989, Cornerstone ran as a private school with partial funding until 2009. That year it entered into an “alternative school agreement” with the Battle River School Division.