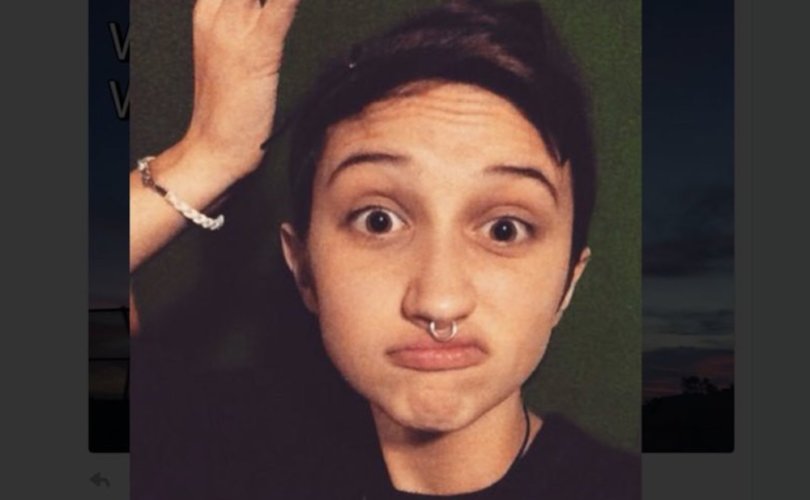 KENOSHA, Wisconsin, January 18, 2018 (LifeSiteNews) – The Kenosha Unified School District has caved to the transgender agenda, dropping its appeal to the U.S. Supreme Court and paying a $800,000 settlement in the case of a biologically female student who says she is a “boy.”

In July 2016, Wisconsin high schooler Ashley Whitaker sued her school. She said she suffered from depression and anxiety and that her life was miserable – not because of her gender dysphoria, but because George Nelson Tremper High School didn’t acknowledge her as a “boy” and allow her to use the boys’ bathroom.

“I think we have an excellent argument, but if you look at it in terms that you’ve got these escalating costs, you’ve got a good argument, but not an absolute argument,” he told Kenosha News. “The attorneys’ fees drive it.”

School leaders had offered “Ashton” a gender-neutral bathroom to use, but she still stopped drinking adequate water, began to faint, and suffered headaches over being addressed using female pronouns, initially being disallowed to run for Junior Prom King, and being made to room with the girls on an orchestra trip to Europe.

In September 2016, a federal court order Tremper High to let Ashley use the boys' bathroom. The school appealed.

A Seventh Circuit Court of Appeals panel upheld the lower court’s dictum in 2017.  The court dismissed the school’s appeal to male students’ privacy as based on “sheer conjecture and abstraction.”

The court decided that a female using male community toilets is no different than “an overly curious student of the same biological sex who decides to sneak glances at his or her classmates.”

The school appealed to the U.S. Supreme Court.

But, worn down and concerned with rising litigation costs, the school district dropped its appeal to the U.S. Supreme Court.  They agreed to pay $800,000 “for the harm Ash experienced as a student.”  The lion’s share of the money will go to lawyers.

Now a freshman at the University of Wisconsin-Madison, Tremper High agreed to let Ashley use the men’s room if she ever visits.

Citizens United, the Conservative Legal Defense and Education Fund, and the U.S. Justice Foundation filed a friend-of-the-court brief to the nation’s highest court in October 2017. The brief outlined what was at stake in the case.

The brief made arguments to protect the privacy rights of all the male students at the school. The brief also raised “modesty concerns,” outlining how not just boys' toilets, but locker rooms and showers would be shared with the biological woman if the case remained in Ashley's favor.

“No effort was made to consider the views of anyone else, much less the parents of the school children,” the brief charged.

More to the point, the brief emphasized that by going along and enabling Ashley’s gender dysphoria, “harm (was) being done to Ash Whitaker by her mother, her counselors, and her physician.”

“If the child is treated with hormone therapy while still a minor…incalculable, life-long injury can be incurred without the individual’s true informed consent.”

Responding to plaintiff attorneys’ claim that if Ashley might kill herself if she loses the case, the brief countered that transgenders “are not suicidal because they are discriminated against, but because they suffer from a mental illness.”

“No mentally healthy person would kill himself if not permitted to use the restroom he prefers,” the brief states.  “And yet…mental health ‘experts’ tell us that we must all play along with mass delusion of transgenderism lest we harm the sensitivities of transvestites and they, in turn, harm themselves.”

A similar case in Virginia was cited in the brief, where renowned experts in both pediatrics and mental health testified that affirming Ashley’s gender delusion is not going to help her.  The example Drs. Paul R. McHugh, Paul Hurz, and Lawrence S. Mayer used was the case of an anorexic.

“An anorexic child is not encouraged to lose weight. She is not treated with liposuction. Instead, she is encouraged to align her belief with reality – i.e., to see herself as she really is,” the cited experts wrote.  “Indeed, this approach is not just a good guide to sound medical practice.  It is common sense.”

The brief also argued that the case “is a part of the broader transgender movement, the goal of which is to eliminate society’s delineation of persons by sex.”

“If sex is defined as whatever any given person wants it to be at a given time, there can be no distinctions made on the basis of sex,” the brief warned.  “If the word ‘sex’ is judicially redefined from a biological constant to include ‘gender,’ a fluid concept that is self-defined and self-declared, the result will be sexual anarchy.”

The brief adds that “the decision of the Seventh Circuit Court of Appeals constitutes another lawless act of judicial will being superimposed on an act of Congress.”