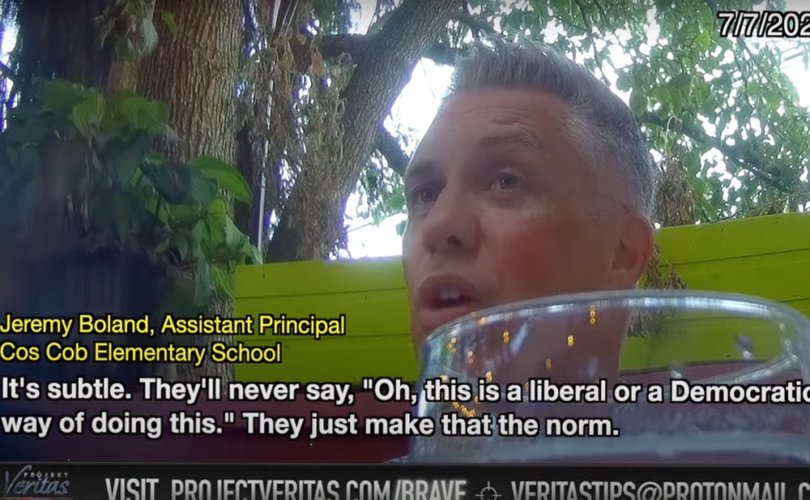 COS COB, Connecticut (LifeSiteNews) — An administrator of a Connecticut elementary school was caught in an undercover video by Project Veritas saying he subtly fosters liberal values in children and wards off conservatives by refusing to hire Catholics and older applicants.

The school district informed LifeSiteNews that the official has since been placed on administrative leave, and the district does “not support any opinions that promote discriminatory hiring practices.”

Cos Cob Elementary School assistant principal Jeremy Boland made the controversial comments during a series of conversations with an undercover Project Veritas reporter.

In the now-viral video, Boland said he and his subordinates circumvent parental control by inculcating liberal values in the children while subtly avoiding any direct mention of politics.

According to Boland, he makes an “impact” on the school by hiring teachers who hold liberal worldviews.

“So it’s subtle. They [teachers I hire] will never say, ‘Oh, this is [a] liberal or a Democratic way of doing this.’ They’ll just make that the norm. And this is how we handle things, it’s subtle,” he said.

Boland told the reporter that the school teaches children “how to think,” explaining that “It doesn’t matter what they think about. If they think about it in a logical, progressive way, that becomes their habit.”

Asked whether the school “gear[s]” children “to think in a more liberal way,” he responded in the affirmative.

“Believe it or not, the open-minded, more progressive teachers are actually more savvy about delivering a Democratic message without really ever having to mention politics,” he said.

“And that’s how you get away with it?” the journalist asked.

“That’s how you get away with it,” Boland said.

During the video, Boland also said he might include a new question regarding “transgender” children in upcoming teacher interviews so he can weed out religious people and conservatives who believe that children cannot decide to identify as a different gender.

The assistant principal told the undercover reporter he has refused to hire Catholics and people over age 30 because of concerns they would hold conservative values.

“If someone is raised hardcore Catholic, it’s like, they’re brainwashed — you can never change their mindset,” he said, going on to slam an unnamed conservative teacher on staff who he said is “stuck in her ways” and he’ll “never be able to fire.”

“So I make an impact with the next teacher I hire,” he explained, touting his “instinct for hiring.”

“For one position, I think we had 30 applicants. So out of all those applicants, I don’t think I interviewed anybody over the [age] of 30,” Boland said. “The older you get, the more set in your ways — the more conservative you get.”

In its report, Project Veritas provided a quotation from Section 46A-60B1 of Connecticut Law that prohibits discriminatory hiring practices.

— Article continues below Petition —
PETITION: Fight back against Minneapolis teachers union's woke racism!
Show Petition Text
3725 have signed the petition.
Let's get to 4000!
Thank you for signing this petition!
Add your signature:
Show Petition Text

According to the law, no employer may refuse to hire someone “because of the individual’s race, color, religious creed, age, sex, gender identity or expression,” and more.

Greenwich Public Schools (GPS), of which Cos Cob Elementary School is a part, specifically states that its schools “do not discriminate on the basis of race, color, national origin, sex, sexual orientation, religion, disability, or age in its programs and activities.”

On Wednesday, a GPS spokesperson shared with LifeSiteNews the contents of two emails sent to families and staff members advising them of the school district’s response to the video.

In the first email, sent August 31, GPS superintendent of schools Dr. Toni Jones said ​​the district had been ”made aware of” the Project Veritas video the previous night.

“We intend to do a full investigation and until that time, we will not make any public statements,” she wrote.

In the next email, Jones informed recipients that Boland has been “placed on administrative leave.”

“Once again, we do not support any opinions that promote discriminatory hiring practices based on race, religion, gender, or age in any way, and we want to remind our entire community that our curriculum policies and procedures are strictly enforced by our Board,” she said.