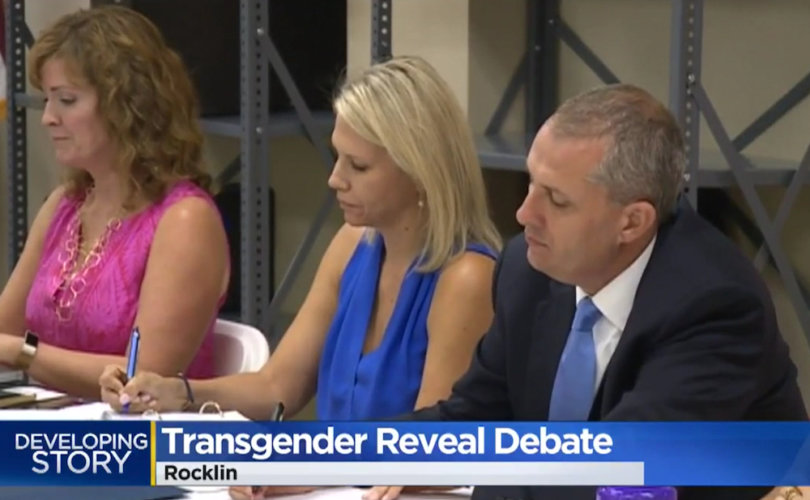 ROCKLIN, California, August 24, 2017 (LifeSiteNews) — Tensions continue to rise in a Sacramento suburb over a boy who “transitioned” to a girl at Rocklin Academy Gateway kindergarten last June during a lesson that some parents say left their five-year-olds traumatized.

Angry parents flooded the Rocklin Academy School Board meeting Monday to protest that they weren’t forewarned the boy was transitioning to a girl or that the kindergarten class would be taught about transgenderism, reported CBS.

Parents were notified only a week later and told only “that two books had been read, not that there was a transgender student in the class,” according to a parent statement provided to LifeSiteNews by Greg Burt of the California Family Council.

But kindergarten teacher Kaelin Swaney defended her actions at the board meeting.

“I’m so proud of my students. It was never my intent to harm any students but to help them through a difficult situation,” she said, according to CBS.

But the teacher has refused to disclose to parents what happened during the lesson, according to the parent’s statement. Instead, she told the parent to “ask our student.”

Board staff “are refusing and they refused even afterwards to answer parents’ questions and have referred the parents to their children who were in their class, to the five-year-olds, as to what happened,” she told LifeSiteNews.

Because of state regulations governing open meetings, the board couldn’t legally address the issue Monday night because it wasn’t on the agenda, England told LifeSiteNews. The teacher and parents spoke during the general comments section.

Board accusing parents of inaccuracies

The board is now saying that parents’ accounts of what happened on the second-to-last day before summer break are inaccurate.

In a Tuesday email to parents, Rocklin Academy superintendent Robin Stout disputes the “timeline of events” but adds: “Because of our obligation to protect student confidentiality and safety, we are not at liberty to correct every detail.”

Stout states no “transition ceremony took place” but the “gender transition of the student had occurred before the day the book was read.”

LifeSiteNews contacted Stout and Rocklin Gateway School but did not hear back.

According to the parent’s statement, one-third of the class (seven students) said the teacher read one book in the beginning of the day and another at the end. (The two books pro-transgender books were “I am Jazz” and “The Red Crayon” and target four to eight year olds.) Somewhere in between, “the child changed his clothes from boy clothes to girl clothes.”

“All of the students knew that the child now had a girl brain in a boy body and that he had a new name that the students were to call him,” the parent stated. “Because of this we are assuming that there was some sort of presentation.”

At the next day’s graduation ceremony, the teacher introduced the student by “his girl name” and “all of the students knew he was now a girl and that he had to be called by his new girl name,” the parent stated.

“The school did not refute this happened until a week ago,” she wrote. “They are now disputing the sequence of events but not that the events did not take place.”

That parent is also getting hate mail among the responses to a petition she has launched, Burt said. “People are afraid to talk about this issue.”

Parents fear not only the backlash but lawsuits, noted England. “I’m getting a letter from a legal group that lets them know that no, you can’t get sued for telling the truth.”

Schools also “are scared to death” they’ll be sued or charged with discrimination, Burt said.

He blames California’s lawmakers for this.

Indeed, Stout has stated the board didn’t have to tell parents in advance because gender issues don’t fall under sex education and aren’t subject to the state’s opt-out and parental consent laws.

A July 31 school board presentation stated a child has a “right” to self-identity and anyone who intentionally does not use a student’s preferred pronouns could be guilty of “gender identity harassment.”

California’s senate is now poised to pass SB-179, which will create a “third” gender for birth certificates and driver’s licences, Burt said.

“This particular bill allows a parent to change the gender of their children, no questions asked, no doctor’s note required,”  he told LifeSiteNews.

“Plus there’s no age limit, so a parent can change the sex on their two-year-old’s birth certificate by simply filling out a form if they wanted.”

Added Burt: “So what’s a school do if a boy comes in and it says legally on his birth certificate that he’s a girl and he’s obviously not a girl?”

The California senate is also considering Bill 219, which will jail people for up to a year for not using the pronouns of choice for patients in long-term care facilities. The bill mandates such facilities place men claiming to be women in rooms with women.

Parents and faith leaders must fight back

The kindergarten blowup in Rocklin is the inevitable result of such legislation, Burt says.

The California Family Council is “pleading with parents and religious leaders speak out publicly regarding their opposition to laws that promote transgenderism and to call and personally meet with their legislators,” he told LifeSiteNews.

“Way too many people who disapprove of these government policies have been silent about their opposition. And policy makers have interpreted this silence as approval of the direction they have been going. That has to stop,” added Burt.

“This isn’t going away,” England told LifeSiteNews. “The school is digging in. … It’s erupting.”