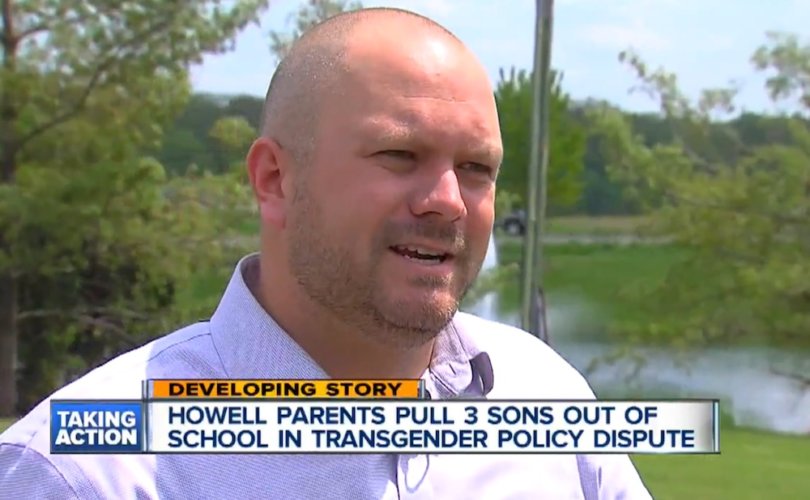 HOWELL, Michigan, June 6, 2016 (LifeSiteNews) — A Michigan school district has stopped the practice of allowing members of one biological sex to use the restrooms of the opposite sex after parents pulled their two sons out of elementary school over the issue.

Last week, Matt Stewart's nine-year-old son told him, “There was a girl in the boys’ bathroom” with him and other male elementary kids.  When Stewart called the school, the principal told him the Obama administration's federal guidance on transgender students forced them to allow transgender students in the bathrooms, locker rooms, and showers of their chosen gender, and not their biological sex. Violating the policy means losing federal funding.

Stewart talked it over with his wife, and they decided to take their sons out of Southwest Elementary School in Howell, Michigan.

Now, after publicly complaining that parents should have been consulted, Stewart says, “over the last few days they have actually changed their positions.”

Howell Public Schools Superintendent Eric McGregor issued a statement saying, “At this time, we do not currently have any students using a restroom other than that designated for their biological gender, or requesting to do so.”

“We are pausing on the federal guidance issued to all school districts across the nation…while we work to…gather feedback on this matter,” Superintendent McGregor wrote.

Stewart has since sent his sons back to school.

“Parents should join hands and respond by telling their local schools that if they surrender to these demands, they will take their children out of that local school and find another alternative to educate them,” Bauer said.

Bauer, who is the president of American Values and chairman of the Campaign for Working Families, said that parents who follow this family’s lead “will accomplish two things: reminding local school officials they work for you, and, teaching your children that fighting back against big government is as old as the American Revolution.”

In Howell, school administrators appear to have gotten the message.

Stewart concluded that school decisions as intimate as these “should involve the parents and should involve our community.  These are our schools.”