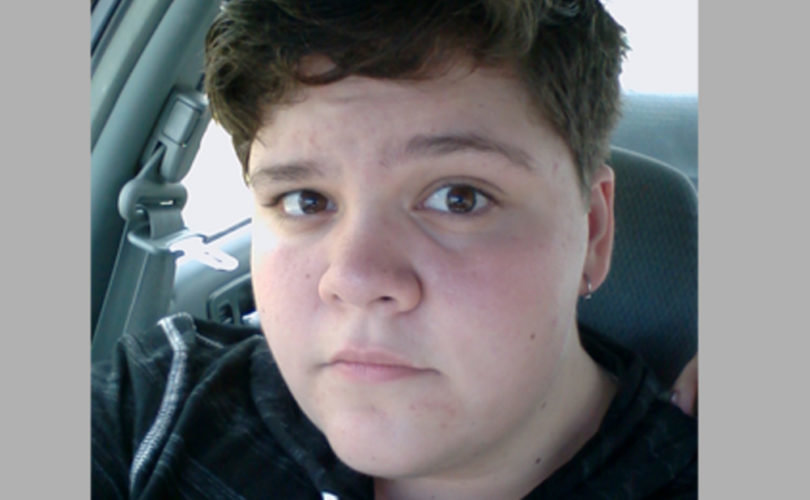 WASHINGTON, D.C., November 1, 2016 (LifeSiteNews) — The U.S. Supreme Court announced that it will take on the issue of transgender bathrooms being forced upon the nation's schoolchildren.

The country's highest court will hear an appeal next year from the Gloucester County School Board in Virginia on Caitlyn Hope Grimm's lawsuit to use the boys’ showers, toilets, and locker rooms at school.

“This is the first time that the Court will be addressing the question of whether laws protecting against sex discrimination in education are applicable to 'gender identity,'” Liberty Counsel noted.

Caitlyn, a 17-year-old suffering from gender dysphoria, began to self-identify as a boy in 2014. She has not undergone sex “change” surgery, but she has legally changed her name to “Gavin” and begun taking hormones to give her a deeper voice.

When Caitlyn began using the boys' restroom at school, some parents voiced their concern. The school board decided to build private, single-stall bathrooms for Caitlyn and anyone else wishing absolute privacy, and to keep school common bathrooms gender separate.

The American Civil Liberties Union (ACLU) brought a lawsuit on Caitlyn's behalf, fighting for her right to use all the school's intimate facilities for males.

On May 31, the Fourth Circuit Court of Appeals upheld its panel's initial ruling in April allowing Caitlyn to use the men's room. Since President Obama earlier this year publicly announced that his interpretation of Title IX anti-discrimination law includes transgender self-identity – he weighed in specifically on the Caitlyn Grimm case – the panel deferred to the Obama administration.

“It is ridiculous that the Supreme Court has to address whether a confused girl … should be treated as a boy,” Liberty Counsel Chairman Mat Staver said in a press release. “The school district’s responsibility is to protect the safety of students from harmful situations.”

Staver reasoned that transgenderism needs healing, not enabling. “The federal law does not allow people to change their gender by fantasizing they are something other than reality,” he said.

The Liberty Counsel founder said the case is clear. “How the Supreme Court should rule is simple and obvious,” Staver explained. “The federal law does not allow persons to subjectively think, and therefore be treated, as the opposite of their biological sex.”

However, with the political and societal tide turning against traditional morality, Staver says that with the justices now on the nation's highest court he fears a precedent-setting ruling against gender sanity. “I have very little confidence in the Supreme Court to follow the plain rule of law,” he said. “Who knows what a majority of the current justices will do, because they often put their own personal ideology over the law.”

It is expected that the Supreme Court ruling next year will have direct impact on community bathroom laws, such as North Carolina's HB2, which keeps public bathrooms gender separate.

There are currently only eight justices on the Supreme Court, and with Republicans disallowing hearings on Obama’s nominees, either pro-transgender Hillary Clinton or pro-life Donald Trump will nominate someone to fill the vacancy.

There are also three justices currently considering retirement. The Daily Signal concludes, “With three of the surviving Supreme Court justices in or near their 80s, successors named by the next president could shift the ideological makeup of the nation’s highest court.”