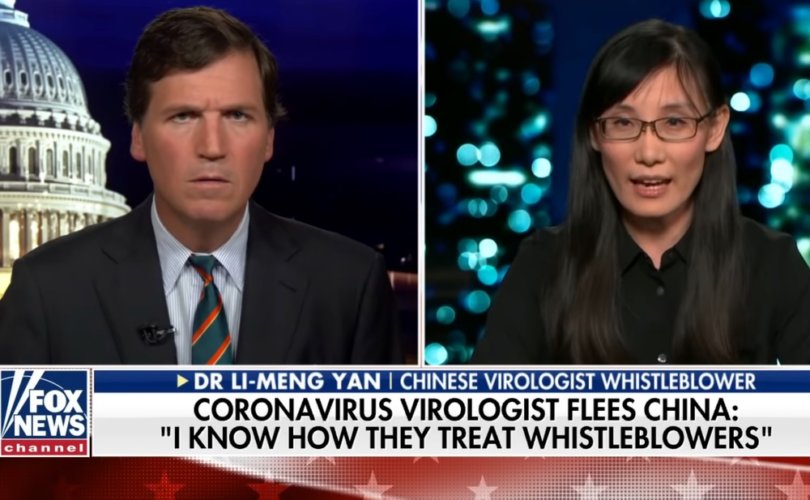 WASHINGTON, D.C., September 16, 2020 (LifeSiteNews) — A Chinese scientist in hiding in the United States told Tucker Carlson that COVID-19 was created in a lab and that China’s Communist government released the “Frankenstein” virus “intentionally” to “make such harm.”

Dr. Li-Meng Yan also alleged in her bombshell interview with the Fox News host that the international scientific community is aware that the novel SARS-CoV-2 virus is man-made, but doesn’t want this known.

A medical doctor and virologist, Yan said that the Chinese Communist Party (CCP) will take steps to see that those who tell the truth, as she is doing, will be “suppressed” or made “to disappear.”

Yan’s Twitter account, which had 60,000 followers, was suspended after only two days and three tweets, and just 48 hours after she and two colleagues released a report stating the SARS-CoV-2 virus was man-made.

Yan, who fled Hong Kong for the United States in April, was among the first scientists in the world to study the novel coronavirus.

“This is created in the lab, this is from, technically owned by China military and also it is spread to the world to make such damage,” she told Carlson.

“Do you believe the Chinese government released this intentionally, on purpose?” Carlson asked.

The 36-year-old scientist said more information will be released soon, but that she based her allegations on what she discovered as a virologist at the World Health Organization reference lab at the University of Hong Kong.

“I work[ed] in the WHO reference lab, which is the top coronavirus lab in the world, in the University of Hong Kong. And the thing is I get deeply into such investigation in secret from the early beginning of this outbreak. I had my intelligence because I also get my own unit network in China, involved [in] the hospital … also I work with the top corona[virus] virologists in the world,” she said, as reported by Fox News.

Yan earlier told a visibly startled Carlson that she has “solid scientific evidence” that the virus “actually is not from nature, it is a man-made virus created in the lab.”

The “Chinese military discovered and owned the very unique bat coronavirus which cannot affect people, but after the modification becomes the very harmful virus as now,” she said.

“I have evidence to show why they can do it, what they have done, how did they do it.”

A virus genome is “like our fingerprint,” and the unusual features of the SARS-CoV-2 genome show clearly that it comes “from their own special bat coronavirus and it then targets humans,” she explained.

She described the SARS-CoV-2 genome as a “Frankenstein,” and likened it to “a cow [that] has deer’s head, has rabbit’s ears, and also has monkey’s hands, so they can never get it from nature.”

“What you’re alleging is shocking even more than I anticipated when we invited you on,” Carlson said.

If this virus genome is “in the possession of many researchers around the world, why is nobody saying this if it is true?” he asked.

“It’s because of the big suppression coming from the Chinese Communist Party government and their friends in the scientific world,” Dr. Yan said.

“The scientific world also keeps silent, works together with Chinese Communist Party, they don’t want people to know this truth,” she said.

“That’s also why I get suspended, I get suppression, I am the target that [the] Chinese Communist Party wants to be disappeared,” Yan added.

“Why would the Chinese government intentionally create a virus like this?” Carlson said.

“We cannot always understand their evil thinking. You have to come to ask them.”

Evidence supporting her allegation includes Beijing’s attempt to cover up the spread of the virus, “making the fabricated virus,” its censorship of information about the virus, and “also clearly to try to make people like me who talk about the truth get disappeared,” Yan said.

“Everyone needs to know the truth,” she added.

Yan told China expert and LifeSite contributor Steven Mosher in an earlier interview that the virus escaping the “high containment” Wuhan lab was “not an accident. No one in the lab got sick or died. There are always two people in the lab. No live virus would be able to escape.”

However, she said she doesn’t know if the escape was caused by a disgruntled employee or whether a more sinister plot involving the Chinese government was afoot, he wrote.

Regarding her statement to Carlson that the virus was released “intentionally,” Yan “may have been referring to the well-established fact that the CCP intentionally spread the China Virus throughout the world by allowing flights to continue to leave Wuhan for weeks after they knew they had an epidemic brewing there. That was clearly an intentional release,” Mosher told LifeSiteNews.

“Whether or not the CCP intentionally released it from the lab itself on its own population is a point that she is agnostic about,” he said.

Since Yan began speaking out a month ago, she has been fired from the University of Hong Kong, which dismissed her findings, her husband has distanced himself from her, and her parents have publicly called her a “traitor,” she told Mosher.

“I do this because I am a scientist and I know the truth and I want to tell it to the world,” Yan said then.

“But if they find me, they will kill me.”

Meanwhile, a clip of Yan’s interview on Tucker Carlson Tonight Facebook has been covered with a notice labeling it “False Information.”

“They don’t want you sharing the video, and they are limiting the number of people who can view it. This is censorship, and we will be addressing it on our show tonight at 8pm ET on Fox News.”