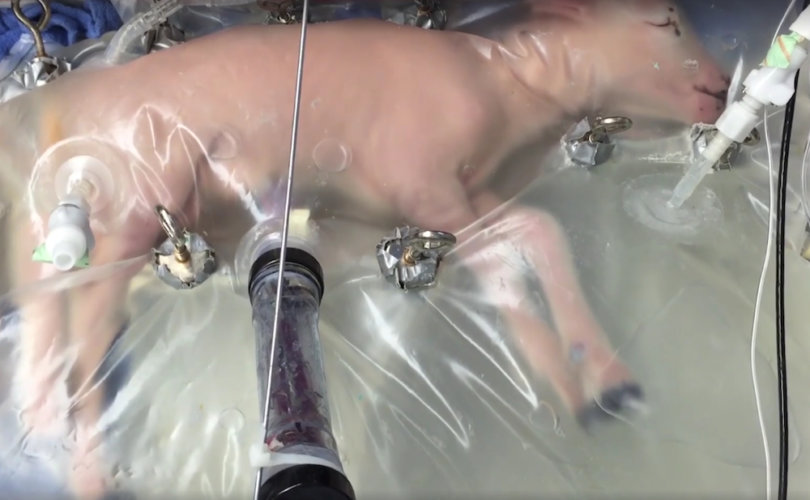 April 28, 2017 (LifeSiteNews) – Scientists have developed an artificial womb that can sustain premature lambs, and such technology could be used to save prematurely born babies.

The artificial womb that successfully allowed lambs to continue developing their brains and other organs is essentially a bag of fluid – conditions much closer to an actual womb than an incubator.

This technology, although it's not yet ready to help human babies, could in the future “be a very great boon,” Dr. David Prentice, vice president and research director of the Charlotte Lozier Institute, told LifeSiteNews.

This technology could also allow babies to be considered viable at younger ages, which could affect abortion laws.

“It’s a tough battle for these little ones that are born so early,” said Prentice. “The innovations that this group has come up with are exciting for the potential of being able to take some of these very pre-term babies and give them a little more time to develop their lungs, primarily.”

Prentice explained that one of the biggest challenges prematurely born babies face is the development of their lungs. Their lungs are supposed to be “practicing breathing” with amniotic fluid, so it's difficult for a baby placed in an incubator to be breathing air, even with the assistance of a machine.

“Their little systems are so fragile at that point that our usual mechanisms aren’t really calibrated for such a fragile life,” he said. So an artificial, fluid-filled womb “has great implications to just give these little ones a little extra time. … They need that extra sort of cushion of the [amniotic] fluid inside the lungs so that the lungs have a chance to continue to mature.”

The fluid-filled bags in which the lambs were incubated are “very innovative” because there's no pump that is circulating the artificial amniotic fluid, said Prentice. “What this is driven by is actually the little fetal heart. It pumps and moves this tiny volume of fluid back and forth and [the baby] gets oxygen then through the umbilical cord just as [she] normally would, but it’s all driven by the fetal system rather than some mechanical pump trying to pump it and force it.”

And rather than have to insert a large needle into the baby's umbilical cord to provide her with nutrients, this technology allows babies to receive nutrients through the umbilical cord more delicately, which reduces the risk of bleeding.

Prentice stressed that this new technology is “no substitute” for a mother's actual womb. “Especially early in development – just on the biology aspect of it – about a week after conception you have formed a layer of outside cells that will be your side of the placenta but that allow you to attach to the womb and implant and make that connection with mom so that you can get nutrients.”

“There’s a lot of interaction that we don’t even understand yet at the cellular and molecular level just to be able to make that connection,” he said. “You need real cells and real tissue to make that part work.”

The fact that this technology isn't able to sustain babies during the earliest weeks or even months of pregnancy means it's not likely to immediately be sought after as a total replacement for pregnancy. However, there are other potential bioethical issues.

“What about people that go, 'well, hey, then I can just go ahead and abort my baby whenever I want because we’ll just throw him in an artificial womb?'” asked Prentice. “Or maybe, 'I don’t even have to gestate at all. I can have what amounts to the ultimate surrogate and just from the very beginning we’ll do IVF, we’ll have this embryo in a dish in the lab, and then we’ll put it into an artificial womb.'”

Thankfully, “we’re not anywhere close to that,” he said. Embryos grown in labs can't last much longer than a week without being placed in a womb.

“The science is simply not there” to allow an embryo to grow for months without the assistance of her mother's (or surrogate mother's) body.

“But it still raises the question of what if someone wanted to try and do that” and succeeded, noted Prentice.

“That relationship between mom and baby is so much more than just biology,” he said. “There are definitely parts of that relationship that scientifically we do not know.”

There's a lot to consider about growing a human baby via surrogacy “artificially, all the way,” he said. “Maybe science could advance to that point that you could from day one to whatever we’ll call ‘birth’ now, when we’re taking you out of your plastic bag and artificial womb,” be without one's biological mother's body.

“You’re missing out on something,” said Prentice. “There’s still going to be something missing there in terms of that emotional bonding and relationship with mom [and] probably some biology that we simply do not grasp” yet.

“It starts to conjure up images” of science fiction, he said, like The Matrix or Brave New World.

In Brave New World, “they grew everybody in these vats essentially – artificial wombs,” explained Prentice. And these humans were “manipulated … so that some were smarter” and others were designed to be laborers.

For now, though, Prentice sees the newly-designed artificial womb as a “very exciting development” with the potential to save the lives of babies whose lungs just need a few more weeks in a womb-like environment.