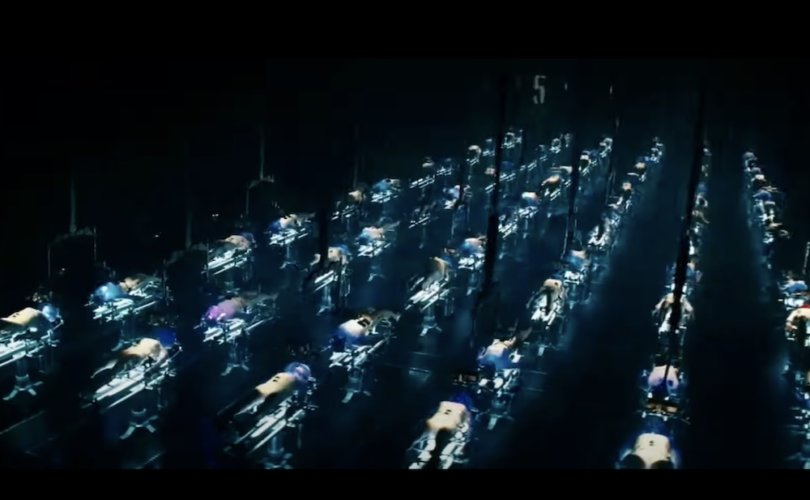 Clones grown for spare parts in the 2005 film 'The Island.'video screenshot

(LifeSiteNews) – A development in stem cell research is being hailed as a breakthrough for those suffering infertility, miscarriage, or requiring organ transplants but also portends a chilling future straight out of dystopian science fiction.

CNN reported that a team of researchers has just published a paper in the peer-reviewed journal Nature announcing that, after 10 years of work, they have successfully used stem cells to create a mouse embryo possessing functioning organs without the use of sperm or egg cells.

“Our mouse embryo model not only develops a brain, but also a beating heart, all the components that go on to make up the body,” says lead study author Magdalena Zernicka-Goetz, professor of mammalian development and stem cell biology at the University of Cambridge. “It’s just unbelievable that we’ve got this far. This has been the dream of our community for years, and a major focus of our work for a decade, and finally we’ve done it.”

Further, they hope to progress from mouse embryos to synthetic human embryos (which CNN euphemistically describes as “creating models of natural human pregnancies”) in order to better observe the gestational process, which they say could help scientists learn how to prevent miscarriages.

The report acknowledges that this step would require addressing “ethical and legal consideration,” as well as potentially “decades” of additional work to account for the vast chasm between the complexity of mouse and human embryos. But if those hurdles are cleared, the process “could help build synthetic organs for people who need transplants.”

Largely overlooked in the article is the question of what happens to the artificially-created human from whom those organs would be taken. The hope of Zernicka-Goetz’s team is the very scenario presented as a cautionary tale in various fictional works over the years, such as 1979’s The Clonus Horror and 2005’s The Island. Both films depicted worlds in which wealthy or powerful members of society commission clones of themselves in the event they require replacement organs, in which case their clones are murdered.

“But in the longer term, as scientists move from mouse synthetic embryos to a human embryo model, it also could help build synthetic organs for people who need transplants, Zernicka-Goetz added.”

@CNN your reporting here is disgusting. Manufacturing babies to tear them apart and harvest their organs to adults can live longer — CNN writes a glowing piece.

Stem cells have been a massive boon to medical research, offering seemingly endless potential to treat human ailments and injuries. But they have also carried grave ethical dangers, from the destruction of human embryos to obtain them to the sale of the bodies of aborted babies.

Embryo-destructive research was originally rationalized on the grounds that embryonic stem cells are pluripotent, meaning they have the ability to become any type of tissue. But investment in this subset of the field has steadily declined over the years as science has learned how to induce pluripotency in adult stem cells from other sources, such as bone marrow and umbilical cord blood.

“Perhaps there is some way to use stem cells to create organs without killing human beings created for that purpose,” LifeSite’s Jonathon Van Maren said last month of similar work being conducted in Israel. “But at the moment, it very much sounds as if a biotech firm is planning to create individual human beings at the earliest stages of development for the purpose of utilizing them for spare parts. That is not ethical ground. That is Frankenstein territory.”