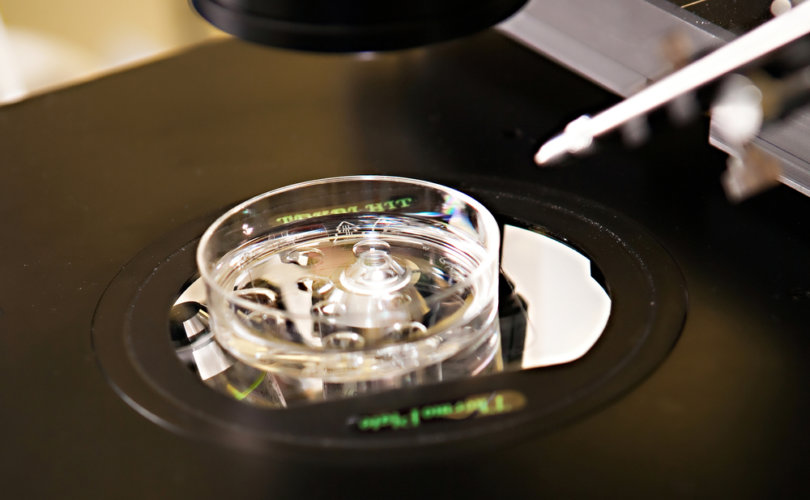 MEXICO CITY, January 20, 2019 (LifeSiteNews) — Scientists paid dozens of Mexican women to be hyperstimulated with hormones and artificially inseminated before their babies were aborted just a few days after conception as part of a controversial scientific study.

At the Punta Mita Hospital near Puerto Vallarta, a resort town on Mexico’s Pacific coast, as many as 80 women were subjected to injections of dangerous levels of hormones to induce ovulation and thus release eggs from their ovaries. The women were then artificially inseminated, according to an NPR report, while the resulting embryonic babies were “flushed out of” the women’s bodies and used for scientific research.

According to the report, the researchers found that the embryonic babies conceived this way were as healthy, or even “healthier,”  “genetically” as those conceived through the standard in vitro fertilization (IVF) technique, which involves removing eggs from women with needles and then fertilizing them with sperm under laboratory conditions.

When tests indicated that not all of the babies had been successfully “flushed out,” the women then underwent surgical or chemical abortions. However, some of the surviving babies were transplanted into the wombs of other women, and others were frozen.

Principal researcher Santiago Munné told NPR that the study shows for the “first time that human embryos conceived naturally have been analyzed genetically to see if they are normal or not.” He told NPR that the main goal of the research was to prevent the transmission of congenital conditions such as certain blood disorders or cystic fibrosis.

Each of the mothers was paid $1,400 for the study, which is more than twice the average wage for two months’ work in the state of Nayarit, where the study took place.

The study was published in the journal Human Reproduction.

Munné said the eugenic method would allow mothers to avoid transmitting unwanted genetic traits or diseases to their children, thus choosing the children they want.

Munné is the COO of Overture, a Madrid-based company that offers the freezing of fetuses, assisted reproduction, and genetic testing. Among the investors in the venture are private-equity bank Allen & Company and YouTube CEO Susan Wojcicki.

Author and ethicist Dr. Jozef Zalot of the National Catholic Bioethics Center told LifeSiteNews that there are a number of serious violations of basic ethics evidenced in the study. In addition to the fact that conception took place in a laboratory, rather than naturally and in a marriage, he said the resulting embryonic babies are “seen as objects.”

Zalot warned that the method used by Munné is another form of pre-implantation diagnosis, in which artificial insemination is used to conceive a number of embryonic babies from which are chosen those with the required genetic composition. “This is the manipulation of human life,” he said, “in which you are choosing which children to implant and those you don’t.”

“They are not treated as subjects of themselves and are obviously objects. They are being exploited for another’s good. It’s utilitarianism gone rampant,” Zalot said.

Among his other objections was that the method can be offered to lesbians who wish to have children. “All of this revolves around the quote-unquote parents’ right to have children,” Zalot said, adding, “It never focuses on the rights of children. The Church teaches that every child has the right to be conceived, gestated, and born of, and raised by his biological mother and father. This is another way that we as a society have completely abandoned what’s good for children and what’s in their best interests.”

Dr. David Prentice of the Charlotte Lozier Institute also denounced what he said were the questionable ethics in the study. In an interview with LifeSiteNews, Prentice said hormonal overstimulation can have serious side effects, including loss of limbs and even death for women subjected to them. While Munne said his methods were approved by the state government of Nayarit and the Western Institutional Review Board in the United States, Prentice said that conducting the study would not have been allowed in America.

Dr. Prentice said there was little of scientific value in the study and concluded that it merely reaffirmed the common understanding that babies conceived in their mothers are healthier than those conceived in lab conditions. He said there are “a host of questionable ethics” problems associated with the study, which even some of the scientific reviewers noted in comments. “You are basically using these women as the sources of raw materials, and then using them as a natural incubator to grow the embryos,” he said.

The hormonal hyperstimulation used in the study, said Dr. Prentice, results in the release of 20 or more human eggs at one time. The hormones themselves can be dangerous for the mothers, he said, while adding that some studies have shown that as many as 20 percent wind up in the hospital as a result. As for the embryonic babies, Dr. Prentice said more than half were subjected to abortions, given that the women in the study had no apparent intention of bringing the babies to term.

“The embryos themselves are the experiment,” Dr. Prentice said, adding that the women are used as natural incubators for babies that are then subjected to genetic analysis before they are implanted in mothers.

Munné claimed that the women in the study were informed of the risks. And despite the researchers’ assertions that the study was ethical, Dr. Prentice said it merely satisfied their curiosity and “set up an embryo market” for other researchers, or women seeking embryos for implantation. Studies like these, he said, can lead to justifying the use of human beings as “just another experimental resource.” Dr. Prentice is a professor of molecular genetics at The Catholic University of America and an adviser to the Midwest Stem Cell Therapy Center.

According to NPR, even several non-Catholic bioethicists and experts were disturbed by breaches of ethics made evident in the study. For example. Dr. Laurie Zoloth, a University of Chicago bioethicist, told NPR that the scientists used “a woman's body as a petri dish.” Saying the study is “profoundly disturbing,” Zoloth said it is “unethical.”

According to NPR, C.B. Lambalk, the editor-in-chief of Human Reproduction, which published the study, said, “Yes, it is quite a series of things that do raise your eyebrows.”