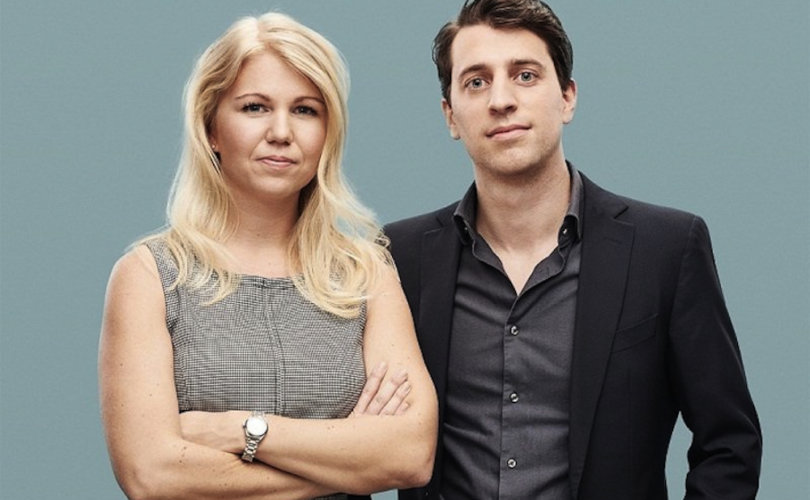 Drs. Elina Berglund and Raoul Scherwitzl report that their Natural Cycles application can “detect and predict ovulation with precision comparable to that of the contraceptive pill.”

However, it is clear from their literature that the developers intend it to be a contraceptive. “The end goal should be the developing world,” where “population is growing exponentially.”

Unlike many other methods of natural family planning, Natural Cycles is not a response to the Catholic Church’s teaching against artificial contraception. Instead, it is a reaction to a growing distaste felt by single but sexually active women at disrupting their natural fertility cycle with hormone-based pills.

Natural family planning advocate Sue Fryer says the main reason women stop taking birth control is that “the pill makes them sick. It suppresses a normal function. It takes away their libido. It is a number one carcinogen.* And it works partially as an abortifacient. When some women read the fine print and discover that, they just feel horrible about it.”

The Catholic Church teaches that all methods of artificial contraception are immoral. However, any method of family planning based on abstinence during fertile periods is acceptable if the couple’s intent is moral. As the papal encyclical Humanae Vitae puts it, NFP is licit as long as “there are well-grounded reasons for spacing births, arising from the physical or psychological condition of husband or wife, or from external circumstances.”

It is immoral, for example, to practice natural family planning to free the couple from the responsibility of raising children. This “suppresses the procreative meaning of marriage,” said Sister Renee Mirkes of the Natural Procreative Ethics Center, a division of the Pope Paul VI Institute for the Study of Human Reproduction. “It destroys the whole meaning of love.”

The Pope Paul VI Institute promotes “the Creighton Model” of natural family planning. This is based on the Billings Ovulation Method (BOM) of monitoring the consistency of a woman’s cervical mucus. Its advantages are its reliability and the fact it leaves a woman’s natural hormonal cycle alone. Another advantage, says the institute, is that it requires the cooperation of the husband.

The institute has marketed the FertilityCare app to help couples. Like many natural family planning groups, it advises people to take instruction from current users.

Fryer told LifeSiteNews that mucal secretions provide a more reliable basis for identifying fertile days than bodily temperature, which can be affected by stress.

Mucal secretions are the body’s way of protecting sperm and transporting it to the egg. Whereas other methods predict future fertile and infertile periods, said Sister Mirkes, “the ovulation method tells you on the day whether you are fertile or infertile.”

Fryer belongs to the World Organization Ovulation Method Billings (WOOMB), which has instructors in more than 122 countries working in many languages. With the additional guidelines these instructors provide, Fryer says, the Billings Method has a failure rate of less than 1 percent a year.

The John Paul VI Institute’s Creighton Model boasts a theoretical success rate of better than 99 percent and a “user” rate (when it is applied by real couples) of 94 percent.

Natural Cycles, which already has “150,000 users in 161 countries,” claims a 99 percent success rate, according to the Huffington Post, but this could be its theoretical rate when used exactly as directed.

The London Telegraph quotes Dr. Richard Anderson, “a specialist in reproductive health at the University of Edinburgh,” who puts Natural Cycles’ “pregnancy rate at seven per 100 women in a year.” This would mean a success rate of 93 percent.

Another doctor, Adam Balen of the British Fertility Society, told the Telegraph, “Any device that monitors menstrual cycle is fallible as women don’t always ovulate predictably every month.”

However, Sister Mirkes said such claims about a high failure rate for NFP “should be thrown in the circular file.” Those who make them have not seen the research, she said.

Though available in Britain since 2013, Natural Cycles has suddenly generated a flood of English-language news stories because it has just won approval as a medical “device” for contraception for the European Union. It will be marketed as such in the UK. It is the first NFP app to secure this classification.

While there are dozens of fertility apps available in the U.S., none has the Food and Drug Administration’s approval as a contraceptive, says Ann Gundlach, the communications director for Couple to Couple League. Like WOOMB and the Billings Ovulation Method, CCL is a response to Humanae Vitae. It teaches the sympto-thermal method.

Its 650 volunteer couples teach other newlywed couples two-on-two how to track fertility with three measures. These are the women’s base body temperature, her mucal secretions and changes in her cervix.

CCL developed a computer program eight years ago and a phone app called CycleProGo three years ago. Gundlach stressed that the app is only for couples already instructed in the method.

Gundlach noted that most fertility apps have been rated by an independent organization called FACTS, whose main purpose is to get NFP taught in medical schools. (FACTS stands for Fertility Awareness Collaborative to Teach the Signs.)

In promoting the Natural Cycles app, Berglund’s company made claims about her scientific achievements derived from her time at CERN, the Swiss-based European Nuclear Research Centre that isolated the Higgs Boson particle in 2012.

A year later, the Nobel Prize in physics went to Peter Higgs and Francois Englert for postulating, in 1964, the existence of the Higgs Boson, “a mechanism that contributes to our understanding of the origin of mass of subatomic particles.”

Berglund’s team confirmed it via experimentation using CERN‘s Large Hadron Collider. Berglund has either identified herself, or let herself be identified in some promotional literature, as “a particle physicist and discover[er] of the Higgs Boson,” and in other places as “Nobel prize-winning physicist Dr.Berglund.”

However, the claims are weak. She was one of 6,000 scientists at CERN involved in the Higgs Boson experiments. None of them shared in the Nobel Prize. This even prompted an article in Real Clear Science decrying this omission as an injustice, titled “Why Didn't CERN Win the Nobel Prize for Higgs Boson?”