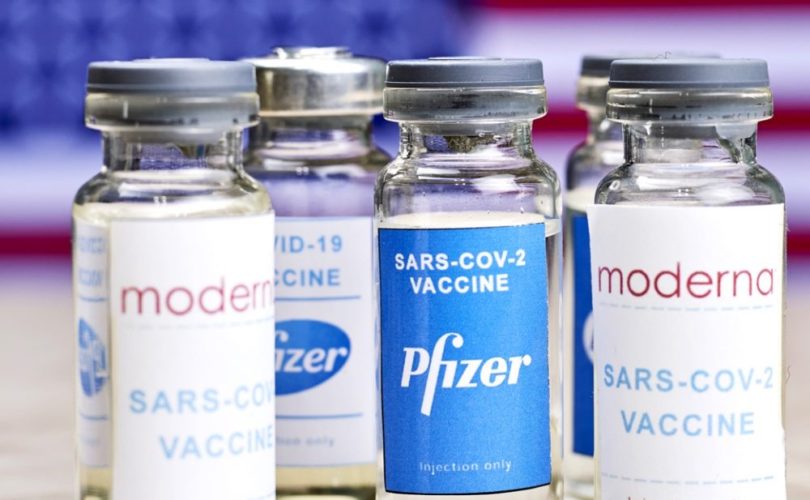 But evidence is mounting that the Pfizer and Moderna vaccines cause similar adverse reactions — and U.S. regulatory officials were alerted to that fact as far back as December 2020.

The Centers for Disease Control and Prevention (CDC) on Wednesday convened an emergency meeting of its Advisory Committee on Immunization Practices (ACIP) to determine whether to lift a ban on the J&J vaccine. The ban was put in place Tuesday, after reports of blood clots.

During the meeting, committee members hailed the Pfizer and Moderna mRNA vaccines as great alternatives to the J&J vaccine because there were “no safety signals” — suggesting, unlike the J&J and AstraZeneca adenovirus-based vaccines, mRNA vaccines are not associated with blood clots.

On Tuesday, Peter Marks, director of the Center for Biologics Evaluation and Research at the U.S. Food and Drug Administration (FDA), said on a call with reporters there had been no reported cases of cerebral venous sinus thrombosis (CVST) with thrombocytopenia (low blood platelets that can cause dangerous internal bleeding) following Pfizer and Moderna vaccines.

Utilizing a search criteria that included reports of blood clots associated with blood coagulation disorders, VAERS yielded a total of 795 reports for all three vaccines from Dec. 14, 2020 through April 1, 2021.

Of the 795 cases reported, there were 400 reports attributed to Pfizer, 337 reports with Moderna and 56 reports with J&J — far more than the eight cases under investigation, including the two additional cases added Wednesday.

A study released today by Oxford University found the number of people who developed CVST blood clots after COVID vaccines was about the same for Pfizer, Moderna and AstraZeneca, MarketWatch reported. (J&J is not approved for use in the EU, where the study originated).

“These findings are consistent with what we know about how vaccine-induced spike proteins can on their own cause cell signaling through interactions with the ACE-2 receptors,” said Lyn Redwood, RN, MSN, president emerita of Children’s Health Defense. “When this happens, it can result in inflammation and a host of other potentially pathological events in the epithelial lining of the blood vessels which can then trigger pro-inflammatory cytokines capable of activating coagulation systems and down-regulating anticoagulant pathways resulting in clot formation.”

A study published February in the Journal of Hematology examined thrombocytopenia following Pfizer and Moderna vaccination in response to the death of a 56-year-old Florida physician — the first identified patient who died from a brain hemorrhage after receiving Pfizer’s vaccine.

After analyzing data researchers could not exclude the possibility that the Pfizer and Moderna vaccines had the potential to trigger ITP and recommended additional surveillance to determine the incidence of thrombocytopenia post vaccination.

“While the main concern associated with ITP is bleeding, it may come as a surprise that ITP is also associated with a 20% increased risk for blood clots,” Redwood said, pointing to a March 8 article by Dr. Robert Bird, director of haematology at Princess Alexandra Hospital in Brisbane, Australia.

Physicians weigh in on how vaccines might lead to blood clots

The Association of American Physicians and Surgeons (AAPS) said in an April 5 press release all three vaccines approved for emergency use in the U.S. (Pfizer, Moderna and J&J) cause human cells to manufacture the spike protein, which then induces the immune system to make antibodies to that protein.

When a vaccinated person is then exposed to the virus, the immune system will recognize the threat and mount a defense that should at least minimize symptoms.

The spike protein is just a fragment of a virus, so it — or the mRNA that codes for it — cannot cause an infection. However, there are questions about whether the spike protein itself can cause harm as it binds to tissue receptors, AAPS explained.

AAPS physicians and scientists informed the FDA that mRNA products, through spike proteins, may have “the potential to cause microvascular injury [inflammation and small blood clots called microthrombi] to the brain, heart, liver and kidneys in ways that were not assessed in the safety trials.”The FDA has not responded.

On April 13, Dr. Hooman Noorchashm, a physician-scientist and advocate for ethics who specializes in cardiothoracic surgery, joined Tucker Carlson on his show to discuss blood clots and vaccines.

“I don’t know why this cluster is sort of affecting J&J. There are certainly other examples of thrombotic events with Pfizer and Moderna that have been entered into the VAERS system,” Noorchashm said.

On Dec. 8, 2020, before any COVID vaccines received Emergency Use Authorization in the U.S., J. Patrick Whelan, M.D., Ph.D., wrote the FDA about the potential for vaccines designed to create immunity to the SARS-CoV-2 spike protein “to cause microvascular injury and blood clots throughout the body including  the brain, heart, liver and kidneys in ways that were not assessed in the safety trials.”

As The Defender reported in February, Whelan, a Harvard-trained physician with a background in biochemistry, medicine and rheumatology, did not dispute the vaccines’ potential to quickly arrest the spread of the virus — assuming the vaccines prove to actually prevent transmission, which also was not assessed in the clinical trials.

But Whelan cautioned that “it would be vastly worse if hundreds of millions of people were to suffer long-lasting or even permanent damage to their brain or heart microvasculature as a result of failing to appreciate in the short-term an unintended effect of full-length spike protein-based vaccines on other organs.”

The J&J vaccine was paused because six women in the U.S. developed a rare and serious disorder called cerebral venous thrombosis which occurs when a blood clot forms in the brain’s venous sinuses. The clot prevents blood from draining out of the brain. As a result, blood cells may break and leak blood into the brain tissues, forming a hemorrhage.

According to Redwood, cerebral venous thrombosis has also been reported in cases of COVID-19 infections. She explained how the same condition that can occur in someone infected with the virus might also occur in someone who gets a COVID vaccine.

“The science has progressed rapidly and we are now aware that the spike protein alone, without COVID infection, is capable of traveling through the body and binding to ACE-2 receptors and activating a host of cell-signaling pathways capable of triggering a wide range of adverse events,” Redwood said.

A landmark study in Nature Neuroscience documented that commercially obtained COVID-19 spike protein (S1) injected into mice not only crossed the blood-brain barrier into the brain, but also the lung, spleen, kidney and liver of the mice.

A second study published in Neurobiology of Disease reported that the SARS-CoV-2 spike protein alone, without the virus, is a potent inductor of endothelial dysfunction through interaction with ACE-2 receptors resulting in a pro-inflammatory response in the vessel linings.

The endothelium is a thin membrane that lines the blood vessels that control vascular relaxation and contraction as well as enzymes that control blood clotting, immune function and platelet adhesion. Following vascular injury that can be caused by inflammation generated by spike proteins the endothelium shifts to a pro-thrombotic/pro-coagulant phenotype resulting in blood clot formation and other untoward events.

According to Redwood, it’s “only logical to assume” that when the vaccine creates the identical spike protein that occurs in infection, and which has been identified as the culprit causing a myriad serious and life threatening injuries, “we are going to see these same injuries in individuals who receive the vaccines.”

Redwood said it’s critical that we thoroughly research these vaccine-related injuries before we resume vaccination with spike protein vaccines, especially in children where we have no real data on safety and effectiveness.