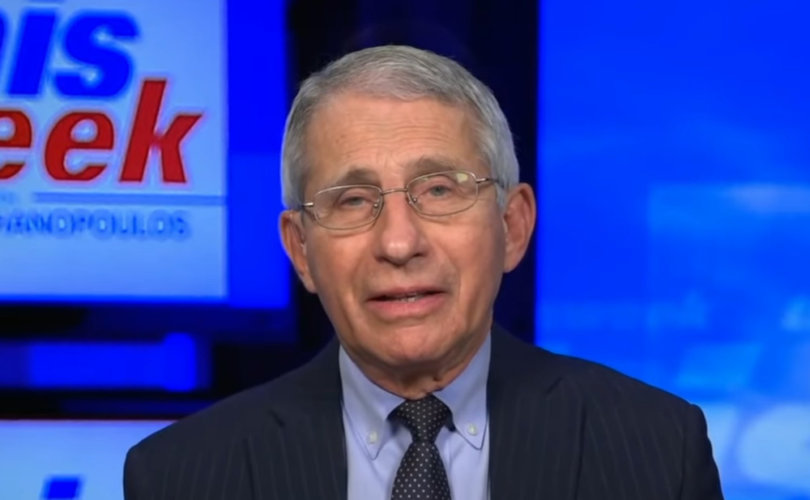 NOIDA, India, June 16, 2021 (LifeSiteNews) – An Indian scholar and veteran political commentator has stated that critics of the “bunkum” natural origins theory of COVID-19 have been prevented from promoting the lab leak theory, due to the threat of “Doctor Fauci and his gang” destroying their careers.

Professor Madhav Das Nalapat, the Director of Geopolitics and International Relations and UNESCO Peace Chair at Manipal University in India, made the comments earlier this month on one of India’s English-language news channels, NewsX.

During the June 3 NewsX discussion on Dr. Anthony Fauci and the origins of COVID-19, Nalapat raised strong concerns about the trustworthiness of the director of the U.S. National Institute of Allergy and Infectious Diseases (NIAID), in light of his recently published emails.  The emails have notably revealed that Fauci was informed about the possibility of COVID having originated in a laboratory, yet despite evidence presented to him, Fauci has consistently downplayed the so-called lab leak theory.

“What is the most disgusting in this whole thing, is the cover-up,” Nalapat said.

“Any scientist who spoke up was strictly warned that ‘Look here, you are going to have your career destroyed’.”

Nalapat did not reference any specific examples to support his claim but mentioned contacts, in both the U.S. and Japan, who had informed him of the news.

“Friends in the United States and Japan extensively briefed me that this theory [of the natural origin of COVID-19] is complete bunkum,” he stated.

Nalapat’s comments were followed by a tweet he posted some days later, in which he indirectly attacked Fauci once again: “As yet those who participated in such suicidal ‘gain of function’ experiments have escaped even censure much less punishment.”

The professor is not alone in making such claims. Washington Post columnist Josh Rogin also warned that Fauci was too untrustworthy to give statements on the origins of COVID-19 and described the culture of censorship which surrounded any potential opposition to him.

“I often talk to scientists who say the same thing, who say, ‘Listen, we really want to speak out about this, but we can’t do it’,” Rogin revealed.

Robert Redfield, the former director of the Centers for Disease Control and Prevention (CDC) from 2018 through 2021, publicly claimed that he had received death threats after expressing his opinion that COVID-19 had escaped from the Wuhan lab. Redfield did not pursue this by accusing China of having deliberately related the virus, ruling out any accusation of “intentionality.”

But in comments made to Vanity Fair, Redfield said that he had received death threats from fellow members of the scientific community in response for his televised comments. “I was threatened and ostracized because I proposed another hypothesis. I expected it from politicians. I didn’t expect it from science,” Redfield said.