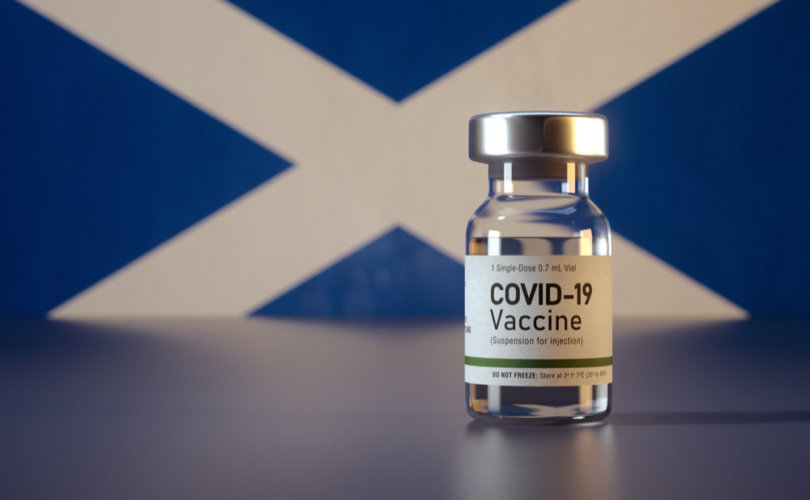 EDINBURGH, Scotland (LifeSiteNews) — New data from the health authority in Scotland shows that infection and hospitalization with COVID-19 is more likely among those who have received at least one shot of a COVID jab than those who have not received any of the shots, and that death following a double dose is much more likely than without having had any shots.

The latest report on COVID from Public Health Scotland (PHS) shows that case rates for people testing positive for the virus were consistently lower among the unvaccinated from December 11 until January 7, save the first week in which the triple-jabbed reported a slightly lower infection rate than the un-jabbed.

The double-jabbed consistently returned the highest infection rate, experiencing double the infection rate of the un-jabbed in three of the four weeks and only slightly less than double the rate in the remaining week.

The single- and triple-jabbed experienced lower infection rates than the double-jabbed over the same period, but still recorded an average of between 1.3 and 1.4 times the number of infections among the un-jabbed.

Regarding hospitalization with the virus, the double-jabbed were more likely to be admitted than all other categories, including those who had not received a shot, again reporting over double as many admissions in the last week of the report than the un-jabbed. Those who have received a booster shot were least likely to be hospitalized, with the single-jabbed showing higher admissions than the un-jabbed in just one week.

PHS has attempted to explain the steep increase in infections, hospitalizations, and deaths among COVID-positive individuals who have received two shots of the abortion-tainted jabs by pinning the blame on people over 70 who have not yet received a booster shot.

“This group of individuals aged 70-plus who have had two doses of vaccine but have not yet had a booster may include some very vulnerable individuals,” the report stated.

A spokeswoman for PHS added that the “vaccination status of cases, inpatients, and deaths should not be used to assess vaccine effectiveness because of differences in risk, behaviour, and testing in the vaccinated and unvaccinated populations.”

However, the trend observed in Scotland for the double-jabbed population corroborates a study released by Danish researchers, published December 20, which shows that people with two doses of an mRNA COVID shot have a higher likelihood of catching omicron than those without a jab.

England and Wales, Scotland’s national neighbors, have also reported record infections and higher COVID rates among vaccinated people in all age groups over 18 years old. The vaccinated have likewise come to dominate COVID hospitalizations and deaths in the remainder of the U.K., as shown in the U.K. Health Security Agency’s latest weekly COVID report.

Similar statistics have been recorded in other highly vaccinated European nations, as well as parts of the United States.

In addition, Professor Gili Regev-Yochay, an Israeli researcher,  has said that the preliminary results of a study into the effectiveness of a second booster, or fourth dose, show that the current crop of COVID jabs are “not good enough” since they have proved to be “less effective against the omicron strain.”