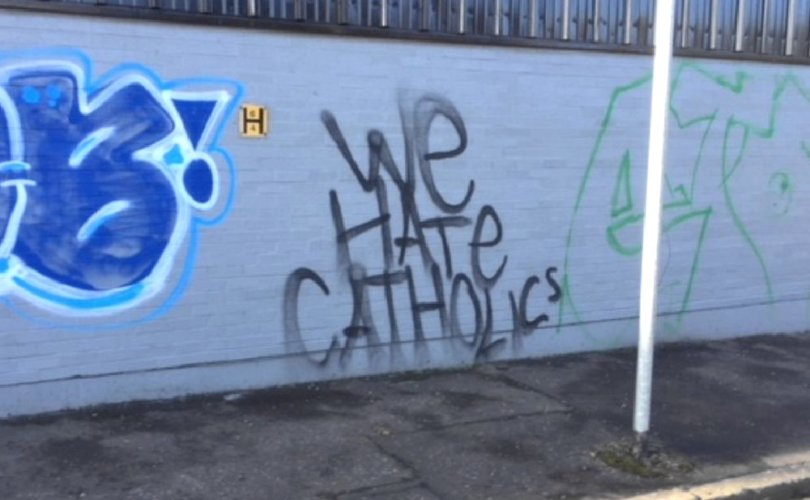 EDINBURGH, March 26, 2018 (LifeSiteNews) – A Member of Scottish Parliament is demanding more be done to protect Catholics after a report revealed that they bear the brunt of religiously-motivated hate crimes in Scotland.

Roman Catholics comprise only 15 percent of the Scottish population but suffer 57 percent of all religion-motivated hate crimes.

On March 15, Elaine Smith, the MSP for Central Scotland, outlined to Holyrood, Scotland’s devolved parliament, how Roman Catholics are being targeted more than any other religious group.

Smith raised the issue during General Question Time after another MSP asked the Scottish government what it was doing to combat “sectarian-related hate crime.” Fulton McGregor,  the member for Coatbridge, reminded the Minister for Safety and Community Affairs that the Blessed Sacrament had recently been “vandalised” in a Roman Catholic church in his constituency.

Smith underscored that it is anti-Catholicism, not even-handed sectarianism, that is the problem in Scotland.

“Is the minister aware that, although successive Scottish Governments have put significant resources into tackling the symptoms of sectarianism, there has been an increase in religious hate crime during that period,” she said, “with the latest figures showing that Roman Catholics were subject to more attacks than all other religious groups combined, and that that is an increasing trend?”

Smith quoted Archbishop Tartaglia's assertion that “our problem is not so much sectarianism as anti-Catholicism”, and asked what  “targeted action” the Minister would take to “specifically address” discrimination against Catholics in Scotland.

‘No appetite for acknowledging the problem of anti-Catholicism’

Peter Kearney of the Scottish Catholic Media Office told LifeSiteNews that he and other Catholics had raised these points many times with the government, but haven’t had a response.

“There’s no appetite for acknowledging the problem of anti-Catholicism,” Kearney said.

He said that the government’s refusal to target a specific problem was in stark contrast to other policies hoping to change public behavior. For example, the Scottish government doesn’t ask residents to “have good health”; it targets specific problems like smoking or drinking. Similarly, the police are not content just to ask people to drive safely; they target specific dangerous practices, like texting while driving.

“Religious hate crimes are the exception,” Kearney said. The specific and very real problem of anti-Catholic hate crimes is blanketed by a general policy of anti-sectarianism.

Smith said the SNP Government should “go out to the Catholic population and listen to their concerns.”

The Minister of Safety and Community Affairs Annabelle Ewing replied that the government took “religious bigotry” very seriously and would continue to work with churches, faith groups and “others” to tackle sectarianism.

Ewing’s response suggested that she thinks “sectarianism” is still a problem among rival churchgoers. However, according to the most recent Scottish Churches Census, there are only about 390,000 regular churchgoers in Scotland, representing just 7.2% of Scotland’s population. Approximately 42% of them are over 65 years of age.

“Interchurch relationships in Scotland are extremely good,” Peter Kearney told LifeSiteNews. He doubts the perpetrators of anti-Catholic attacks ever attend church. However, he says he has very little evidence of the motivations of the perpetrators.

Speaking anecdotally, Kearney said he believes that “residual identities are being misused.” Scotland suffers from the legacy of anti-Catholicism, which dates back to the banning of the faith during the Protestant Reformation, he said. Kearney compared this legacy to the legacy of American slavery, which was banned in the nineteenth century but whose effects can still be seen today.

Although their religion was decriminalized in the 1780s, the Catholic minority was marginalized in Scotland for the next two hundred years. When Irish migrants arrived in large numbers, tensions between Catholic and Protestants exacerbated. Until late into the 20th century, Catholics were very often denied professional advancement in white-collar careers and in established businesses because of their religious background.

Scotland’s football fans, particularly in Glasgow, have served as the Scottish government’s scapegoats for sectarianism, in part because of rivalries between historically “Catholic” and “Protestant” soccer clubs. However, soccer rivalries are involved in only 15% of anti-Catholic attacks. And, as Kearney pointed out to LifeSiteNews, Scottish anti-Catholicism predates football clubs by hundreds of years.

Kearney said that official statistics on anti-Catholic hate crimes are “only the tip of an intolerance iceberg.”