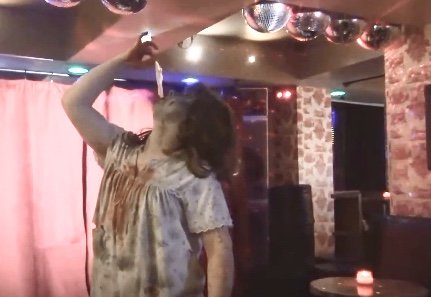 Drag queen Ivy Adamas pulls a condom out of his mouth during his act.YouTube screenshot

February 6, 2020 (LifeSiteNews) – A new pro-family political party in Scotland stopped a drag queen from performing at a local high-school after producing a video highlighting the disturbing and graphic sexual nature of his regular acts.

“In particular, we note the inclusion of two drag queen acts,” Lucas wrote. “At the Scottish Family Party, we are of the view that such acts promote a philosophy of gender fluidity that is confusing and dangerous to young people. We are also very aware that the drag scene is often associated with less than positive values.

After including a link to the video the party produced about the drag queen, Lucas continued. “Of concern are the blood-stained dress, foul language, graphic sexual vulgarity (“I want to eat your dick” etc.), overtly sexual movements (such as masturbatory motions), crude fake female genitals, and the extraction of a condom from his mouth.”

“We assume that this invitation was extended to Ivy Adamas without the knowledge that he is entirely unsuitable as a role model for school children?” the letter continued. “Similarly, we hope that you now regard your endorsement (expressed through your liking of the announcement tweet) as regrettable, now that you have more information.”

“So, we invite you to retract your endorsement of this act in your school, and to cancel this performer. If you reply by Wednesday 5 February, we will be able to report your changed stance when we comment publicly and contact media organisations with the story. In the event that we don’t hear from you by then, we will assume that your position is unchanged and will commentate accordingly. We hope that you appreciate the opportunity to reconsider what we are providing.”

On Tuesday, headteacher Claire Slowther replied to Lucas’ email informing him that Adamas’ act has been cancelled.

Slowther expressed the school’s commitment to “ensuring that children and young people who are lesbian, gay, bisexual, transgender or intersex (LGBTI) experience an inclusive education and learn about LGBT issues at school,” but said “(w)e have become aware that one of the performers who was initially booked to perform, had a video on YouTube which was not suitable for a teenage audience. We have since made the decision that they will no longer perform. We would take this approach for performers at any type of school event.”

Responding to the school’s decision, Lucas told LifeSiteNew,: “LGBT indoctrination in Scottish schools is government policy, but Dunbar Grammar School seems to be particularly determined to instill the values of LGBT activists into its pupils. We managed to pressurize the school into canceling one act, but it’s a small victory. The rest of the show goes on in his school and most others.

“It will only change with a change of political direction – and our mission is to bring that about,” he said.

At the end of his video, Lucas called on the people of Scotland to elect Scottish Family Party MSPs so that “we can protect children all over Scotland.”

“What did we learn here? What we learned is that this performer, this purveyor of filth, was invited into a school to perform for school children. Who stopped it? Was it the headteacher who had good judgment and insight? No. Was there any staff in the school that said, ‘Hang on a minute?’ No. Was it the council that supervises that school, that is responsible for it? No. Was it the parents. Well, no, because probably most of them didn’t really know about it. Was it the local MSP that came along and said, ‘I'm not sure what you're doing here.’ No,” he said.