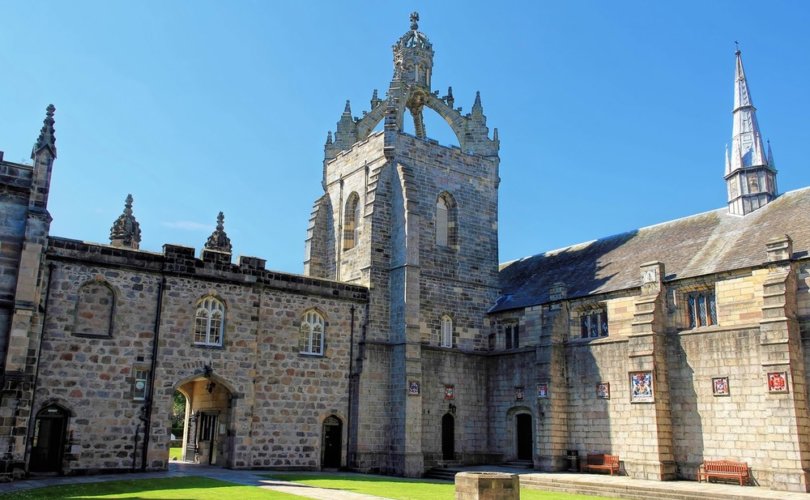 ABERDEEN, Scotland, November 29, 2018 (LifeSiteNews) – Another Scottish university has barred its pro-life students from registering as an official student group.

The Aberdeen Life Ethics Society has been prevented from affiliating at Aberdeen University by the officially pro-abortion Aberdeen University Students Association (AUSA). According to the Scottish Herald, AUSA has a so-called “pro-choice” policy supporting “free, safe and legal access to abortion.”

Alex Mason, the spokesman for the Aberdeen Life Ethics Society (ALES), told LifeSiteNews today that he got the idea for the group this March, and that the pro-life group has filed an official complaint.

“I attended a student election hustings where all the candidates for office expressed their support for abortion-on-demand,” he said.

“It was clear to me that such candidates did not represent my own views or the views of other pro-life friends I had on campus. Recognizing that Aberdeen has a very vocal ‘pro-choice’ faction, I wanted to start a university society which offered pro-life students the ability to connect and discuss important issues in life ethics,” he continued.

Complying with AUSA's requirements for newly proposed societies, Mason gathered the names of more than twenty students who supported the formation of ALES. In April, they submitted their application and began to wait.

They heard back from AUSA almost six months later.

“As is now known, we were told that our application was rejected because our existence would violate a ‘pro-choice’ policy adopted by AUSA in November 2017,” Mason said.

“Our next step was to initiate the official complaint process offered by the University administration. We believe that our freedoms of speech and association are being unlawfully constrained by AUSA, and so we've asked the University to arbitrate a resolution. We expect to soon receive an answer to that request,” he added.

Mason reported that his group has had some pushback in the form of angry emails and comments on their Facebook page.

“Once we receive official status as a society, I expect that our events or meetings may get protestors,” he admitted.

“Our goal is to facilitate peaceful and civil debate regarding important issues in life ethics. To that end, we would welcome any and all students to participate respectfully in our public events, even if they do not share our pro-life position. Those in honest pursuit of knowledge should not fear disagreement. Understanding is often sharpened and refined in the crucible of debate.”

John Deighan, the CEO of Scotland’s Society for the Protection of Unborn Children (SPUC-Scotland), told LifeSiteNews that the ban said something about the abortion lobby’s need to silence opposition.

“Of all places, a university should be a place where debate and discussion are encouraged,” he said.

“It is very telling that pro-abortionists feel the need to silence those who won’t tolerate those who voice a different opinion from their own,” Deighan continued.

“Let’s hope that freedom of speech prevails and that the AUSA position is overturned. If it isn’t, it would be a defeat for freedom of speech [and] academic freedom and a stain on the reputation of the university.”

AUSA’s extreme pro-abortion policy forbids funding, supporting, or even providing a “platform” (the opportunity to speak) to pro-lifer speakers. It also, tellingly, refers to pregnant “people” rather than pregnant women. Among the groups permitted to affiliate at Aberdeen University is “Sexpression Aberdeen,” whose members go into local schools to discuss sex with children as young as 10.

Established in November 2017, the policy states that AUSA’s Council believes that “fundamentally access to abortion is an issue of bodily autonomy, and that [AUSA] needs to take a strong pro-choice stance in solidarity with pregnant people in countries where abortion is not freely accessible and towards decriminalisation of abortion in the UK.”

The Council resolved that AUSA should “campaign against directive advice groups and offer no funding, facilitation or platform to any such group that may offer advice that conflicts with the advice given by either AUSA or a body/service recommended by AUSA.”

It also resolved that “AUSA should oppose the unreasonable display of pro-life material within campus and at AUSA events.”

Aberdeen University was founded in 1495 by William Elphinstone, the Bishop of Aberdeen, with the permission of  Pope Alexander VI. Its motto is “Initium sapientiae timor domini,” or “The fear of the Lord is the beginning of wisdom.” It is the third oldest university of Scotland.