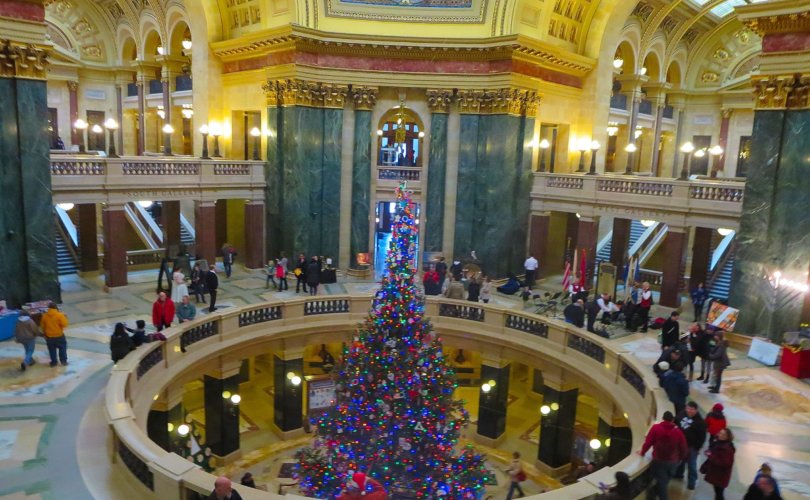 November 19, 2019 (LifeSiteNews) – When Wisconsin’s newly installed Democratic governor chose to refer to the Statehouse Christmas tree as a “Holiday tree,” his predecessor, Republican Scott Walker, spoke out in order to educate the liberal now occupying the Governor’s Mansion.

“This is a Christmas tree that is used by people celebrating Christmas,” wrote Walker above a picture of a beautifully decorated Christmas tree.

“This is not a holiday tree,” he added.

This is not a holiday tree. pic.twitter.com/KcF2ZJxtTJ

To underscore his point, Walker issued a second tweet:

“This is a Menorah,” wrote Walker. “This is lit during the Festival of Lights as part of Hanukkah.”

“This is not a holiday candle holder,” he added.

This is a Menorah candle this is lit during the Festival of Lights as part of Hanukkah.

This is not a holiday candle holder. pic.twitter.com/3pUUr2vBEL

In an interview on Fox & Friends, Walker pointed to a glaring discrepancy in terminology between Democratic Gov. Tony Evers and the state’s Department of Agriculture, Trade and Consumer Protection.

“You really can’t make this up,” said Walker. “The state agency that deals with agriculture and trade — the same week that the turnaround was made to call it a holiday tree again — actually put out a release talking about the sale of what? Christmas trees.”

Walker noted that the cultivation and sale of freshly cut Christmas trees are an important part of Wisconsin’s economy.

“No disrespect to people who practice other faiths,” said Walker. “But Christ is right in the name of Christmas. That’s what this is all about.”

“It's just one of those where sometimes you think people are looking for ways to be offended,” said the former governor.