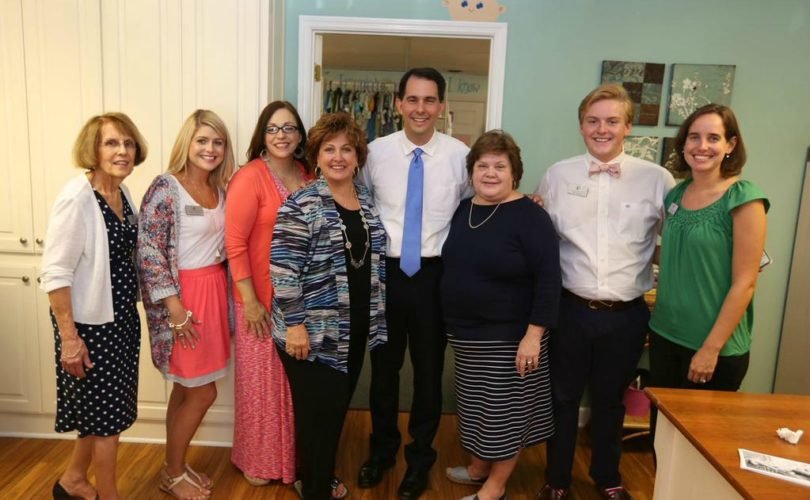 SPARTANBURG, SC, August 28, 2015 (LifeSiteNews) — It's good to be a pro-life pregnancy center in a leading primary state.

Heartbeat International President Peggy Hartshorn said that Walker's visit, coming on the heels of Bush's, “tell[s] us that presidential candidates are recognizing what we have been saying all along, that pregnancy help organizations are good for America.”

“Each of these vital groups function as a locally supported beacon of light, because no woman should ever feel so alone, coerced or hopeless that she ends her child’s life through abortion,” said Hartshorn. “Pregnancy help centers are there because their communities want them to be. Any politician in touch with the needs and desires of women would join local communities in supporting and defending these radiant beacons of light and hope.”

Walker touts one of the strongest pro-life records in the large GOP presidential field. He has signed a ban on abortions after 20 weeks' gestation, diverted $130,000 in Planned Parenthood funding to other organizations, and signed a law requiring doctors to show women their children via ultrasound before having an abortion. The latter law also required abortionists to have admitting privileges at local hospitals, though this measure was overturned in court.

Hartshorn said the Planned Parenthood scandal has played a role in the Bush and Walker visits. “These videos shout from the mountaintops that women deserve better than abortion. Women desperately need emotional support and practical resources during an unexpected pregnancy, and that is exactly what is offered at every one of the 2,500 pregnancy help centers and medical clinics all throughout the United States.”