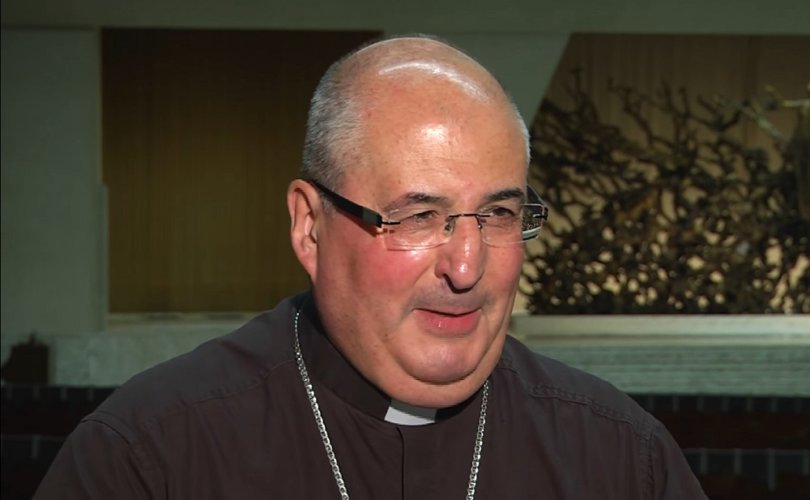 Archbishop Philip Tartaglia of Glasgow.Salt and Light via YouTube.

EDINBURGH, Scotland, March 26, 2019 (LifeSiteNews) ― The Catholic Church in Scotland has rejected proposals for new anti-hate laws despite Catholics being disproportionately singled out for attack.

A working group tackling the issue of hate crimes in Scotland is seeking to change current legislation in a way that may cause new problems, the Catholic bishops believe. These could include the criminalization of Catholic beliefs about sexuality and create currently nonexistent tension between practising Catholics and other churchgoers.

According to the Scottish Media Office, the Catholic Church’s submission to the Scottish Government’s consultation on hate crimes “questioned the use of specific aggravations in the prosecution of hate crimes in Scotland,” saying that this practise risks creating a “growing hierarchy of protected characteristics.”

The director of the Catholic Parliamentary Office, Anthony Horan, said that the current law against hate crime is adequate.

“We do not believe there is a need for sectarianism to be specifically addressed and defined in hate crime legislation,” he said.

“Existing legislation, including existing statutory aggravations, are adequate. We would oppose any move to shift existing protections to an unnecessary sectarianism aggravation and agree with Lord Bracadale that the absence of such an aggravation would not leave a gap in the law as both race and religion statutory aggravations can be attached to any base offence if proven,” he continued.

“Christian communities in Scotland enjoy a positive ecumenical relationship and we are concerned that government is proposing unnecessary legislation that undermines the development of community relations between them,” he said.

“The proposed aggravation assumes, wrongly, that where anti-Catholic, anti-Protestant, anti-Irish or anti-British bigotry or racism occurs, those responsible are from another Christian denomination or Irish/British ethnicity.”

Meanwhile, the Catholic bishops are concerned that the proposed new legislation will impinge on freedom of speech and freedom of religion.

“Suppressing the right to freedom of expression … will create divisions and foster grievances across society,” Horan warned.

“In a climate of heightened sensitivity there is a very real danger that expressing or even holding individual or collective opinions or beliefs will become a hate crime,” he continued.

“We must guard against this and ensure freedom of expression, thought, conscience and religion are protected. Some people might suggest that expressing the Catholic Church’s position on marriage or human sexuality could be an attempt to stir up hatred. This would obviously be wrong, but without room for robust debate and exchange of views we risk becoming an intolerant, illiberal society.”

The Scottish Catholic Observer noted last April that the working group contains no representatives from the Roman Catholic Church, despite Catholics “making up more than half of all victims of hate crime in Scotland, and despite two Church of Scotland ministers sitting on the panel.”

July, a Catholic priest in Glasgow was spat on as an Orange Order parade marched past his church. The Orange Order is not a religious denomination, but an international fellowship organized to celebrate British Protestant religion and heritage. The Order denied that Canon Tom White’s assailant was part of their parade. Also last July, a different Catholic priest was dismissed from his position as a university chaplain for having arranged a rosary in his parish church in reparation for sins committed during Glasgow’s LGBT Pride celebrations.