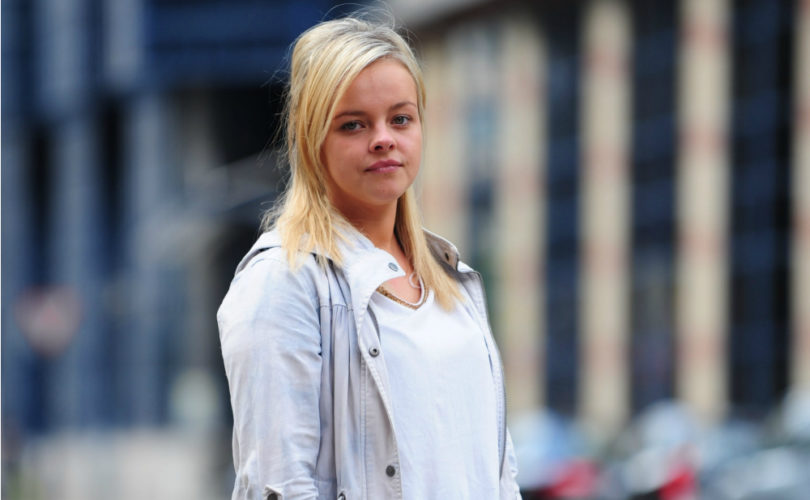 Teri Cumlin has won a £12,000 settlement after she was fired for refusing to abort her second child.

GLASGOW, June 24, 2015 (LifeSiteNews) — A Scottish mother who was fired for refusing to abort her second child has won a £12,000 settlement against the Glasgow fundraising company employing her.

With no father in the picture, and a three-year-old girl to raise already, 22-year-old Teri Cumlin nevertheless reportedly didn’t even consider abortion when she learned of her pregnancy last summer. But she says her boss, Mark Robertson, certainly did.

Now his employer, Engage, a company that raises funds for various charities, has been ordered to pay the equivalent of 19,000 USD as compensation for wrongful dismissal by a Scottish employment tribunal. Engage told reporters it has not contested the claim, nor, in fact, even heard of it until the ruling was announced last week, but was now looking into appealing.

Paul Tully of the UK’s Society for the Protection of Unborn Children commented: “Of course we are delighted that the young lady rejected abortion, but this certainly raises the question about what is the way to raise children that is best for the child, best for the mother and best for society.”

Robertson, according to what Cumlin told the Employment Tribunal, thought she shouldn’t be having the child at all. “He said to me, ‘Do you want to be that girl from Mayhill (her neighbourhood) with babies to different dads.’ And then it was, ‘If you want to have a career then I’d advise you to terminate your baby.’”

But Cumlin stood her ground. “I’m not going to have a termination,” she told him, adding, as a reason, that she’d just gone through a miscarriage.

Nonetheless Robertson harrassed her by demoting her, forcing her to stand in the sun at an outdoor event, and criticizing her work in front of others. Finally she was suspended and then fired, Cumlin told the tribunal.

Tully is puzzled at how the story has been reported solely as a workplace harassment of a photogenic blonde. “She deserves all plaudits for striving against odds to do the best for her children,” he told LifeSiteNews. “But there needs to be recognition that the best way to raise children is in the traditional family. If the family is degraded or sidetracked, it is not in anyone’s interests.”

Tully added that though his organization was not equipped to offer assistance to prospective single mothers, the larger pro-life movement included many organizations that did so, such as the Good Counsel Network in England and the Cardinal Winning Pro-Life Initiative in Scotland.