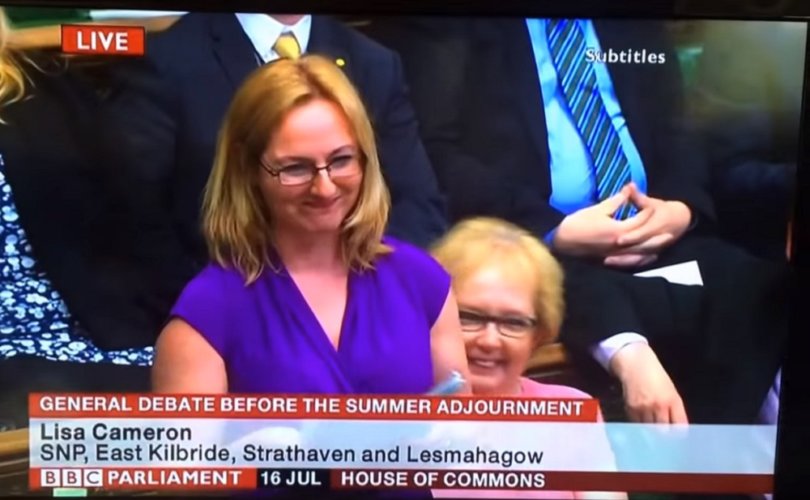 EDINBURGH, Scotland, July 19, 2019 (LifeSiteNews) ― More details are emerging in the story of a Scottish M.P. who was threatened after voting against a bill that could override Northern Ireland’s pro-life abortion law.

Dr. Lisa Cameron, the Scottish National Party M.P. for East Kilbride, Strathaven, and Lesmahagow in southwest Scotland, said her decision to vote against the pro-abortion legislation stemmed from her experience of suffering two late-term miscarriages and her religious beliefs.

Cameron is a member of the Church of Scotland, which follows the Reformed Presbyterian tradition.

The Protestant M.P. told the Scottish Catholic Observer that although she began to receive  “traumatic” and “horrific” abuse soon after the vote, the nastiness intensified when she explained her reasons on Facebook.

“As soon as I put the post up I was deluged by hateful responses,” she told the newspaper.

“People were really abusing me and my decision, saying that I endorse rape of women, sending me pictures of rape scenes and aborted foetuses and telling me I should be aborted myself.”

Cameron was surprised and disappointed when the SNP didn’t stand up for her against the abuse.

“I felt very alone and my family and I felt like we were left to deal with this ourselves, despite it being a vote of conscience,” she told the Catholic Observer.

SNP members were officially free to vote on the issue according to their consciences, but Cameron reported that afterward, party officials, including those who decide which members may stand for election, said they wanted her out of office. According to the Catholic Observer, Cameron stated that one SNP official had said nobody with pro-life beliefs should stand for election.

Bishop Hugh Gilbert, the president of the  Bishops’ Conference of Scotland, has written to SNP leader Nicola Sturgeon, the first minister of Scotland, to express solidarity with Cameron and to request public assurances that pro-life SNP members will indeed be permitted to run for office.

Bishop John Keenan of Scotland’s Diocese of Paisley has also spoken out in defence of the Protestant M.P.

“When a woman politician is abused in this way — for example people calling for her to be aborted — then you would expect the leadership of the party to immediately come out and defend her publicly and offer her support,” he told the Catholic Observer.

“They should say, first of all, that Lisa was entitled as an M.P. to vote the way she did, and that her freedom to do so is respected within the party and that they deplore anyone who would have abused her.”

“We hear there are suggestions that elements of her local party have begun a campaign to deselect her because she voted pro-life. It would be unacceptable for the SNP to do so and it would suggest that the SNP is a de facto pro-abortion party.”

Catholics, although only 15% of the Scottish population, may have played a decisive role in the SNP’s landslide win over the Labour Party north of the border in 2015, as 48% of them indicated that they would vote SNP. In 2016, Scottish Catholic composer James MacMillian criticized the Scottish Catholic Church for maintaining close ties with the secessionist party and suggested the SNP had “played” the Church “for useful fools.”