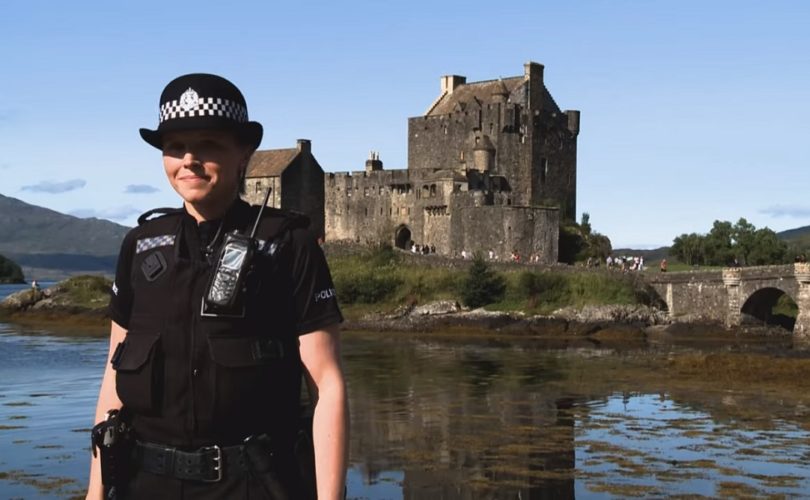 SCOTLAND, March 18, 2016 (LifeSiteNews) – Scottish police and homosexual advocacy groups are combining to train 60 officers as LGBT-hate crime specialists in an apparent effort to increase the number of hate crimes reported.

The move has raised concerns over the possible criminalization of any criticism of homosexuality. Peter LaBarbera of Americans for Truth About Homosexuality told LifeSiteNews, “Everyone is against hate and violence against homosexuals or anybody else. But are they setting up a politically correct hierarchy of victims with homosexuals at the top?”

According to the Equality Network, which will be training LGBT liaison officers for the Scottish police, there were 841 “sexual orientation aggravate crimes” in 2015 and 21 “transphobic” crimes. The press release adds, “there is said to be evidence of significant under-reporting.”

In evidence, the charity reports on a survey of LGBT Scots indicating that half had seen or been victims of “prejudice or discrimination” within the past month, as had 97 % in the past year, though neither “prejudice” nor “discrimination” are as yet crimes.

Fergus McMillan, chief executive of LGBT Youth Scotland, admitted that the training of police was an effort to raise crime numbers. “We are currently working with a range of partners, including Equality Network, to increase the reporting of homophobic, biphobic and transphobic hate crimes and incidents and improve the support available to those targeted.”

He added that the majority of homophobic crimes did not get reported, explaining, “Around half of all LGBT respondents would not feel confident reporting a crime to the police.”

Superintendent Jim Baird of Police Scotland encouraged more reporting, saying, “If anyone feels they have been the victim of, or witness to, a crime which is motivated by malice or ill will because of sexual orientation or gender identity they should report it to us directly, online, or through a third party reporting site.”

Canadian data from 2010 indicates that 16% of hate crimes that year were motivated by sexual orientation, but 65% were violent, twice the level for racial crimes and four times that for religious hate crimes.

According to groups such as Focus on the Family and Americans for Truth About Homosexuality, stressing such hate crimes is part of the overall “homosexual agenda” designed to portray homosexuals as victims and restrict the free speech of their critics.

Anti-homosexuality activist LaBarbera said the term “hate” had been “bastardized” and turned into a weapon to suppress fair comment by groups such as his about the real social and personal dangers of homosexuality. “Just how far will the term go?” he asked.

Renew America states on its website “The push for federal 'hate crimes' legislation is another activist tool intended to silence traditional views on human sexuality and sexual morality. Similar laws have already been used around the world, and even right here at home, to persecute Christians and other traditionalists.”

One Catholic crusader against homosexual behavior, Brother Damon Kelly, has been repeatedly arrested by police under suspicion of committing hate crimes by handing out fliers condemning homosexual relations. Commenting on the case, Andrea Williams, executive director of the Christian Legal Centre in London, said the British government and police were trying to maintain harmony in a multicultural state. “The police feel a responsibility to protect diversity, but they do not understand what is protected by free speech in public space.”

Brother Damon himself dismisses the idea that homosexuals are victimized in Great Britain,  noting that “there are 37 openly professed Gay MPs in Parliament.” He told LifeSiteNews, “The most discriminated against in Britain are the unborn, Muslims (especially since the ISIS threat), Romanians, and Gypsies[.] … So it begs the question: where are the specially trained police for these groups?”

Brother Damon added, “The LGBT's insistence that they are vulnerable and targeted is not from fear of persecution, but is a well thought-out strategy to increase their perceived importance and their power in being able to shape Government policies.”