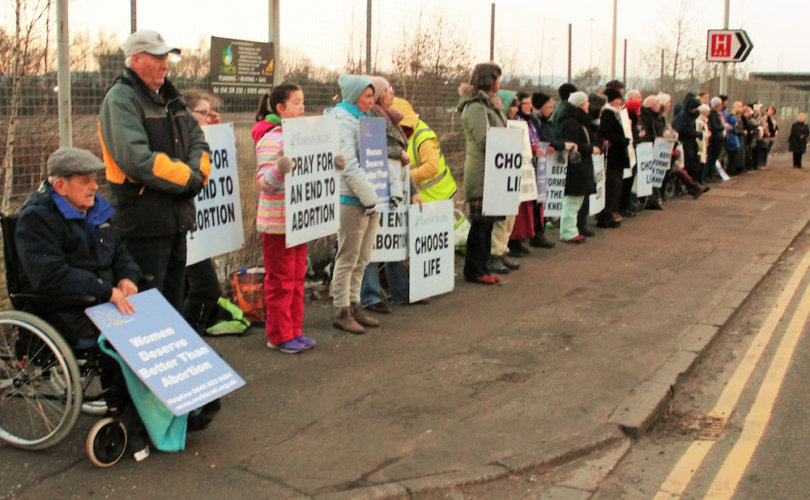 In Scotland, nearly all abortions take place in public hospitals. The vigils will be held at the Queen Elizabeth University Hospital in Glasgow, the Royal Infirmary of Edinburgh, Aberdeen Maternity Hospital, and Ninewells Hospital in Dundee.

Organizers say news reports indicating that the group was warned by authorities about being told where to stand are false.

“General secretary Grahame Smith's comments are not grounded in facts,” 40 Days for Life president Shawn Carney told LifeSiteNews. “40 Days for Life has conducted peaceful campaigns in 675 cities in 40 countries around the world without any intimidation or violence.”

“Our approach is peaceful, which is why 25 percent of our vigils are led by women who have had an abortion in their past,” Carney explained. “I personally visited the campaign in Scotland in 2016 and the Scottish media commented on how peaceful the vigils were, after hospital executives used fear rhetoric in an attempt to suggest otherwise.”

Glasgow 40 Days coordinator Rose Docherty told LifeSiteNews that claims of harassment and intimindation are a fantasy of the “toxic press.” The group is not required to seek permission to stand in a public right of way access outside the hospital grounds.

“We’ve never had a single charge laid against us, nor a single complaint relayed to us by the police,” Docherty said. “We stand and we pray peacefully all day. People of all ages and all levels of society.”

Docherty said pro-lifers came “from all over Scotland” to last year's 40 Days vigil. They carried peaceful signs and handed out bookmarks with contact information for the Sisters of the Gospel of Life.

“It's certainly not our intention to intimidate,” 40 Days Edinburgh coordinator Patricia Maclennan told LiteSiteNews. “We want to encourage women who want to keep their baby. We hope when they see us there, they will think, 'God is reaching out to me. Maybe I should listen to my heart and keep my baby.'”

Carney concluded, “Freedom of speech is something, no matter one's view of abortion, that should be celebrated in the United Kingdom and the United States. It makes our nations different from other parts of the world where many political and religious views are silenced.”