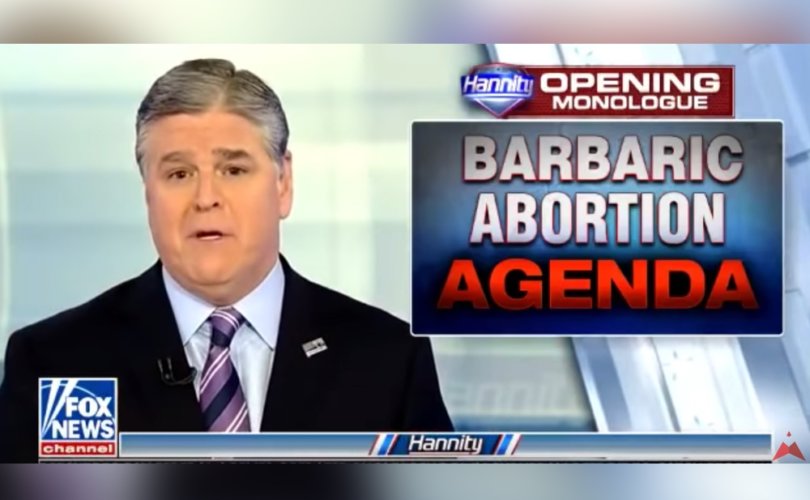 “These politicians want to make it perfectly okay, seemingly, to ‘terminate’ a baby that could easily survive outside the womb,” he added.

Hannity noted that when Virginia lawmaker Kathy Tran spoke in a hearing about her controversial bill that would allow abortion during birth, even she wasn’t comfortable defending her extreme position.

“This has nothing to do really with abortion,” said Hannity. “This is about an unconscionable, grotesque brutality.”

“[Virginia] Governor Northam once worked as a pediatric neurologist,” noted Hannity, “and now he’s willing to support a bill that terminates a viable living child in front of him.”

Tammy Bruce, one of three panelists, concurred with Hannity’s view that Democratic Party leaders now possess extreme views on abortion that do not reflect their constituencies, and depart radically from the views of most Americans.

“Sixty-one percent of Americans who identify as ‘pro-choice’ agree that [abortion] should be restricted to the first three months,” said Bruce. “Ninety-two percent of GOPers agree with that; 60 percent of Democrats agree; and 70 percent of independents.”

“For me, what is horrific, what is certainly brutal and ghoulish is that these kinds of laws posit the notion that women who are about to give birth are willing to kill their children,” said Bruce, “And this is what we’ve got to stand up against.”

“No one wants this,” she declared. “Certain Democrat leadership, we now know, are out of touch with the American people.”

A second panelist, Fox News contributor Sara Carter, said that the video of Gov. Northam shocked the consciences of residents of the state, calling it a “game changer.”

Cherishing the sanctity of life is central to a free republic, observed the third panelist, “Relatable” podcast host Allie Beth Stuckey. She said she sees the eroding of our views of human life as going hand-in-hand with the growth of socialism.

Because we are, as a nation, increasingly moving toward “denigrating the most vulnerable, the most marginalized, and the most helpless among us, it is no coincidence whatsoever that socialism is becoming more popular, more mainstream,” said Stuckey.

When the size of government and government power are allowed to “grow unfettered” as is favored by many Democrat politicians, the sanctity of human life is sacrificed, she argued.