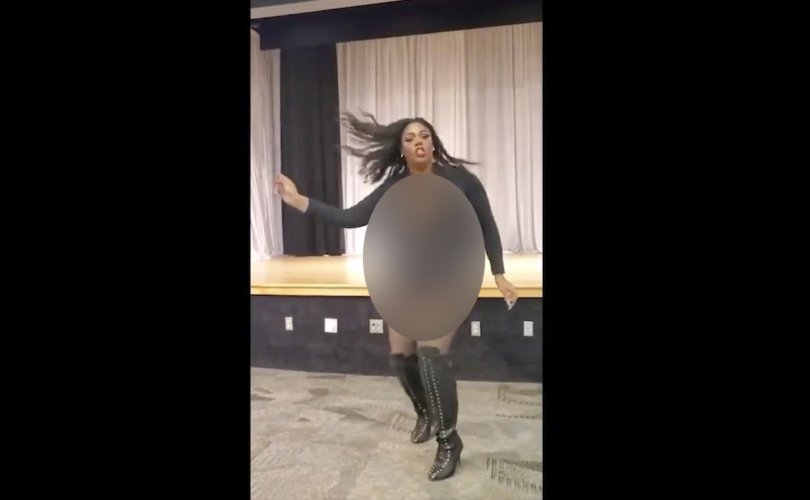 SEATTLE, December 17, 2019 (LifeSiteNews) – Controversy has erupted in Seattle after a county agency tasked with combating homelessness hosted a “transgender strip show” for unsuspecting attendees at a recent conference.

All Home is the agency that coordinates services for the homeless populations of King County. December 9 saw its annual conference, focused this year on “unpacking the current structures of power and the decision-making process within government, philanthropy and non-profit institutions,” and examining the “legacies of structural racism in our systems, and co-design(ing) a path towards liberation with black, indigenous, brown and other marginalized communities affected by homelessness.”

The intersectionality rhetoric gave a clear indicator of the event’s politics, but the event schedule listing of a “Lunch with Cultural Presentation” could have hardly prepared attendees for Spokane-based “trans woman” performer Beyonce St. James performing a strip show in a “revealing bodysuit” with “silver pasties,” according to The Seattle Times. The dancer also kissed attendees and performed lap dances. (Video here; viewer discretion advised.) The Times added that attendees were given no kind of advance warning of the nature of the “presentation.”

“The department is aware of an event that occurred during the All Home annual conference on December 9, 2019,” said Denise Rothleutner, deputy director of the King County Department of Community and Human Services. “We have placed the director of All Home on administrative leave pending the results of an investigation into the event and the leadership of All Home. Because there is an active investigation underway, I am unable to respond to specific questions about the event.”

The director in question is Kira Zylstra, whose agency had already been under scrutiny for alleged ineffectiveness. She has since resigned.

While county officials appear to be recognizing the event as a scandalous blunder, some are defending the show. Nikkita Oliver, who ran unsuccessfully for mayor of Seattle in 2017, claimed hosting a transgender strip show was no different than hosting a Christian gospel choir:

Ppl are mad a trans burlesque dancer performed at a publicly funded conference about homelessness; an issue which deeply impacts trans & queer communities, artists & sex workers. Do people get this mad when gospel choirs are the cultural performance at non-Christian conferences?

“Does the choir strip and twerk and inappropriately touch the conference goers? Do they give lap dances at this imaginary conference?” responded KTTH radio host Jason Rantz. “Go talk to literally any human resources manager and you’ll quickly discover why it was wrong.”