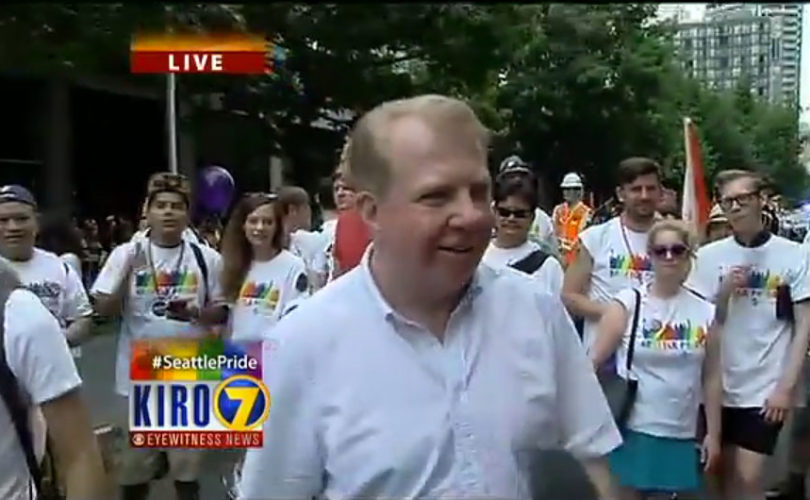 The mayor also commanded Seattle's Office for Civil Rights to give transgender sensitivity training to city employees, including Seattle Parks and Recreation, the Seattle Center, and the Seattle Public Library.

Peter LaBarbera of Americans for Truth told LifeSiteNews, “The Democrats are already the party of Big Homosexuality and Big Abortion. Now they are also the party that affirms gender confusion.”

“People who suffer from gender dysphoria do not need the government to affirm their aberrant desires and turn them into a supposed 'civil right,' LaBarbera said. “They need to get real help – because men cannot become women, and women cannot become men.”

“I'm happy that there are people like Walt Heyer who have lived the tragic reality of transgenderism and 'sex reassignment surgery' and now help others overcome,” LaBarbera noted.

“It is so sad that in the name of 'compassion,' Mayor Murray is helping to keep suffering people in bondage.”

Speaking of NYC Mayor de Basio's unilateral decree, Stephen P. Hayford of New Yorker's Family Research Foundation told LifeSiteNews that “the mayor's order addresses an issue that should have been handled (if at all) through legislative action.”

“Second,” Hayford continued, “the mayor's order is based on the confused notion that a person's gender is a legal construct 'assigned at birth' rather than a biological reality.”

“Third, and most importantly,” Hayford concluded, “the mayor's order completely fails to take into account the negative impact that opposite-sex restroom and locker room use by 'transgender' individuals in city facilities would have upon other users of those facilities.”

Murray is a professed homosexual, who claims to be married to another man, Seattle Parks and Recreation planning and development director Michael Shiosaki. The two began calling themselves married in 2013.