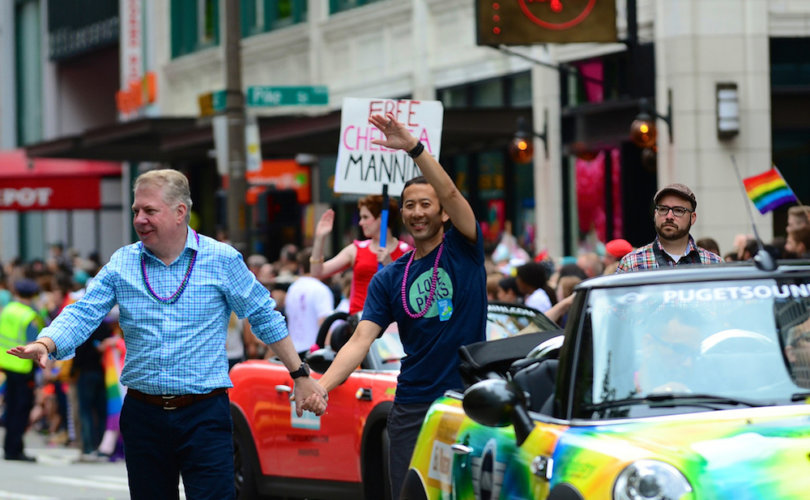 SEATTLE, Washington, July 19, 2017 (LifeSiteNews) — Ed Murray, Seattle's homosexual mayor who is “married” to another man and politically backed by the Gay & Lesbian Victory Fund, abused his foster son, according to a child-welfare investigator.

At least four men have come forward to accuse Murray of rape.

Delvonn Heckard says Murray “raped and molested” him as a teenager. Lloyd Anderson made a similar accusation against Murray in 2007. Jeff Simpson has repeatedly stated that Murray anally raped him for three years while he was Murray's foster son in the 1980s, starting when he was 13.

Both Heckard and Simpson said Murray gave them money for sex. Simpson added that Murray gave him drugs for sex, too.

The Democratic power broker and homosexual “rights” activist, who was elected mayor in 2013, backed out of his re-election bid in May amid the rape allegations. This week, some of Seattle's mayoral candidates called for Murray to step down.

Simpson wanted to sue Murray in 2008, but his lawyer declined because of the statute of limitations.

“Mayor Murray is a child molester,” Simpson said Tuesday in an interview with Fox 12 in Seattle. “The worst things that you can think of were what Ed has done to me.”

Now the Simpson allegations have found corroboration from an Oregon child-welfare investigator. Using documents long thought to have been destroyed, Oregon's Department of Human Services (ODHS) looked into Simpson's allegations in 1984.

“It’s nothing short of a miracle,” Simpson, wearing a Jesus Rules shirt, said in the Fox 12 interview. “All of a sudden, not only do we get the paperwork but we get all of the records that were supposedly destroyed.”

Child Protective Services caseworker Judy Butler concluded in her 1984 investigation: “In the professional judgment of this caseworker who has interviewed numerous children of all ages and of all levels of emotional disturbance regarding sexual abuse, Jeff Simpson has been sexually abused by Edward Murray.”

The caseworker's conclusion led state officials to determine that “under no circumstances” should Murray be given another foster child.

Apparently, ODHS waited until Murray took himself out of the race for mayor to release the documents at The Seattle Times' repeated request.

Murray responded to the latest documents, again denying the accusations and pointing out that the prosecutor never brought charges against him at the time. “Based on the totality of the evidence that was collected, the district attorney declined to file charges,” Murray's statement read.

However, The Seattle Times noted that it was not the validity of the accusations that gave Multnomah County Deputy District Attorney Mary Tomlinson pause but Simpson's “instability” and unavailability due to the fact that he was a runaway.

Tomlinson stated, “It was Jeff’s emotional instability, history of manipulative behavior and the fact that he has again run away and made himself unavailable that forced my decision.”

“We could not be sure of meeting the high burden of proof in a criminal case – of proof beyond a reasonable doubt and to a moral certainty,” the public servant explained. “This in no way means that the District Attorney’s Office has decided Jeff’s allegations are not true.”

Murray continues to deny the charges. He noted a physical exam of his genitals “disproved” one accuser’s description of a “bump” on his penis.

Former homosexual Joseph Sciambra notes that it's common for gay men to have been sexually used as a minor. “Typically almost everyone had a first lover that was older, experienced, and reassuring,” he wrote.

Simpson, whose lawyer had tried to find the documents in the 1984 investigation but was told none existed, reacted to The Seattle Times' vindication with relief. “Thank you, Jesus,” he reportedly said.