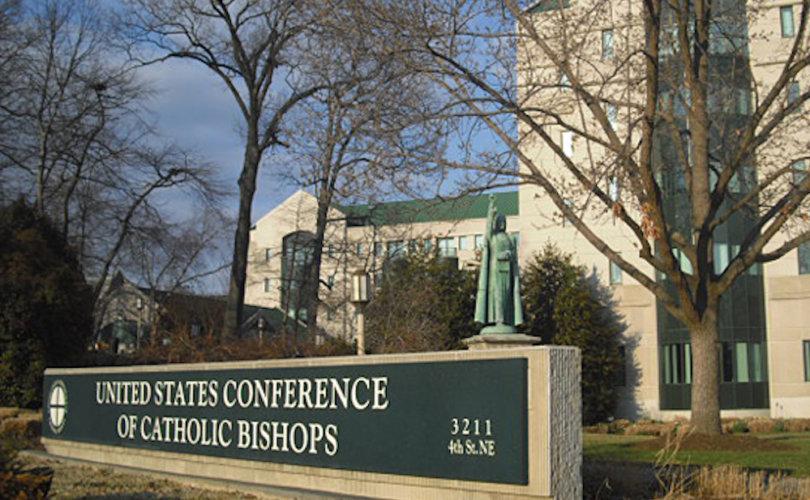 (LifeSiteNews) — The U.S. Conference of Catholic Bishops (USCCB) is voting for its next president and vice president Tuesday morning, and some leadership candidates take the conference in a radical, leftward drift if elected.

Of the ten candidates nominated by their fellow bishops for the USCCB’s top posts, a handful, including Archbishop Salvatore Cordileone of San Francisco, have generally strong records of defending Church teaching.

But others, like Archbishop Paul Etienne of Seattle, have shown disturbing patterns of supporting the LGBT agenda and attacking faithful Catholics.

Appointed by Pope Francis in 2019, Etienne notably backed the Pope’s heterodox affirmation of same-sex civil unions. In a statement defending Francis’ comments, Etienne suggested that catechesis is “not the starting point” for discussions about LGBT issues and failed to note that Catholic teaching specifically rejects any legal recognition of homosexual relationships as “gravely unjust.”

Etienne’s “accompaniment” of sodomites is in stark contrast to how he has approached Catholics who refuse to submit to coronavirus mandates. During the COVID era, the archbishop attempted to ban Catholics from receiving the Eucharist on the tongue or kneeling, threatened to shut down public Masses at a parish that did not enforce a mask mandate, and told clergy not to write exemption letters for jab mandates.

In 2021, Etienne joined more than 60 left-wing bishops, including Cardinals Blase Cupich, Wilton Gregory, and Robert McElroy, who lobbied the USCCB not to vote on denying Communion to politicians who facilitate and promote abortion.

Etienne lost the race to lead the USCCB finance committee last year to another pro-LGBT bishop, James Checchio of Metuchen.

Besides Etienne, problematic prelates in the running to lead the USCCB include Bishop Frank Caggiano of Bridgeport and Archbishop Gustavo Garcia-Síller of San Antonio, among others.

Bishop Caggiano served as chairman of Catholic Relief Services from April 2019 to April 2022, during which time the group promoted condoms and referred girls to an organization that provides contraception and abortion, as the Lepanto Institute has documented. Caggiano appointed a left-wing feminist to lead a parish in his diocese in 2018. In 2015, he stood by the city of Stamford’s decision to name a homosexual as the grand marshal of its St. Patrick’s Day parade. A spokesman for Caggiano praised the parade as “a day of inclusiveness.”

Archbishop Garcia-Síller is known for his relentless war against an orthodox parish in San Antonio, Our Lady of the Atonement Catholic Church. He evicted a group of traditional Poor Clare Nuns attached to the parish in 2018. Weeks later he rehabilitated a disgraced homosexual priest, green-lighting him for hospital ministry after he was removed from a parish in the Archdiocese of Chicago due to a homosexual relationship. Garcia-Síller has also raised eyebrows with his unhinged statements about President Donald Trump, whom he has accused of “hate and racism” and slammed as “a very poor man.”

Both Caggiano and Garcia-Síller signed the 2021 letter urging the USCCB to suspend discussions on Eucharistic worthiness.

Bishop Daniel Flores of Brownsville, the current head of the USCCB’s committee on doctrine, oversaw the bishops’ widely-criticized national report for the Synod on Synodality, which claimed that the Church “marginalizes” the “LGBTQ+ community” and highlighted calls for female ordination. The report, published in September, did not mention widespread support for Catholic teaching and criticism of Pope Francis voiced by Synod participants in the U.S.

Flores, who advocates for radical, far-left border policies, came under fire this year after his diocese’s Catholic Charities arm was revealed to have transported illegal immigrants with the Biden administration.

Archbishop William Lori of Baltimore, despite his record of orthodox public statements, has for years declined to take action against dissident pro-homosexual priests and hired a pro-LGBT activist as an advisor on “racial tension” in 2020.

Archbishop Paul Coakley of Oklahoma City has a history of supporting Church doctrine on life and sexuality and has said that politicians who support abortion and same-sex “marriage” should be denied the Eucharist. He was one of a few bishops who publicly supported Archbishop Cordileone’s ban on Communion for House Speaker Nancy Pelosi earlier this year and has described the motivation behind the transgender movement as “demonic.”

But Coakley also presided over Catholic Relief Services while it was accused of promoting contraception and praised Joe Biden’s 2021 infrastructure bill although it included pro-LGBT provisions that threaten religious liberty.

Among the candidates with more consistently orthodox backgrounds, Archbishop Salvatore Cordileone stands out.

Archbishop Cordileone, well-known to faithful Catholics, has a long record of strong pro-life activism, defending Catholic teaching on homosexuality and gender, promoting reverent liturgy, and holding dissident Catholic politicians to account. He serves as the current chairman of the USCCB committee on marriage and family and has led the bishops’ outreach against a radical Democratic bill, the “Respect for Marriage Act,” which would enshrine same-sex “marriage” into federal law.

Bishop Kevin Rhoades of Fort Wayne-South Bend, who heads the bishops’ committee on religious freedom, has led prayer vigils and processions at abortion clinics, required Catholic teachers in his diocese to teach and live according to the faith, openly criticized the Biden administration for its radical anti-life and anti-family policies, and backed Archbishop Cordileone’s Communion ban for Nancy Pelosi. He has been supportive of the Latin Mass and traditional communities in his diocese.

Bishop Rhoades oversaw the development of the U.S. bishops’ 2021 Eucharistic document maligned by Catholics for failing to address the scandal of pro-abortion politicians receiving Communion.

The Indiana bishop and Archbishops Cordileone and Coakley joined a letter signed by more than 70 prelates this spring warning the Catholic bishops of Germany that their “Synodal Way” risks “schism.”

Archbishop Timothy Broglio of the Archdiocese for the Military Services, USA, the runner-up in the last USCCB vice-presidential race and a leading candidate for president this year, has instituted guidelines banning priests from involvement in ceremonies for homosexual partners and reiterating that people in homosexual sin cannot serve in lay ministries. He supported President Trump’s ban on gender-confused troops, condemned allowing open homosexuals to serve in the military, and has identified homosexuality as a root cause of clerical sex abuse. Archbishop Broglio was one a few bishop to vocally oppose bans on Mass attendance in 2020 and denounced vaccine mandates last year after initially urging Catholic servicemen to get jabbed.

In 2017, he did, however, support the Paris Climate Agreement, which subtly incorporates the U.N.’s pro-abortion agenda.

Bishop Michael Burbidge of Arlington also backed Archbishop Cordileone’s prohibition on Communion for Pelosi and said that he would enforce it in his diocese, which borders Washington, D.C. He made headlines last year for releasing a catechetical aid on gender declaring that “no one is transgender” and calling on Catholics not to use “preferred pronouns.”

But the Virginia bishop incensed many traditional Catholics when he shut down most Latin Mass parishes in his diocese earlier this year in accordance with Pope Francis’ motu proprio Traditionis custodes.