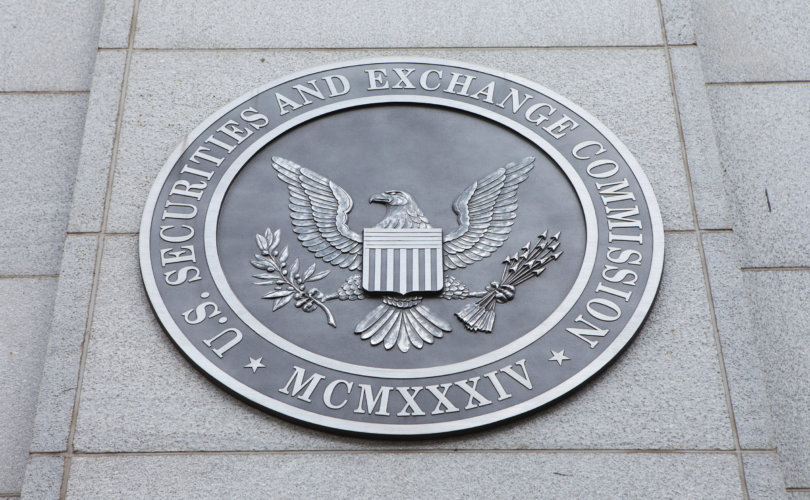 Emblem at the U.S. Securities and Exchange Commission in Washington, DC on November 26, 2016.Shutterstock.com

WASHINGTON, D.C. (LifeSiteNews) The nation’s financial markets regulator has approved a plan by Nasdaq to implement that all companies trading on its exchange meet diversity quotas.

The Nasdaq Stock Market first submitted its proposed rule change to the U.S. Securities and Exchange Commission (SEC) in December. It will affect roughly 3,000 companies.

Companies must turn over data on the racial, gender, and sexual identifications of board members. The new rule requires the companies to “provide statistical information in a proposed uniform format on the company’s board of directors related to a director’s self-identified gender, race, and self-identification as LGBTQ+.”

However, the policy, which is aimed at being “inclusive,” still leaves out other people who consider themselves marginalized.

A board with individuals with disabilities would be “better positioned to execute responsible governance, effective risk management, and optimal decision-making, as well as enhanced customer alignment, employee engagement, and transparency, as compared to those without,” the group said in its comments on the proposal.

“We are pleased that the SEC has approved Nasdaq’s proposal to enhance board diversity disclosures and encourage the creation of more diverse boards through a market-led solution,” Nasdaq said in a statement. “We look forward to working with our companies to implement this new listing rule and set a new standard for corporate governance.”

“Corporate board rooms, like all organizations, can benefit from a diversity of perspectives, but NASDAQ’s one-size-fits-all quota misses the mark,” Toomey told CNBC. “By defining diversity by race, gender, and sexual orientation, NASDAQ’s mandate will inevitably pressure companies to subordinate crucial factors such as knowledge, experience, and expertise when selecting board members.”

He said the SEC has become a “laboratory for progressive social engineering.”