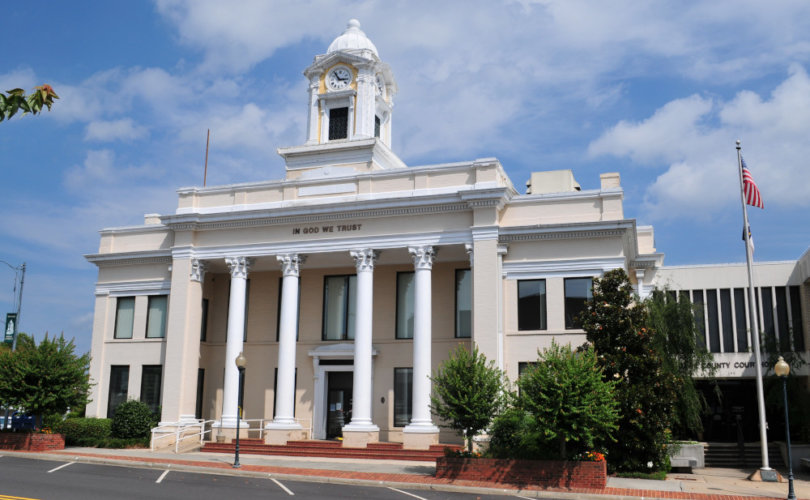 MOCKSVILLE, North Carolina, October 7, 2020 (Personhood Alliance) – On Monday, October 5, 2020, the Davie County Board of Commissioners voted unanimously to become the second Safe County for pre-born children in the nation, as part of the Personhood Alliance’s Safe Cities and Counties initiative. Major growth in this initiative is expected, not only in North Carolina, but across the country, as pro-life Christians decide not to wait for judges and politicians to fix our moral crises.

After unanimously passing the Safe County Resolution, Davie County joins neighboring Yadkin County, NC, in moving into the next phase of the Personhood Alliance’s Safe Cities and Counties initiative (formerly known as Sanctuaries for Life). So far, this project has planted Safe Cities in eight towns in Mississippi, two counties in North Carolina, and several locations in seven additional states, which are currently pursuing Safe City resolutions.

Pastor Keith Pavalansky, president of Personhood NC, who is leading the Safe County efforts in North Carolina, recalls the long road to the Davie County resolution:

The Davie County track to become a Safe County was strange, like all of 2020. Personhood NC began a two-pronged approach in January, gathering pastors to explain the effort and directly engaging the county commissioners at the same time. We delivered a resolution to the board of commissioners the first week of February, but the COVID-19 panic shut down the monthly commissioners’ meeting in March, and our resolution languished until this past Monday night. In the end, the board voted to become the second county in U.S. history to become a Safe County! This is truly an historic time.

The Safe City resolution marks the end of Phase 1 of the Personhood Alliance’s three-phased Safe Cities and Counties initiative and the entrance into the educational and community-building work of Phase 2.

The three phases of the Safe City strategy

The Safe Cities and Counties initiative was designed to replicate the approach of early Christians in shifting the culture and shaping the law.

In Phase 1, churches, leaders, and community members come together to encourage the county board or city council to pass a bold, but legally benign, resolution to establish the moral and legal foundation for becoming a safe city or county. For example, the resolution just passed in Davie County firmly and boldly declares the personhood of all human beings and local leaders’ duty to protect them equally under the law.

The city or county acts upon the resolution in Phase 2, when church leaders, council members and commissioners, and community and ministry leaders work together to build networks and support systems to serve local needs. During this phase, the Personhood Alliance helps to educate the Church, community members, and local authorities on personhood principles and how to apply them to all sanctity of life issues that affect the community, including abortion, fostering and adoption, human trafficking, the exploitation of children, unethical biotechnologies, disability discrimination, the crises in nursing homes, and many other threats specific to that local jurisdiction.

At the heart of Phase 2 is the desire and necessity for the Church to reclaim charity from the government. It is a time for Christians to make individual commitments to serve the needs of their own communities and share Jesus with those who are lost and broken. Ultimately, the goal is to make abortion and other direct attacks on human life and dignity both illegal and unthinkable. Only the Gospel can change hearts and minds on a relational level.

In Phase 3, the community takes peaceful, non-violent measures to exercise their constitutional authority and ignore the unjust ruling of Roe v. Wade and all its precedents. It is in Phase 3 that local authorities pass legally binding ordinances and interpose on behalf of the pre-born and all other victims of the culture of death.

The wisdom of the phased Safe City strategy

Pastor Pavlansky discusses the importance of the phased approach in protecting and preparing the community:

The wisdom of the Safe City strategy is that it eliminates early objections and legal concerns, as the first step is to simply pass a common sense, moral resolution. Passing a resolution will not incur any legal costs, unless the opponents suddenly think they can throw out the 1st Amendment. The opposition can scream all they want about the resolution — a powerful public statement — but they cannot sue … We now have a tool to pile up pro-life wins at relatively low costs. It just takes energy and the will to get it done in conservative areas.

Pastor Pavlasky notes there are sometimes objections from pro-life activists:

There are some criticisms to “only passing resolutions” from our own pro-life communities who want to immediately jump into legal jeopardy. I have noted to them that this is only our first step and that our resolutions carry as much legal weight as the Declaration of Independence did 244 years ago. Plus, the three-phased approach builds local awareness and understanding and prepares churches and civil leaders for the fight ahead.

The Personhood Alliance’s Safe Cities and Counties initiative is different than other sanctuary city models that pass legally binding ordinances to criminalize abortion as the first, and often only, step.

The efforts in Texas led by Sanctuaries for the Unborn and East Texas Right to Life, who recently announced the 15th city in Texas to become a “Sanctuary City for Unborn Children,” is an example. Similar sanctuary city efforts have occurred in Utah and New Mexico.

The Personhood Alliance’s phased strategy protects communities from legal challenges that burden and often stymie defiance-first or defiance-only approaches, like the ACLU’s lawsuit against the sanctuary cities in Texas. The three-step Safe Cities and Counties strategy does not defy federal or state law in the beginning, which can bring unnecessary and potentially damaging attention upon the community and its leaders before adequate support systems are in place.

The Safe City strategy also does not wait for Roe to be overturned, nor does it include exceptions, compromises, or other measures of delayed or inconsistent enforcement. Though the eventual outcome of a Safe City or County Resolution is equal protection through defiance of unjust laws, the path to get there focuses on the Church’s responsibility to end the legal killing of pre-born children and to defend against all other direct assaults on human life and dignity, at all stages.

The most effective pro-life ministry is local and relational. We’re seeing several sanctuary efforts being pursued by different groups now, but too often, they’re plagued with the same compromises and exceptions that have hurt the core mission of the pro-life movement for the last 50 years. These efforts intend to defy Roe — a goal we share. But at the same time, they wait for the unjust decision to be overturned.

We must engage in these local efforts to take back our towns and counties, and eventually our states, by applying consistent moral principles and rejecting judicial tyranny. And we must involve Christians in protecting children and families in their own backyards, while also making sure principled local leaders have a strong community support system for the battle ahead.

Pastor Pavlansky expects many more counties and towns in North Carolina and across the country to join the Safe Cities and Counties initiative:

The Personhood Alliance has all the support and data needed for any pastor or group to locally upend the injustice associated with Roe vs. Wade. The three-phased process is simple, and it results in extreme excitement and enthusiasm inside the churches and communities that participate. Both Yadkin and Davie counties have now begun creating a culture of life that will continue to spread across our state.

Published with permission from Personhood Alliance.