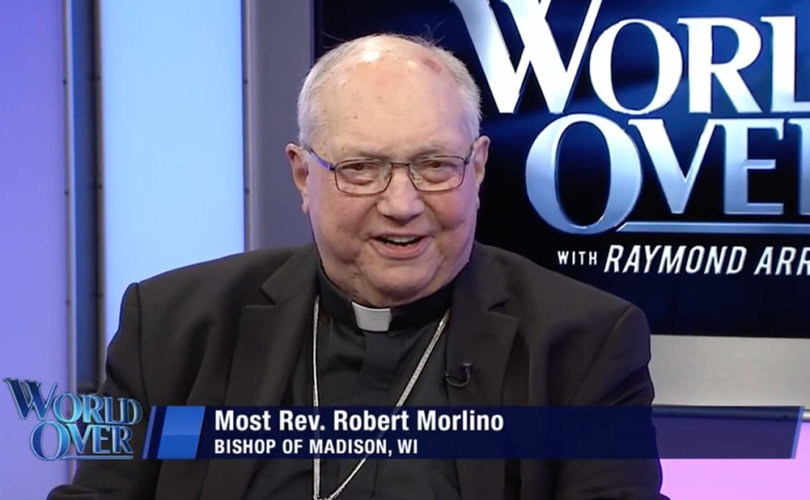 MADISON, Wisconsin, October 24, 2017 (LifeSiteNews) — A second U.S. diocese has communicated to its priests that active homosexuals in a “civil union” do not have free rein to a Christian burial.

The Diocese of Madison, Wisconsin, presided over by Bishop Robert Morlino advised priests in an October 21 communication how to handle a funeral request for a “person in a homosexual civil union.”

“My short answer to pastors and parochial vicars in these cases is to think through the issue thoroughly and prudently and likely call the local ordinary early in the process to discuss the situation,” the communication stated.

The communication, meant to be used internally by priests within the diocese, was leaked to the press on Sunday. The communication did not come from Bishop Morlino, as misreported by Pray Tell Blog, but from James Bartylla, vicar general of the diocese of Madison.

The communication states that “if the situation warrants (see canon 1184 – specifically canon 1184.1.3), ecclesiastical funeral rites may be denied for manifest sinners in which public scandal of the faithful can’t be avoided.”

“The main issue centers around scandal and confusion (leading others into the occasion of sin or confusing or weakening people regarding the teachings of the Catholic Church in regards to sacred doctrine and the natural law), and thereby the pastoral task is to minimize the risk of scandal and confusion to others amidst the solicitude for the deceased and family,” the communication states.

Some “general considerations” are offered to priests when considering a funeral request for public homosexuals.

“Was the deceased or the ‘partner’ a promoter of the “gay” lifestyle? Did the deceased give some signs of repentance before death?” the communication states.

The communication also states that “any surviving ‘partner’ should not have any public or prominent role at any ecclesiastical funeral rite or service.”

“There should be no mention of the ‘partner’ either by name or by other reference (nor reference to the unnatural union) in any liturgical booklet, prayer card, homily, sermon, talk by the priest, deacon, etc,” the communication adds.

Diocese of Madison spokesperson Brent King told LifeSiteNews that while the communication is “not an official diocesan policy,” it does, however, “conform with the mind of the bishop and meet his approval.”

“The communication, which took the form of a weekly e-mail to priests from the Vicar General of the diocese, was a result of pastoral questions asked by the priests themselves, and was to serve as a tool to provide some framework and considerations in this confidential setting,” he said.

The communication comes three months after Illinois Bishop Thomas Paprocki issued guidelines that explicitly state that those in same-sex “marriages” should not be admitted to Holy Communion, nor receive a Catholic funeral if they died without showing signs of repentance.

Prior to this, Oregon Archbishop Alexander Sample released guidelines in May that stated that Catholics in “serious sin” – specifically mentioning active homosexuals and those in adulterous unions – must repent before receiving Communion. Philadelphia Archbishop Charles Chaput issued similar guidelines in July 2016.

Homosexualist activist and Vatican adviser Fr. James Martin criticized the Diocese of Madison’s funeral directives in a series of five posts on Twitter, saying to his tens of thousands of followers that they amounted to “discrimination.”

“There is no focus on the sexual morality of straight Catholics at the time of their funerals … The (sic) focus solely on LGBT people and their morality is an instance of what the Catechism calls ‘unjust discrimination,’” he said.

But Fr. John Zuhlsdorf, a priest in the diocese of Madison, criticized  Fr. Martin for using what he called communist tactics against Bishop Morlino in presenting him as an “‘Enemy of the People’ to the mobs” for “attack and public abuse.”

“The new catholic Left cadres have received signals from on high and they are now starting to target anyone whom they deem might not tow their party line. They are whistling and pointing to (what Communists called) Enemies of the People,” he wrote on his blog.

“What is more disturbing is the trend building among the catholic Left, of building an Enemies List. It’s downright evil,” he added.

“So, James Martin, SJ, smeared Bp. Morlino – in public – and with something inaccurate. Now watch the black and chilling sleet of hatred that he initiated… on purpose. I suspect the Jesuit doesn’t care, because his task was fulfilled,” he said.

Bishop Morlino is considered by many faithful Catholics to be among the most orthodox bishops in the United States.

Earlier this year, he asked his entire diocese to begin receiving Holy Communion on the tongue while kneeling so as to increase “reverence” for the Real Presence of Christ in the Eucharist.

Last year when  Vatican Liturgy chief Cardinal Robert Sarah asked clergy to adopt the ‘ad orientem’ — facing the East — position for Mass in time for advent, Morlino was one of the first bishops in the Church to respond to the call.

Morlino has also asked that tabernacles be returned to the front and center of every church in his diocese.

When the Bishop first came to the Diocese of Madison in 2003, there were only six men studying to be priests. Under his leadership, that number increased sixfold in 12 years.