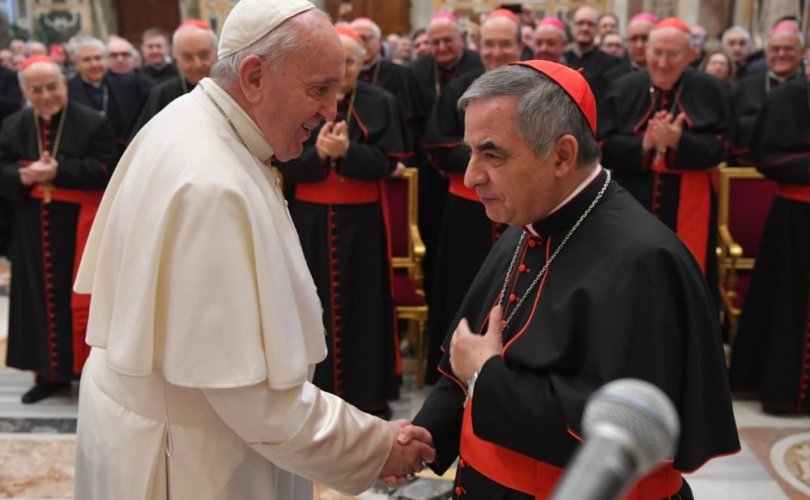 VATICAN CITY (LifeSiteNews) — A secret recording of a conversation between Pope Francis and one of his top cardinals was recently listened to by a Vatican court as evidence in a criminal case against the cardinal for financial malpractice.

In Cardinal Angelo Becciu’s ongoing trial for embezzlement and abuse of office, the Vatican’s criminal court last Friday listened to a phone conversation between Pope Francis and Becciu that was secretly recorded in the summer of 2021.

In the recording, Francis was asked to confirm authorization of payments for the ransom of a kidnapped nun in Africa in the amount of 350,000 euros to the British firm, Inkerman Group — which was helping secure the ransom — and 500,000 euro as the ransom fee.

The conversation took place on July 24, 2021, and was recorded by a third party present in the room with Becciu.

Just 3 days later, Becciu’s trial on charges of embezzlement and abuse of office began at the Vatican. The charges are related to the infamous “London apartment deal” in which the Holy See lost 200 million euros in a risk investment made by the Secretariat of State — of which Becciu was second in charge at the time — in which the transactions were kept obscure during the official audit.

During the playing of the recording in the courtroom, journalists were asked to leave, but a transcript was later published by the Italian news agency Adnkronos. The transcript had been received from the Italian Financial Police and its contents were confirmed to journalists by three defense lawyers from the case.

Becciu has made headlines recently due to a lawsuit filed against him by the former Auditor General for the Holy See, Libero Milone, in the amount of nearly 10 million euros for damages to his reputation and career following what Milone has stated was a forced resignation from his role as Auditor General in 2017.

Milone had begun to uncover numerous cases of embezzlement and money-laundering by top-ranking prelates and offices within the Holy See, including the opaque investment into the London apartments by Becciu.

Milone has submitted documentary evidence for over 20 counts of financial malfeasance and has stated that he is prepared to make the evidence public should the Vatican refuse to deal with the case.

In response to Milone, Becciu has reopened a case against him, charging him with spying and embezzlement. Milone has stated that he will make public documentation from his audit should it be necessary to clear his name of these charges.