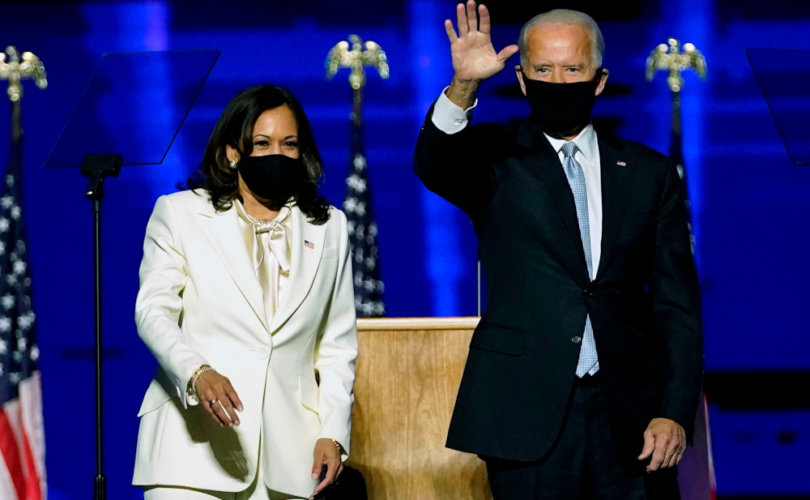 WASHINGTON, D.C., December 9, 2020 (LifeSiteNews) — Secular Democrats of America PAC (SDA) provided former Vice President Joe Biden with a number of radical proposals, calling on him to reverse many of Trump’s actions in defense of religious liberty, and saying the “rise of white Christian nationalism is a national security threat.”

The document issued by SDA at the end of November says the “religious right has scapegoated nonbelievers” — a claim described by WND as a call to “pounce on U.S. Christianity.” In the preamble to the 28 pages of text, SDA outlines the purpose of the work as providing “recommendations that will not only reverse the damage done by the Trump administration but boldly restore a vision of constitutional secularism and respect in the land for religious and intellectual pluralism.”

The document closely aligns itself with the policies of the Obama administration, describing how he “stood with us on a number of occasions,” and proposing ways in which to “build upon the Obama-Biden administration’s legacy to implement strong protections for constitutional secularism.”

Religious institutions and organizations are repeatedly highlighted in the document, as SDA proposes removing any preferential or particular treatment which religious groups enjoy. Religious schools would be required to “teach curricula in accordance with national secular standards,” if receiving government funds. SDA also calls for the cessation of all taxpayer funds to “contractors or grantees that discriminate on the basis of religion or to programs that promote a sectarian agenda, such as private religious schools, crisis pregnancy centers, and abstinence-only sex education.”

SDA further demands that “all nonmedical exemptions to mandatory vaccination for children in schools and day care” are repealed, and for a reversal of “all sectarian-based restrictions of federally funded fetal-tissue and stem cell research.”

“Crisis pregnancy centers and abstinence only education programs” are described as an “ineffective use of taxpayer dollars” which cause demonstrable harm to vulnerable communities.” Instead, a Biden administration is asked to “fully and robustly fund comprehensive, medically-accurate sex education.”

The proposed policies also would allow governors to implement restrictions on churches, particularly with regard to COVID-19. The SDA asks for an Attorney General who would support governors, whose orders “require even-handed universal restrictions on indoor gatherings, including at houses of worship, to help prevent the spread of COVID-19.”

Not content with this, the proposals then present a new form of patriotism, a move which is dubbed “reframing Patriotism.” In order to disentangle “the conflation of faith and patriotism,” SDA says that phrases such as “God and country” should be avoided in public addresses.

The “rise of Christian nationalism” must be stopped, and faith must be disassociated from being the “de facto source of morality.” Even the U.S national motto, “In God we trust,’” is attacked for being “a relic of McCarthyism and the anti-atheist hysteria of the 1950s.”

“It has been invoked by Christian nationalists to reinforce their historically revisionist narrative of our nation’s founding.” Instead of the current motto, the SDA demands a return to ‘E pluribus unum’ as the official motto of the nation.

Furthermore, the document calls for the repealing of “[all] rules, regulations, memoranda, and other actions regarding federally administered health care programs that sanction denial of care on the basis of religion.”

In an extensive appendix, styled as non-exhaustive, the paper presents ways for Biden to “reverse the damage done to religious freedom by the Trump administration, and identify strategies to build upon the Obama-Biden administration’s legacy to implement strong protections for constitutional secularism.” Listing dozens of executive orders, rules, departments and other actions which SDA deems offensive to secularists, the document concludes that they should be repealed or dismantled.

Also on the list to be abolished is the “Religious Liberty Task Force,” which is described as “likely driven by the religious right’s agenda,” as well as the “Commission on Unalienable Rights,” and the HHS Conscience and Religious Freedom Division.

Joe Biden, meanwhile, considers himself to be a Catholic, not a secularist. At the same time, he supports numerous positions, especially on abortion, homosexuality, and gender ideology, that contradict Catholic teaching, and Christianity at large.