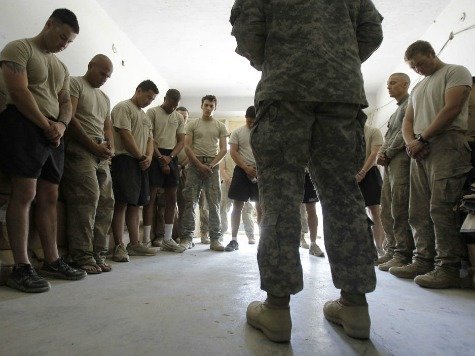 The four videos show chaplains Scott Ingram and Amy Smith offering comfort and perspective to those struggling with the threat and response to COVID-19. In one, Ingram notes that “God encourages us not to be dismayed by what we see around us, things we cannot control. We can, however, with the best intel in this moment, place our trust in him, walk forward in his strength, and treat others with kindness.”

Claiming to have received complaints about the videos from eight active-duty soldiers in the Division, the so-called Military Religious Freedom Foundation (MRFF) sent a complaint demanding that the “illicit proselytizing videos” be removed from the main page (which has more than 7,800 followers) and relegated to the Fort Hill Chapel Facebook page (which has fewer than 400).

The videos were taken down within hours, the Christian Post reports.

“I personally spoke on the phone this morning to the senior leadership staff of [Maj. Gen.] Brian Mennes, the 10th’s Commanding General, as well as subordinate senior staff of [Col.] Matt Bresko, the Commander of the 10th Mountain Division Sustainment Brigade,” declared MRFF president Mikey Weinstein. “These senior Fort Drum staffers were professional and courteous and seemed to understand well the position of MRFF in advocating for our active duty Army clients under their command.”

“MRFF and its military clients would greatly prefer that the Army would have taken this action sua sponte (‘ON ITS OWN’),” Weinstein continued, “without having to cause MRFF to make these obviously valid demands to ensure church-state separation in the first place on behalf of aggrieved Army personnel who justly fear reprisal, retribution, revenge and retaliation for taking their grievances up the chain of command.”

“At a time when our nation is hurting and many feel hopeless, why on earth would Mikey Weinstein attack prayer?” First Liberty Institute attorney Mike Berry responded in a statement to Fox News. “America has the strongest military in history, but our brave service members are not immune to the havoc COVID-19 has wreaked.”

“I cannot believe the legendary U.S. Army’s 10th Mountain Division raised the white flag of surrender to an anti-religious freedom zealot,” Berry continued. “Every president, from Washington to Trump, has publicly prayed for our military. If the commander in chief can pray, then our soldiers can, too.”

The MRFF is most well known for pressuring the U.S. military to quash benign, non-coercive expressions of faith. It has taken credit for getting Bibles removed from Missing Man Tables across the country, demanded punishment for chaplains who wore their uniforms to an event hosted by a religious liberty group, and agitated for heavy restrictions on proselytizing by military chaplains.

“In 2015, (Weinstein) wrote a blog post calling for the ousting of Christian chaplains who disagree with same-sex ‘marriage,’ and also demanded that Satan, Allah[,] Odin and others be added to a ‘God bless the military’ display in Hawaii,” Christian News adds.