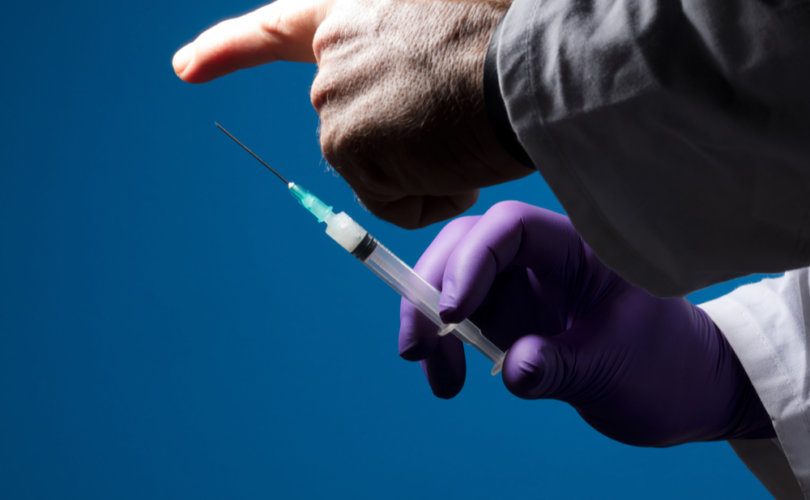 (LifeSiteNews) — A security guard working at a vaccine clinic in Alberta says he saw “hundreds” of people – the majority of them young – experience terrible reactions after taking the COVID jabs, which led to him refusing to take the shots himself.

In an interview last week with the Western Standard, Albertan security guard Bob Burke said the adverse reactions he witnessed while working as a contractor at an unnamed vaccine clinic in Alberta starting in December of 2020, became so numerous that staff began placing “mats outside all the rooms because so many people were either fainting or feeling faint and had to lay down.”

Burke, who said the incidents “started to disturb me,” told the outlet that while there were some reactions among those who were over 50, it was nothing like what started happening after those under 50 were able to receive the shots.

Getting into specifics, Burke noted dozens of instance of people whose “legs would give out and they’d just collapse,” which according to him was happening frequently enough that the clinic staff started to “close the door so nobody would see.”

Burke relayed one story in particular in which he witnessed a young man have what appeared to be a seizure.

“He dropped his phone, and I went to grab it for him,” recalled Burke, noting that by the time he picked up the phone, the man was “banging his head against the wall because he was in convulsion.”

He also said he witnessed a “little girl who was doubled over and had an ice pack on her neck,” and by the time she “walked by and she looked at me… her face was the same greenish-grey color of a corpse.”

What surprised Burke was that even when people witnessed what was happening, they still stayed in line to get the jabs.

Burke stated that the situation became so grim, a receptionist working at the clinic told him she did not know how much longer she could work there after witnessing a young boy “screaming” in pain right after getting the jab.

“[A]t our yearly flu vaccine sites I’m pretty sure they don’t have the rooms outside for people who fainted. None of this is normal,” he stressed.

Burke also mentioned that he had previously tried to go public with his experience, but no news outlets would hear him.

Despite constant assurance from politicans and the mainstream media that the novel shots are “safe and effective,” the Public Health Agency of Canada (PHUC) does admit that side effects from the COVID jabs are common, with the most recent figures showing that there have been 51,035 “adverse” reactions following the COVID jabs, with a total of 10,323 of these events having been classified as “serious.”

Moreover, recent autopsy data has also begun to show a close association between the COVID mRNA jabs and heart inflammation, and according to two recent medical studies from Europe, vaccine-induced blood damage may explain the many of the harmful impacts of the COVID shots.

Burke is not the only Canadian to sound the alarm about what may be occurring in vaccine clinics. On September 14, in Alberta’s neighboring province of Saskatchewan, the family of a woman named Carol Pearce said she died immediately after getting a COVID booster at a drugstore in the city of Saskatoon.

While government COVID measures are no longer in place, under former premier Jason Kenney, Alberta enacted strict COVID mandates throughout the province, including a vaccine passport system for entrance into a variety of public places. The government also heavily promoted the jabs through million-dollar advertising campaigns.

However, Albert’s new premier, Danielle Smith, who took over as leader of the United Conservative Party (UCP) last week, has vowed to approach COVID differently, going as far as saying the vaccine-free have been the most “discriminated against” group in her lifetime.

Despite this, Canadian Prime Minister Justin Trudeau threatened Canadians just this week that he may begin to reimpose health measures he had previous enacted should people not get the COVID boosters and flu shots this fall.