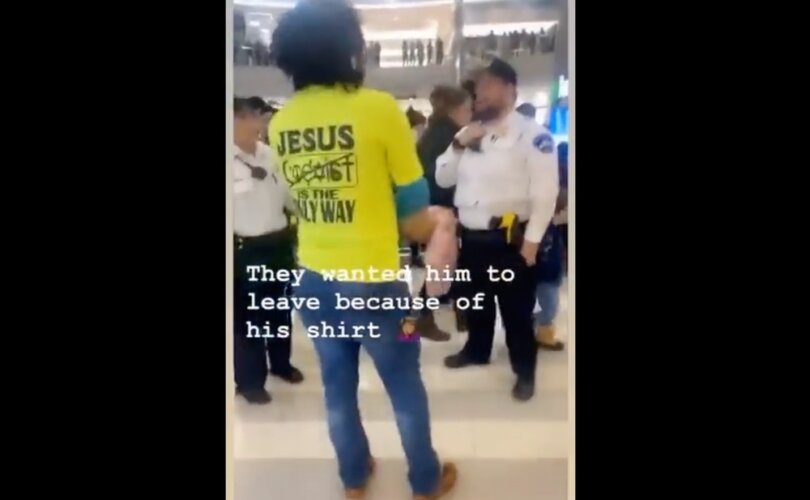 BLOOMINGTON, Minnesota (LifeSiteNews) — A man wearing a t-shirt with a Christian message at the Mall of America was ordered to remove the shirt or leave the premises earlier this month because other mall-goers were reportedly “offended.”

A video of the incident went viral online, drawing outrage from Christians and others concerned about religious liberty.

The incident took place on January 7 at the Mall of America shopping center in Bloomington, Minnesota, Daily Mail.com reported.

The video shows the man, identified by The Daily Signal as Paul Shoro, wearing a bright yellow shirt with a message reading “Jesus saves” on the front. The back of the shirt depicts a crossed out “Coexist” symbol along with the phrase: “Jesus is the only way.”

In the video, a mall security guard tells Shoro that he needs “to take off that shirt” in order “to shop here.”

“Jesus is associated with religion and it is offending people,” the security guard said. “People have been offended.”

The security guard has alleged that the man in the video was engaging in “religious soliciting” in violation of mall rules.

Despite Shoro’s protestations that he “didn’t say anything” and “just went to Macy’s,” the guard informed him that his only options were to “take the shirt off and… go to Macy’s” or to “leave the mall.”

It’s unclear whether Shoro had attempted any evangelization efforts in the immediate lead-up to the video.

According to the report, mall security had asked him to leave a week earlier and handed him a “24-hour trespass” because he had been “soliciting guests.”

A spokesman for Mall of America told Daily Mail.com that despite the more recent altercation, Shoro was ultimately permitted to stay at the mall without removing the shirt. Shoro, however, told The Daily Signal that authorities had “forced” him to remove the shirt.

The video footage has sparked outrage online among Christians and others who came out in support of the Christian mall-goer.

“Jesus Saves! I love the message on this man’s t-shirt — but the Mall of America in MN didn’t,” reacted Samaritan’s Purse president and CEO Franklin Graham, son of famous preacher Billy Graham.

“The truth is, any other message wouldn’t have been deemed offensive — even if it was,” Graham remarked. “Only the Name of Jesus draws such opposition. The back of his shirt said, ‘Jesus is the only way.’ This is the ‘offensive’ truth the world so desperately needs to hear — Jesus saves souls from Hell.”

The truth is, any other message wouldn’t have been deemed offensive—even if it was. Only the Name of Jesus draws such opposition. The back of his shirt said, “Jesus is the only way.” This is the “offensive” truth the world so desperately needs to hear—Jesus saves souls from Hell.

“These mall cops kick out a black man for wearing a ‘Jesus Saves’ T-shirt at the mall of America,” remarked a Twitter user named Vince Langman. “But if he was wearing a BLM shirt, they’d bend the knee.”

Pastor Chase Thompson suggested that Shoro “should sue them into oblivion,” pointing out that the incident “certainly wouldn’t have happened if he’d had a pride shirt on and even 50 people complained.”

Alpha News pointed out that about a year before the viral altercation Mall of America had hosted an “all ages” drag show.

Mall of America also partnered with the City of Bloomington in putting on a summer “pride celebration” in August 2022, featuring “kids’ activities” and “family fun.”