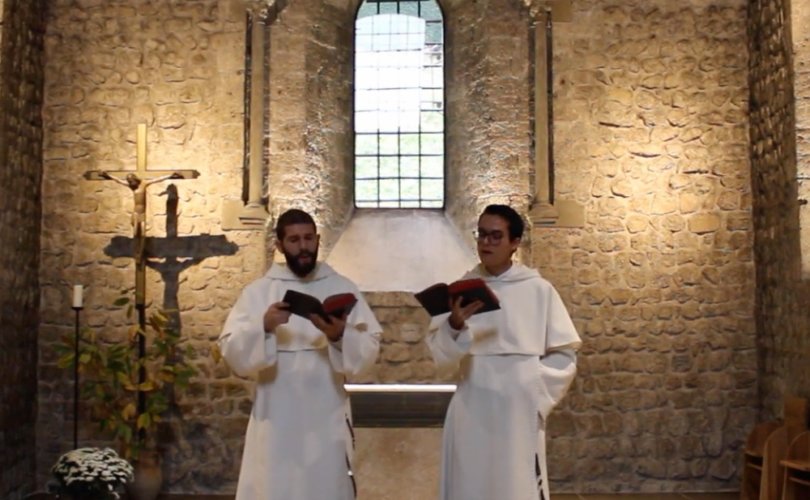 December 10, 2019 (LifeSiteNews) – A new YouTube channel started by young seminarians in Switzerland is teaching people around the world about beauty and tradition in the Catholic liturgy.

The channel is the project of Brother Alexandre Frezzato, from the Wallis region in Switzerland, and Brother Stefan Ansinger, from the Netherlands. Both study at the University of Fribourg in Switzerland and are Dominican seminarians. The brothers provide a weekly private class in Gregorian chant to anyone willing to learn.

The channel got started in October 2019 and has already received thousands of hits from around the world. Brothers Alexandre and Stefan are just starting, though. It’s now Advent, the beginning of a new liturgical year, so those who subscribe to the channel can follow the Church’s liturgical year with the brothers.

Brothers Alexandre and Stefan hungered to learn about and share with others the Gregorian chant tradition of their Dominican Order, which is 800 years old. These ancient Latin chants are, paradoxically, more popular among young people than they are with their older superiors. The Dominican tradition of Gregorian chant, which varies slightly from that of other orders, includes all the liturgical hymns and antiphons of the Catholic year in unique musical settings.

Over the past 50 years, much of this heritage has been neglected, as communities opted for contemporary compositions in vernacular languages. Yet instead of complaining about a lack of knowledge of tradition, these two seminarians, both in their early 20s, took action.

Brothers Alexandre and Stefan have melded the ancient with the ultra-modern: using an inexpensive digital camera and editing software available online, they are producing beautiful videos that aim to promote and teach Gregorian chant.

Every week, they release on their YouTube channel a new Gregorian masterpiece, filmed in a beautiful European architectural setting.

There are many places to hear Gregorian chant on YouTube, but this new channel, called OPChant, is unique. Each video is performed as neutrally as possible, clearly and carefully. In the description under each video, there is a link to a PDF of the sheet music with words in Latin, so viewers can sing along.

This new channel is also different because the young friars closely follow the calendar of the Church's year. They release new videos with enough time given to learn a new piece before it is called for in the liturgy. For example, the introït or entering antiphon “Ad te levavi” – which is used during Advent – was posted right at the end of November. The famous “O” antiphons for the final week of Advent will come up during this month. The seminarians hope that, this way, communities can learn the music in context. For those learning alone, the brothers explain, these ancient Latin chants can be a powerful form of prayer tied to the cycle of the liturgical year.

The seminarians explained that they invite anyone interested in the rich musical heritage of the Catholic Church to subscribe, learn, and sing along. Gregorian chant has been an inspiration and a point of access for many who are not Catholic but are curious about the Church's history. Subscribing is as easy as going to OPChant, clicking “Subscribe,” and clicking on the bell to receive notifications.

Church insiders in Western Europe have already pointed to the symbolic power of this new video project. Gregorian chant is a hallmark of tradition in a turbulent time for Catholics, and, they say, boosting the number of subscribers shows these seminarians and their superiors that there are many in the world who are passionate about Gregorian chant.

Jake Ross is a young husband and father living in Milwaukee, Wisconsin. He is a co-founder of the website Cream City Catholic.