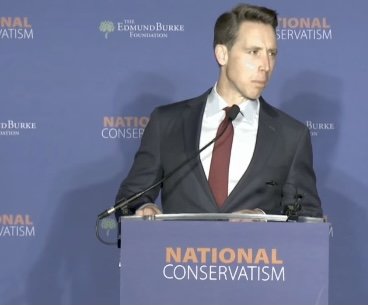 ORLANDO, Florida (LifeSiteNews) — Pro-life U.S. Sen. Josh Hawley of Missouri took the stage at the National Conservatism Conference on Sunday to rally conservative men to fight for traditional American values against the predations of a Left intent upon the “deconstruction” of authentic liberty.

Hawley, a 41-year-old Christian husband and father who graduated from Yale and clerked for Chief Justice John Roberts before becoming the youngest member of the U.S. Senate in 2019, told the audience in a keynote address, “We meet at a time of reckoning.”

“As we speak, the Left controls the commanding heights of American society. They have the White House, the House of Representatives, the Senate. Their voices predominate in the news media, in Hollywood, arguably sports, and, of course, at our universities,” Hawley said.

The Missouri senator, who topped headlines last week when he told Biden-appointed Attorney General Merrick Garland he should “be ashamed” for “intimidating parents” by mobilizing the FBI against those concerned about policies and curriculum in schools, said the Left has a “grand ambition to deconstruct America.”

The senator observed that the Left wants to redefine “traditional masculinity” and “traditional masculine virtues” such as “courage, independence, and assertiveness” as “toxic,” and has been “delivering this message from every platform where they have power, which is most everywhere.”

“Hollywood delivers the toxic masculinity theme ad nauseum in television and film,” he said, and noted that in universities, where “curricula abound with seminars on masculinity and its defects,” male attendance has sharply declined in recent years.

The Republican senator said “the message of toxic masculinity” has extended even into elementary schools, “where boys are increasingly treated like an illness in search of a cure. If boys are too rambunctious, they’re diagnosed with hyperactivity disorder and medicated into submission.”

“Many men in this country are in crisis, and their ranks are swelling,” Hawley said, arguing that a sustained cultural attack on masculinity has led to heightened rates of anxiety, depression, substance abuse, and addiction to video games and pornography among American men.

“Can we be surprised that after years of being told they are the problem, that their manhood is the problem, more and more men are withdrawing into the enclave of idleness, and pornography, and video games?”

But the senator said that the dilemma is not one exclusively experienced by the men themselves. According to Hawley, the crisis among American men presents “a crisis for the republic.”

“The problem with the Left’s assault on the masculine virtues is that those self-same qualities, the very ones the Left now vilify as dangerous and toxic, have long been regarded as vital to self-government,” he said.

“Liberty requires virtue,” Hawley said, “and, in particular, it requires the manly virtues.”

“America needs good men,” the senator stated. “The liberty of a republic is a demanding thing. To keep a republic, you have to be willing to fight for it. To share in self-government, you have to stand strong against those who would try to make you dependent on their wealth or influence. To preserve liberty, you have to discipline your passions and sacrifice in the service of others.”

“Liberty requires virtue, and in particular it requires the manly virtues.”

Hawley posited that the ability of America to raise up good men “will determine the success of our long experiment in liberty.”

While sounding the alarm about the extent of the threat against American masculinity, the Republican legislator said there is “cause for hope” since the “assault” by the Left “has not yet succeeded.”

Arguing that “we must make it our aim as conservatives to see that it does not succeed,” Hawley called for “a revival of strong and healthy manhood in America.”

The senator explained that for decades, American policies have “helped destroy the kind of economy that gave meaning to generations of men” by outsourcing domestic manufacturing jobs overseas, and making it nearly “impossible for family farmers to compete against multinational firms,” resulting in “fewer and fewer men working,” a situation that he said has contributed to fewer men choosing to get married.

To fix the problem, Hawley contended that “we must rebuild an economy in this country in which men can thrive. And that means rebuilding those manufacturing and production sectors that so much of the chattering class has written off as relics of the past,” adding that Americans “have been the makers of great and mighty things, and we shall be again.”

Sen. Josh @HawleyMO: “We must rebuild an economy in this country in which men can thrive. And that means rebuilding those manufacturing and production sectors that so much of the chattering class has written off as relics of the past.” https://t.co/8uFHslIGFF

The legislator decried the U.S. government’s decades-long reliance on cheap overseas labor, including slave labor, instead of bringing production back home to provide well-paying jobs with which American men can support their families and build up the strength of their own nation.

“It is free labor worthy of free men that we are after,” he said. “We must make every effort to restore a vibrant manufacturing sector in this country that can employ working men at living wages — wages that can feed a family and support a community. And we can start by requiring that at least half of all goods and supplies critical for our national security be made in the United States.”

Hawley also pointed out that communities “begin with the family,” noting that “we must make the family the center of political life.”

“We should be clear in the message we send about family and unapologetic: There is no higher calling, and no greater duty, than raising a family. And we should encourage all men to pursue it,” he said, calling for “explicit rewards in our tax code for marriage.”

Hawley finally called upon American men to use their “strength,” “power,” “creativity,” “courage,” and “faithfulness” to defend traditional values against a Left that tells men they are “evil” and must “be reformed.”

“To each man, I say: You can be a tremendous force for good. Your nation needs you. The world needs you,” he said. “Your strength can liberate others. Your power can serve those in need. Your creativity can light new paths. Your courage can defend the weak. Your faithfulness can raise up sons and daughters after you and make their way straight. You can make this a more perfect nation.”

“American men are and can be an unrivaled force for good in the world,” he concluded. “if we can strengthen them, if we can empower them, if we can unleash them to be who they are made to be. Then they shall, in the words of Scripture, ‘build up the ancient ruins; they shall raise up the former desolations; they shall repair the ruined cities, [and] the devastations of many generations.’ God bless you. Good night.”