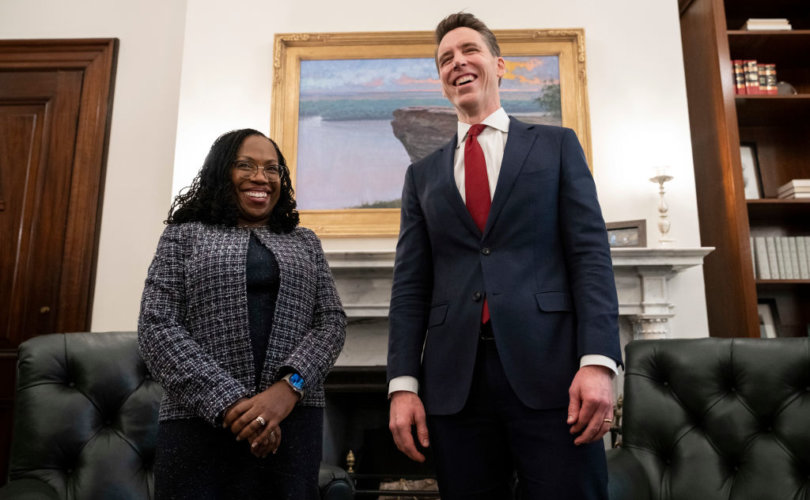 In a lengthy Twitter thread late Wednesday, Senator Hawley presented the findings from his investigation of Judge Jackson, nominated to the Supreme Court (SCOTUS) by Biden on February 25.

I’ve been researching the record of Judge Ketanji Brown Jackson, reading her opinions, articles, interviews & speeches. I’ve noticed an alarming pattern when it comes to Judge Jackson’s treatment of sex offenders, especially those preying on children

Referencing Jackson’s past record as outlined in her “opinions, articles, interviews & speeches,” Hawley presented evidence of what he described as an “alarming pattern when it comes to Judge Jackson’s treatment of sex offenders, especially those preying on children.” This was consistent through her time on the federal bench, as well as while a member of the U.S. Sentencing Commission, noted Hawley.

Examining her record as far back as during law school, Hawley highlighted Jackson opposed making “convicts register as sex offenders — saying it leads to ‘stigmatization and ostracism.’” Jackson, 51, is currently a judge on the U.S. Court of Appeals for the District of Columbia.

He highlighted how Jackson has a consistent record of seeking to downplay the weight of crimes around possession of child pornography, including her suggestion that individuals who posses such images might do so for the sake of “the collection,” rather than for nefarious purposes. Hawley shared a screenshot of the official transcript, in which Jackson asked: “So the people who are in this for either the collection, or the people who are loners and find status in their participation in the community, but would be categorized as nonsexually motivated, how many are we talking about?”

Such a view, Hawley suggested, was behind Jackson’s 2012 belief that “there may be a type of ‘less-serious child pornography offender’ whose motivation is not sexual but ‘is the challenge, or to use the technology.’”

“In her time on the U.S. Sentencing Commission, Judge Jackson said she ‘mistakingly assumed that child pornography offenders are pedophiles’ and she wanted ‘to understand this category of nonpedophiles who obtain child pornography,’” observed Hawley.

Sen. Hawley met with Jackson March 9, as part of her build-up to her confirmation hearings, which will begin March 21. Hawley posted online afterwards that he had quizzed the judge at length, “especially about her defense of Guantanamo Bay terrorists & on criminal justice.”

“The hearings will be critical to understanding why she has taken these position,” Hawley added.

However, in the days since their meeting, Hawley’s further research into Jackson’s record now led him to describe it as “disturbing,” particularly that she is “nominated to the highest court in the land.”

“Protecting the most vulnerable shouldn’t be up for debate,” he said. “Sending child predators to jail shouldn’t be controversial.”

He also decried the “stonewalling” from the Sentencing Commission, which has so far “refused” to hand over Jackson’s full record for her nomination confirmation hearings.

Hawley was supported in his warning about Jackson by Republican candidate for governor of Nevada, Joey Gilbert, who wrote: “This judge is not getting in on our supreme court. Let’s make sure this does not happen.”

Prior to Biden’s nomination of Judge Jackson, Hawley warned Democrats that if Biden continued “to tear apart this country w/ a woke activist” as a nominee, then he should “expect a major battle in the Senate.”

Moment of truth for Joe Biden. Will this deeply unpopular & divisive president finally reject the radical elements of his party and nominate someone who loves America and believes in the Constitution? Or will he continue to tear apart this country w/ a woke activist? https://t.co/FCKDBZUine

Jackson has been described by pro-life advocates as being radically pro-abortion, saying that her record on abortion “is so extreme that horrifying late-term abortions will again be in the news.”

LifeSiteNews contacted the U.S. Sentencing Commission for comment, but was unable to reach a spokesman.