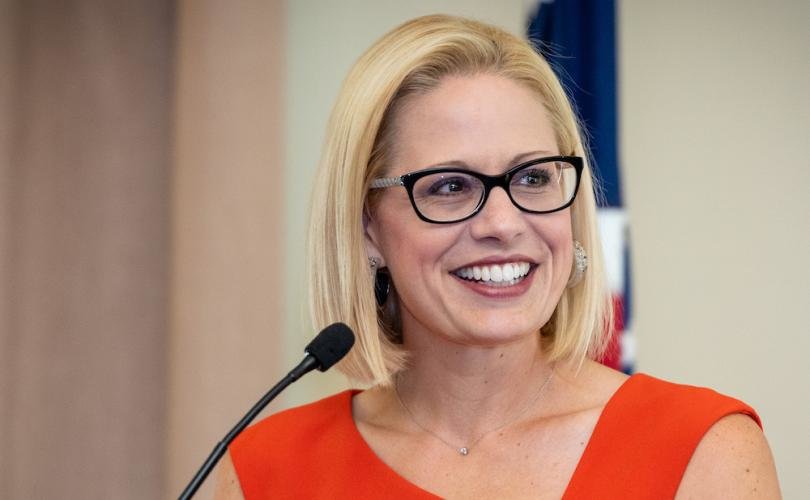 (LifeSiteNews) – Pro-abortion U.S. Senator Kyrsten Sinema of Arizona stunned the political world Friday by announcing she was changing her party affiliation from Democrat to Independent, prompting speculation as to the implications for the future.

“Everyday Americans are increasingly left behind by national parties’ rigid partisanship, which has hardened in recent years,” Sinema explained in an AZ Central op-ed. “Pressures in both parties pull leaders to the edges, allowing the loudest, most extreme voices to determine their respective parties’ priorities and expecting the rest of us to fall in line.”

Over the past four years, I’ve worked proudly with other Senators in both parties and forged consensus on successful laws helping everyday Arizonans build better lives for themselves and their families. 2/3

An open bisexual, Sinema is a conventional Democrat on abortion and LGBT issues, but has dissented from her party on others, most significantly their desire to abolish the Senate’s 60-vote filibuster threshold for most legislation – a prerequisite for enacting Democrats’ most transformative agenda items, such as codifying a national “right” to unlimited abortion or eliminating states’ ability to secure their elections.

Sinema stressed that she would continue in her “unwavering view that a woman’s health care decision should be between her, her doctor, and her family,” and that “LGBTQ Americans should not be denied any opportunity because of who they are or who they love,” among other positions.

Sinema has also said she will not caucus with Republicans; one of her colleagues, Democrat Sen. Amy Klobuchar of Minnesota, downplayed the significance of the change by noting that Sinema “tends not to go to the caucus meeting […] except for rare moments where she’s advocating for something she cares about.”

— Article continues below Petition —
Stand with faithful Archbishop Timothy Broglio as the NEW President of the United States Conference of Catholic Bishops!
Show Petition Text
9985 have signed the petition.
Let's get to 10000!
Thank you for signing this petition!
Add your signature:
Show Petition Text

Many have speculated as to Sinema’s motives for the switch, and how it will impact both her political future and legislation in the incoming Congressional session.

I don't think any of that matters that much. She'll likely still caucus with the Dems.

But the move means she's not going to fold on the filibuster. It's a shot across the bow on that front, rebuking Dem leadership. That's the win. The rest is probably status quo. https://t.co/PA82XI6O6h

This explains why it's in Sinema's best interest to leave the party but continue caucusing with Dems; she gets to sidestep a primary challenge and dare the Dems to risk a general election challenger who would likely end up spoiling the race so a Republican could win. https://t.co/gF298YiP0L

I will say: this video from Sinema makes the party switch to independent feel like a 2024 campaign launch. https://t.co/dgvkceGoCs

Krysten Sinema is smart and is trying to get ahead of her 2024 re-election.

She knows she needs to start creating distance now from the Democrat Party.

This also shows how pessimistic she must be on where the economy is going and how 2024 voter sentiment will be affected.

Think we’ll get more fawning media pieces over Sinema’s history-making as a member of the LGBTQ community today?

Last month’s midterm elections gave Democrats a 51-seat Senate majority while giving Republicans narrow control of the U.S. House of Representatives. Sinema’s defection reduces Democrats’ official total back to the same 50 it was before, though Republican seats remain reduced to 49, and as a practical matter the results will vary depending on individual votes.